No One Is Alone: Affirmations for Life Change

Lifelong friends, screenwriter Tracey Jackson and musician Paul ("Evergreen") Williams have a lot in common: great wit, great talent, and a gift for friendship. One thing they haven’t shared, however, is addiction. But while Paul spent many years decidedly unsober and Tracey has not, she’s all plenty aware of how we all practice self-limiting behaviors. These two understand each other as only best friends can. (Watch them soon on Oprah Winfrey’s Super Soul Sunday.) Together, they’ve written a book about all the ways we can mess up even the “healthiest” lives, and ways to unmess them. 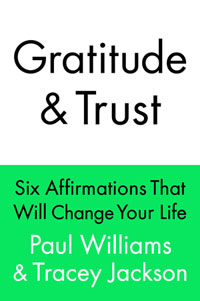 Q: What inspired you to write Gratitude & Trust now?

Tracey Jackson: I don’t think it was a matter of “now” versus “then” or “in the future.” For me it is a topic I have been playing with for years. I have always felt the world would be a better place if everyone were exposed to the basic principles of the recovery movement. It is “now” because I needed someone to do it with and Paul was/is the perfect person.

Paul Williams: I embraced the idea of writing the book as soon as Tracey suggested it. My recovery has been the single greatest gift I’ve ever received. As we began to examine the possibility of creating a parallel program built upon the age-old principles of “owning your problems, cleaning up your messes, and seeking a life of love and service,” I became convinced that there was no task in life more important for me than co-writing the book. To quote directly from the text, “You get to keep the miracle by giving it away.”

Q: You champion the truth that “recovery is not just for addicts,” citing problems like over-spending, food dependencies, and serial bad relationships. You site the dangers of all addictive and destructive behaviors. Can you address that?

Tracey: We often refer to life-limiting behaviors; mind you, people can trundle on forever in the land of life limiting, but how much better would their lives be if they could get a grapple on those “addictions.” The problem with many addictions is they are so engrained in our daily life patterns we often don’t see them as real issues. Or if we do, we find endless excuses to separate ourselves from them.

Paul: The excuses that we use as addicts and alcoholics are evidently endowed with a “one size fits all” element that makes them easily adaptable to an entire laundry list of bad habits. If the symptoms of the behavior are so similar, it makes sense that the treatment should be, too. We’ve created an approach that is equally effective and a little more “bite sized” than chomping down on the “change or die” rethinking an addict must do.

Q: How do your Six Affirmations help people solve such challenges?

Tracey: Awareness and action. With the Six Affirmations, you have a blueprint to follow that points out where you are not living to your full potential. You have guides to lead you to your dysfunctional behavioral patterns, and then we give you the tools you need to set yourself back on course and stay there.

Paul: It’s said, “recovery is a process, not an event.” I like that. It’s a continuum of adjusted behavior that leads to a better way of living. To achieve the same results for the non-alcoholic/addicted population, we needed to provide a measured and focused process. The affirmations are guides to an awakening. The first affirmation reveals the reality that change is in order and we are the ones capable of change. The second offers an insight into the value of faith and the third retires the well-practiced line of defense from change. We own our mistakes, learn from them, and set about repairing the damage we’ve done. The healing properties of honesty are perhaps the magical ointment in the mix. The affirmations are bullet points that keep us on target for the life we deserve — the life we are earning with the ability to live in love, service, gratitude, and trust.

Q: What was the most personally challenging affirmation for you?

Tracey: They are all challenging and rewarding in their own way. And if you use them properly, you apply them on a daily basis, so you come back to them all the time. Oddly, I think the first affirmation — Something Needs To Change and It’s Probably Me — might be the most challenging. It is the first step into the land of the only way I can move forward, deal with this situation, this person, this anything that is an issue, is to change me, be it my behavior or attitude. It is taking full responsibility for your life. The buck has finally stopped and it’s yours to deal with. Once you know, you can no longer pretend that you don’t.

Paul: Tracey and I created the affirmations in order and we’ve worked them all. Perhaps the greatest challenge was in dealing with the concept of an inner ally, a higher power. Religious views are so charged for some people and we were fearful that the very word “God” would turn some away. I think we found a way to share the concept of “Trust” as a remarkable key toward escaping fear-based thinking. Hopefully we took the non-believers to a place where they can see the benefits of “acting as if” as a transitional tool that can eventually morph into a solid and reliable faith.

Q: What surprised/scared you as you set about righting the wrongs you’d done?

Tracey: How many there are: Small and large, mildly catastrophic to merely bumping into someone’s cart at the super market. The great thing about nailing the whole righting-your-wrongs thing is once it becomes a habit, you tend to catch yourself and right your wrongs as you are making them. Then boy, oh, boy, does that lighten your guilt load.

Paul: I’m almost 25 years sober and while my behavior is more considerate than it was during the decades of drug abuse, there is no end to the amends process. Intentionally or unintentionally we cause discomfort, damage, pain, or problems now and then. And “now” is the starting gate to resolution and repair. The reward for reconstructive action is immediate. A sense of well-being and relief so comforting I’m seldom, if ever, frightened by the prospect of setting things right.

Q: What would you like readers to take away from Gratitude & Trust?

Tracey: That they are not alone. Not only is there a universal power that can always be tapped into, but also that there is no one walking around who does not carry guilt, shame, problems, compulsions, and addictions of some sort. They are not all on the same scale, but it is universal. I would also like people to grasp how important it is to take control of their lives. Letting go of the “it’s everyone’s fault but mine” is huge. And in an odd way we are sending out a double-edged message, but one that works. You hand over the reins to your higher power, and in doing that, you remove power from other mortals or indulgences that have taken over the keys to your kingdom. In doing this, people see where they have chosen poorly and how to choose better. They learn how to own their mistakes and in amending those, they free themselves and others from carrying the burden of feeling responsible. And ultimately to be grateful, to wake up each day, knowing we live a day at time and each new day is a chance to start over. And to ring in that day with gratitude for all that one has and trust that all one needs is right there and always will be.

Paul: A healing. A way of living that is in fact easier, more rewarding, and joyous. It’s what I’ve been given, what Tracey has not only co-created but employed to great success on a daily basis. We have activ ely participated in the process we gave voice to and have lived the transformation through love and service into gratitude and trust.