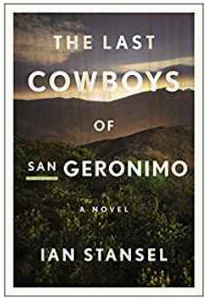 Today's releases include a provocative novel about a washed-up cartoonist in the throes of an existential crisis, and a fun and funny homage to the 1970s. But we begin with The Last Cowboys of San Geronimo, a novel that Senior Editor Jon Foro says answers the question: Where does the Western go from here?

Learn more about today's best books of the month releases below, or browse all of our favorites for July here.

Who Is Rich? by Matthew Klam
Matthew Klam is an immensely talented author: he’s funny, deep, easily readable, and sometimes honest to the point of being startling. He’s written a book—about a white, middle-aged, once successful graphic novelist-turned-steadily-working-illustrator—that touches on family, love, aging, infidelity, unhappiness, life as a working artist, and money. Making his protagonist white and middle-aged was a brave choice, because Rich (the protagonist) does some complaining in this novel (and some cheating), and a lot of readers don’t like to see white, middle-aged men complain or cheat. If that’s you, you can stop reading now. But Rich is also an artist. He’s educated, he’s talented, and he’s frustrated that he still has to struggle to make ends meet. He’s made choices based on passion—passion for his art, for love—which is how it should be. But what happens when the passion begins to ebb? What are you left with then? Matthew Klam strikes me as a writer’s writer, and I think that other authors will love this work; he’s just so honest and talented. But there are other people out there who will be practically relieved to come across such rawness, honesty, and humor as well. Perhaps that’s you.--Chris Schluep

Sting-Ray Afternoons by Steve Rushin
Steve Rushin’s memoir of the Golden Age of candy cigarettes, sugar on your grapefruit, and Nixon on the TV - is an exhaustively thorough, exuberant recollection of growing up in the Me Decade. Exhaustive might have been just exhausting, but Rushin’s takes on artificially colored culture are laced equally with humor and affection, and he captures both the wonder and fear at the tipping point between childhood and adolescence. Sting-Ray Afternoons is the best kind of nostalgia: celebratory yet clear-eyed, wistful but not overly sentimental.--Jon Foro