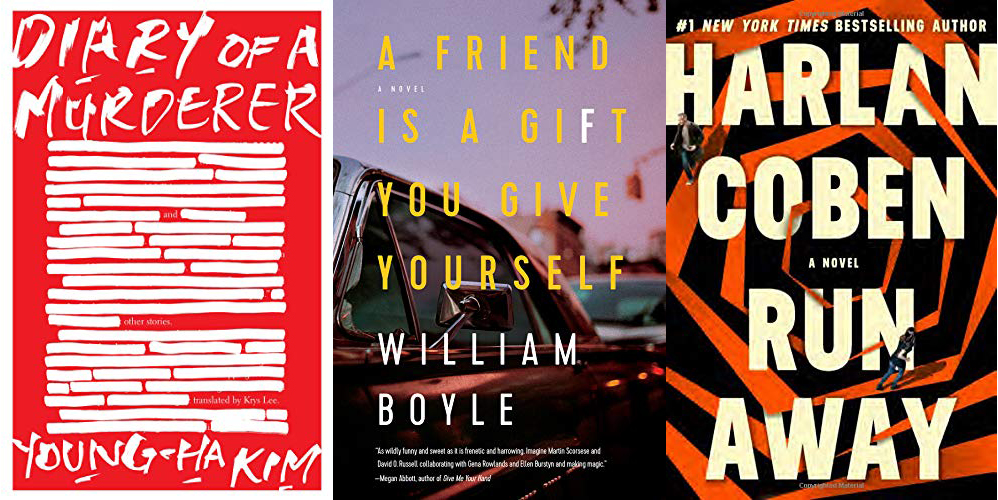 Growing up, there was a TV ad for chocolate that had the tagline “sometimes you need a little, sometimes you need a lot.” Turns out the same is true of suspense. Depending on the current mood, anything from a cozy to a bleak noir fits the bill. Here, going from funny to bleak in three books, are some recent favorites coming out in March/April:

A Friend is a Gift You Give Yourself is a Best Book of the Month in March and it is a gift worth giving yourself (see what I did there?). If, like me, you thought Carmela Soprano was one of the most interesting characters on that show (who knew mobsters had domestic lives?), then this one is worth a read. It revolves around a mob widow who thinks she has murdered a suitor and does what anyone would in similar circumstances: she steals his vintage Impala, and heads off to reconnect with her estranged daughter. On the very day that daughter’s boyfriend, also a mobster, decides to whack his bosses and steal $500K. Soon, all the principals (which now include a retired porn star, a mobster-in-the-making granddaughter, and an angry enforcer with a hammer) are tripping over each other to get out of town. Unfortunately, they’re all headed in the same direction and confrontation is inevitable. Did I mention one of them has a hammer? If you like your noir with a side helping of laughter and female friendship, don’t miss this one.

Run Away by Harlan Coben delivers all of Coben’s hallmarks: a domestic, suburban setting and everyday people who come dangerously close to the shadow world in which reside killers, drug dealers, and people who would steal your American Dream. This time, Simon Green and his wife Ingrid must stand helplessly by as their daughter Paige becomes addicted to drugs and to the man supplying them: her boyfriend Aaron. When she disappears and makes it clear they are not to follow, her desperate father pays no heed and goes after her, a quest which will take him to the seediest areas of New York. Coben is definitely for thrill junkies; as in his other books, the plot is not driven by simply unraveling the mystery, but by all of the obstacles and out-of-left-field game-changers thrown at the hero along the way, including a major plot twist near the end. But now is a good time to start getting caught up on Coben if you haven’t already: a recent Netflix deal means that fourteen of his novels will be adapted for the small screen, including Run Away.

Described by NPR as “one of South Korea’s best and most worldly writers,” Diary of a Murderer: And Other Stories was a breath of fresh air. The star of the show is the titular story, which was released as a novella in the author’s native Korea, selling 400K copies, and later adapted for the big screen where it was #1 at the box office for weeks. It’s structured as the diary entries of a serial killer who’s slipping into dementia, hoping to hold his illness at bay long enough to take out the man his daughter is currently dating. And you can hardly argue with his reason: he suspects the man is a fellow serial killer. Count me among those who don’t care for short stories as a rule, but this literary collection swayed me, thanks to spare, precise writing which counterbalanced provocative plotlines that veered thisclose to gimmicky but rarely stepped over the line.

Get Your Hands Dirty...
Read