How Did Those Famous Children’s Book Writers and Illustrators Get Their Start? 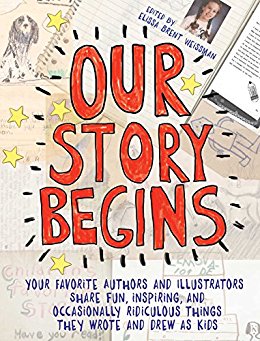 In Our Story Begins, Elissa Brent Weissman collects the early work and memories of 25 of the best living children’s book writers and illustrators.

“What, I wondered, did other children’s authors write when they were their readers’ ages? Illustrators, too. What did they draw?” Those were the questions Elissa Brent Weissman asked herself after discovering a box full of stories she’d written as a kid in her parents’ basement. “I couldn’t be the only one who’d want to know. So I began to ask.”

Weissman, author of such award-winning middle-grade novels as The Short Seller and Nerd Camp, reached out to dozens of artists and writers. She was surprised by how many were willing to write about their early creative work and share examples of it.

That collection became Weissman’s anthology, Our Story Begins: Your Favorite Authors and Illustrators Share fun, inspiring, and Occasionally Ridiculous Things They Wrote and Drew as Kids. It’s published this week by Atheneum, and it‘s a gift to children who are enamored with the work of favorite writers or illustrators, and wonder how they got their start. It may also prove to be a gift to future scholars of children’s books.

From Brian Selznick to RJ Palacio, Kwame Alexander, and Yuyi Morales, there’s enormous variety in the experiences of the 25 contributors included in Our Story Begins. Some had encouraging teachers and parents; some persevered despite early challenges. As Weissman writes in her introduction, “The whole collection is honest and passionate and often over-the-top. It’s raw, in every sense of the word. It reflects the authors and artists these authors and artists admired, and without a doubt, the authors and artists they someday became.”

What may strike you is how “adorably normal” (to use Tim Federle’s words) these budding Caldecott and Newberry winners were in their youths. They were just kids who loved to draw and write, and demonstrated the strength Kathi Appelt’s teacher noted in her: “stick-to-it-ness.”

Elissa Weissman spoke to the Amazon Book Review about the process of creating Our Story Begins.

Amazon Book Review: How did you get started on the project that became this book?

Elissa Brent Weissman: The story began with a box in the basement. I was at my parents’ house and I found this box that was filled with stories I wrote in my childhood.

When I visited schools to talk about my books, I would mention that when I was in elementary school I began writing a novel called The Ryland Revolt. Kids would ask, “Can we read it?”

I started thinking, “I can’t be the only one who has all this stuff saved from when we were kids.”

So what happened next?

I called my agent with the idea, but at first she thought it would be complicated to put together -- which it was.

A little while later I went to a Simon & Schuster dinner and I was sitting next to Candace Fleming on one side and Tim Federle on the other.  Candace told me this awesome story about how when she was a kid, she wrote a story, and she thought it needed a medal on it, so she scraped the Newbery sticker off another book and put it on hers. It was Candace and her illustrator, Eric Rohmann, being on board and their willingness to ask other writers and illustrators that got the ball rolling.

Tim Federle was one of the first people who gave me early work. He had this adorable journal from 6th grade theater camp. You can totally see, looking back, that of course this is the young Tim Federle who went on to write theses hilarious books.

It’s interesting how many people talked about how much they learned, as kids, by copying published work.

Quite a few of the illustrators talk about copying explicitly. Marla Frazee talks about drawing Snoopy over and over. Dan Santat; Brian Selznick; almost all of them talk about copying. I totally copied other writers, too.

In the back of the book we have a list of tips, and in it initially I wrote, “Copy artists and writers you like.” My editor said, “You can’t say that. Teachers place so much emphasis on the importance of not plagiarizing.” So, I wrote: “Get inspired by artists and writers you admire” but I don’t say, “Copy them.”  But really, if you read the essays in the book, writers and illustrators are saying, “I copied this.”

I want to make it clear that I don’t condone plagiarism in any way! But as long as you’re giving credit to the original creator and not trying to pass off someone else’s work as your own, copying is really a great way to learn. When you imitate someone’s writing style, you’re paying close attention to the choices the author made and experimenting with how those choices affect the story. I imagine copying is even more central to a visual artist’s development, since they’re learning to take what they see and recreate it on paper. The end goal is to develop your own style but that comes later.

Did anything you experienced in putting together the book come as a surprise?

I had one negative surprise and one positive surprise. The negative surprise was that I was completely unprepared for how much work it was to put this book together. I spent a lot more time on it than I would have writing a novel. I’ve gained a lot more respect for the administrative component of what editors and agents do. On the positive side: I was very happily surprised by how readily most of the authors and illustrators got back to me and how excited they were to talk about their early work. It was such a pleasure to hear a little about their childhoods.

You found your old work in a shoebox in the basement. What would you say to people who are intent on decluttering, Marie Kondo-style?

It’s tough. It’s true that decluttering feels so good. I would encourage people to save their children’s work. So many writers said they wrote all the time but “My mother didn’t save anything.” Now with computers, we kind of feel we have everything, but we also don’t have everything. Who knows if we’ll be able to retrieve things later? I’m glad I have a print-out of the first 3 chapters of my novel because it is probably on a floppy disk and there’s no hope of getting it off there.

What did you learn from Our Story Begins?

I learned that there’s no right or wrong way to become an author or illustrator. Some of the people in the book – like myself – knew when they were very young that they wanted to see their work in print, and they worked actively towards that goal (one of them, Gordon Korman, even published his first book at 13!) But so many others came to this career later. Lots of people I approached about the book – extremely successful authors! – couldn’t participate because they barely put pen to paper before they were adults.

Further, when I first started this project, I worried that everyone’s childhood work might be so amazing it could be discouraging to child readers who might compare their own writing or art. But while some of the childhood work is certainly impressive, most of it is typical for the age at which it was created, which is, I hope, inspiring to young readers. The one thing that shines through—no matter what the perceived quality – is how much each kid enjoyed creating it. That passion, together with hard work, is what leads to success.

The takeway for me is that it pays to create a lot as a kid. What’s running through all these creative works is this uninhibited passion you have as a kid. You’re not second guessing yourself yet, and so it is over-the-top, and maybe overdone, but is full of personality. I kind of wish I could get back to that. Yes, I’ve honed my craft now, but it’s not nearly as uninhibited or flowing as it used to be. I look at what I wrote and some things are just so silly or melodramatic. There’s something to just letting letting out that emotion and raw talent. It’s putting yourself out there without any embarrassment.

Thank you so much, Elissa. It’s been a pleasure talking to you about Our Story Begins.