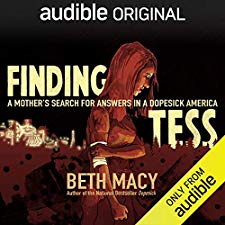 Last year Beth Macy's work of investigative journalism, Dopesick, really blew me away and quickly became a bestseller.  We included it on our Top 20 list of the best books of 2018, and Dopesick has continued to earn widespread recognition. This year we're finally seeing courts handing down significant financial consequences to Big Pharma, who made billions of dollars and flooded the country with OxyContin and other opioid painkillers, leading to an epidemic of addiction. I spoke to Macy over the phone around the time Dopesick released (you can read that conversation and review of the book here) and we stayed in touch.

Earlier this year Macy let me know she had just finished recording an Audible Original called Finding Tess: A Mother's Search for Answers in a Dopesick America, a follow-up of sorts to Dopesick. The Tess in the title is Tess Henry, a young woman who had a privileged childhood in a well-to-do part of Roanoke, Virginia. Tess was on the honor roll in school and both of her parents were medical professionals--her dad was a surgeon, and her mom a hospital nurse. Like so many others, Tess went from taking prescription pills to a life of heroin addiction. Finding Tess is about a vibrant woman who wanted desperately to stay sober and care for her young son, but instead ended up being murdered and found in a Las Vegas dumpster on Christmas Eve. It's Tess's story, but it's also the story of what's been happening in America, to suburban teenagers and soccer moms.

If you're a regular reader of The Amazon Book Review you may already know that I listen to a lot of audio books, and Finding Tess is a great example of why I love them so much.  Macy narrates this audio-documentary and it's enhanced with clips from interviews, courtroom testimony around Purdue Pharma (the manufacturer of OxyContin), news report sound bites, and the ambient noises that accompany the kind of on-the-ground investigation that Macy, Pat, and Audible producer Emily Martinez undertook for this story. It all comes together to create a unique experience that's like listening to an amazing five-hour podcast.

Finding Tess just released a couple weeks ago, but I met up with Macy when she was in town earlier in the fall to talk about it.  She told me that after Dopesick she'd decided she wasn't going to write about this anymore, it was just too dark. But she'd gotten really close to Tess and her mom Pat, and when Pat asked her to help retrace Tess's steps, Macy said yes.  At this point Audible had already reached out about doing something with Macy so she decided this was the piece they would do.

Seira Wilson: Was there a point on this journey where you just thought, I can't do this, it's too dark, it's too icky? 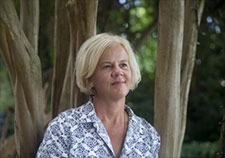 Beth Macy: No...not with this.  This was more positive than how the book [Dopesick] ends, because you have Pat--Tess's mom--becoming an activist now, and also we really learned things about how systems abandoned and failed her.

SW: Do you feel like Tess is representative of the opioid addict we see today, someone who seems so unlikely to end up a heroin addict?

BM: Totally. If this could happen to her, it could truly happen to anybody. And you just learn over and over that...what they need most is access to treatment, especially medication assisted treatment... We learned a lot, which you don't usually have the luxury to do as a journalist.

When we were in Las Vegas, walking into the homeless encampments..it's just...things you never think of.  To think of her [Tess] living in that was both more horrible than we imagined, but she had her own community too. She had a couple of people who were really looking out for her, and that brought her mom a lot of comfort; to meet them, and to thank them.  She [Tess] was close to making it home. I think she would have had this tragedy not befallen her.

When Macy talked about what's different about Finding Tess versus Dopesick, she told me that one thing was the experience of hearing, from a different framework, the conversations she'd recorded, including an interview with a doctor who at one point just sighed. It was a sigh, Macy says, that contained multitudes. And in an audio book you can share that directly with the listener.

SW: This was your first audio original--would you do it again?

BM: I would love to do another one.  It was really interesting.  I loved working with Emily [Macy's Audible producer] and when you're recording on the scene like this, sometimes having another person when you're talking about something really sensitive like this, can dilute the intimacy, but she didn't at all.

Macy has a wonderfully conversational tone to her writing, and as I've now learned, in her audio book style. Her passion for the stories she's telling--how important it is for her to do something about these important subjects, including pulling up the rug so the rest of us can see exactly what's there--is evident in everything she works on.  I can't wait to see what topic she decides to tackle next.