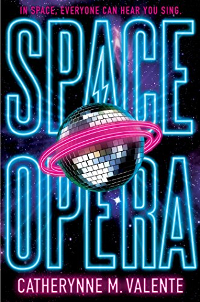 Catherynne M. Valente can write just about anything she sets her mind to. From fantastical middle-grade novels to angry commentary on how female characters are (mis)treated in comic books, Valente’s interests and talents range wide.

This year, her newest novel, Space Opera, explodes like a nuclear glitter-bomb among the usual spaceship-thronged and battle-heavy science fiction stories. In Space Opera, when aliens finally make first contact with Earth, they lay out in no uncertain terms how humanity must prove it is a sentient race: Humanity has to come in somewhere above last place in the Metagalactic Grand Prix, the galaxy’s singing competition. If they don't? Annihilation.

Why a singing competition? You’ll find out. And while you’re laughing at Valente’s outrageous, rat-a-tat writing, you’ll also begin to understand why a drama-filled singing competition might be humanity’s best chance, actually, at surviving.

Adrian Liang: Space Opera is being described as Hitchhiker's Guide to the Galaxy meets Eurovision. How did you come up with this idea of a Metagalactic Grand Prix singing competition that would decide the fate of humanity?

Catherynne M. Valente: It has to be one of the stranger stories of how a book came to be. I love Eurovision. I happened to be visiting London in 2012, and an American friend of mine said, "You can stay with us, but we are going to watch Eurovision." I said, "I don't know what that is, so that's fine." And I watched it and fell in love with it. And every year since that, I've live-Tweeted it. So, two years ago, I was live-Tweeting Eurovision, as I do, and one of my followers said, "Ha ha ha, you should write a science fiction Eurovision." I messaged back, "Ha ha, that would be cool," and not five minutes later I got a DM [direct message] from an editor at Simon and Schuster saying, "We will buy that right now." [Laughs] I had no idea what it would be, other than Eurovision in space. And not something that you can do a real serious book about; Eurovision by its nature is camp and glittery and crazy and nonsensical. And of course when you're writing science-fiction comedy, the ghost of Douglas Adams is always in the room. If you put two or more jokes in space, he appears. [Laughs] So I always knew there would be comparisons to Hitchhikers Guide, which in some sense is kind of freeing. You can't do better than Hitchhiker's Guide. You're never going to top that. So you might as well screw around and try as hard as you can to get the bronze in that particular contest.

While it's just bursting with comedy, there's definitely a serious conversation in Space Opera about our assumptions about who's worthy of respect. I think you frame it as, "Who are people, and who are meat?" Can you tell me more about this idea?

When I sold the idea for the book, the [2016 US presidential] election hadn't happened yet. And when I started writing the book, the election had happened. And suddenly our world is a different place. And it's not that that conversation wasn't a relevant one to have before the election. But it was very hard for me sit down and write a glam rock-opera comedy that didn't have anything serious to say when I writing in 2017.

The thing about glam rock and a lot of the shiniest and most over-the-top genres of rock is that they come about in a pretty dire political landscape, like the 1970s and '80s and the Cold War. A lot of it is very much a reaction to what is going on in the world politically, and that's why it's so over the top and yet kind of dark in a lot of ways—a lot of Bowie's stuff is not nearly as optimistic when you look at the lyrics. Eurovision has this dark political undertone to it as well. It was conceived as a way to reunify Europe after the horrors of World War II, and contemporary politics play out in the contest all the time, from the winner in 2016 being a Ukrainian song about Russian war crimes called "1944" to that one time when judges had to phone in from a shelter because their city was being actively bombed. Eurovision itself is political and always has been—so the book had to be, too.

The whole notion of sentience and its connection to music comes down to the line, "Do you have soul?" And this is this core question, really: Who do you count as being alive? Who do you count as being worthwhile? Whose lives matter? The answer should be that everybody's lives matter—my God, it should be that—but we seem to have a huge problem with that concept, and I don't think it would be any better, really, once we joined other species, if we ever do. I think that that would be at the core of most conflict. The whole notion of the Metagalactic Grand Prix is trying to come up with a nicer way to have that argument than blowing people out of the sky.

I think that I really wanted to find a way to balance comedy and joy and jubilance and to embrace of life in space opera with looking head-on at the place where our world is headed. There are hints all the way through Space Opera that that near-future world is not so great, and it is kind of a direct result of where a lot of countries seem to be headed right now.

And not just America, because the [Space Opera] protagonists are not American. But I didn't feel comfortable looking away from that when I was writing something that is so tied to sentience and to the nature of nations and civilizations and societies.

When Decibel Jones gets anointed by the aliens as the representative of humanity, the British government is like, "Too bad you're not stereotypically British" because he’s not white. Pretty offensive!

That was one of my favorite scenes to write just because it allowed me to do so much in one stroke—to deal quickly with the human reaction to everything that is going on, and how completely inadequate it is to the gravity of the situation. The band is not squeaky-clean schoolboys that any government would be proud to have as their representative. But in many ways they are quintessentially British—they absolutely are. It's a point that Decibel himself makes. But the old guard never wants to consider what is quintessentially any nationality—they only want to consider what it was in their childhood. They would much prefer somebody that they could print on T-shirts and send to their grandmothers. Of course, you could print anybody on a T-shirt! But that is not how marquee-control culture works. 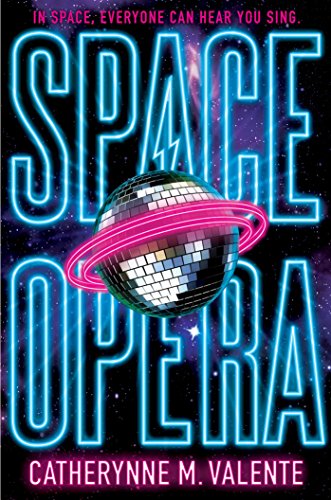 You have a very wide breadth of writing, from the Fairyland books to The Glass Town Game to The Refrigerator Monologues and Space Opera. How do you decide what you're going to write next, or do you have a bunch of different things going on at the same time?

I certainly have projects planned out for the next couple of years, and then every once in a while a Fairyland and a Space Opera comes along, and you just have to... God, if I'm going to say, "Follow the muse," I'm going to have to hang up my hat! [Laughs] Follow the comet, I guess, and do your best to take hold of it while you can. So I definitely have a number of projects that I'm working on right now, and then something will always happen to bring along the idea for the next one. I wrote The Refrigerator Monologues because I saw Spider-Man 2 and I really, really hated it. If I hadn't gone to see Spider-Man 2 that night, I never would have written that book. You can never tell when something is going to come streaming through the window.

What's the thing that's most likely to derail you when you're writing?

I have ADD, so literally anything. [Laughs] I'm a big procrastinator, but I think that my procrastination has purpose. Almost always what I do to put off writing the next chapter ends up getting folded into books somehow. A couple of years ago, I was really blocked with writing one of the Fairyland books, and I ended up playing the video game Mass Effect, which I had never played before. And not only did that turn into a short story, that snowballed into writing a Mass Effect tie-in novel that's coming out this summer. My procrastination is holy, I think. There is always something that comes out of the procrastination…which just may well be justifying procrastinating. But I'm going to stick with it! And real life derails me all the time. And human beings in my world who need attention and cannot be ignored for fictional human beings. Real life is a terrible distraction. [Laughs]

My final question: Do you remember which book made you fall in love with reading?

Absolutely! It was The Neverending Story, which I read when I was very young. You know, there's so many memories that you have, and you run them by your parents, and your parents are like, "That is not how that actually went down." But I talked to my parents, and this actually happened. I read it when I was five—I was a very precocious reader—but I'm pretty sure I picked up The Neverending Story because it had amazing illustrations. And nobody believed that I had read it, because I was five years old! So I had to give a book report on it [to my family]. I loved it so much. There was so much that spoke directly to me and so much there. The Neverending Story is this metafictional thing, where the main character, Bastian, literally goes into the book. It could not be more designed to make a child fall in love with reading.

Note to readers: Eurovision Song Contest 2018 starts on May 8, in case you want to join the happy madness.