Megan E. Abbott is the Edgar Award-winning author of Dare Me, a brilliantly dark and chilling novel about ferocious cheerleaders and, as she puts it, the "witchiness of girls." Amazon editors picked Dare Me as one of our top 10 Best Books of August. Megan stopped by our Seattle campus last week for coffee and a lively chat about books, mass hysteria, and hockey. 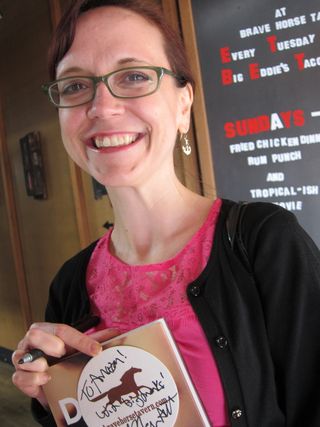 Elevator pitch for your book? The book is about the things we don’t want to think about, about young girls… Cheerleaders are beautiful, they’re charming, they have big smiles, but inside their heart beats darks desires, aggression, competition, yearnings… It’s the thing we don’t want to know about girls.

On your nightstand? Just finishing The Man in the Rockefeller Suit, which is a true crime book about the man who pretended he was a Rockefeller for many years. He was like he was out of a Patricia Highsmith novel. It’s great. Oh, and The Empty Glass. It’s about the death of Marilyn Monroe but it’s an imaginary version of her death. It’s very noirish and Hollywood and very atmospheric and really good.

Favorite books? Raymond Chandler, The Long Goodbye; Faulkner, The Sound and the Fury; and Gatsby, always

Book that made you want to become a writer? That would be James Cain, Double Indemnity. Which may sound odd, but it was the one that felt like it tapped into the secret heart somehow.

Important book you never read? Proust. Never read Remembrance of Things Past. Never read The Brothers Karamazov. I have read some Dostoyevsky but not that. Those would be the most shameful ones. I’m sure there are more that I won’t reveal.

Favorite books or series as a child? Oh, yes. The Betsy Tacy series by Maud Hart Lovelace which is a Midwestern girlhood series that I just loved as a kid. And now I have no idea why. It does not connect to crime fiction at all. But there was something there. And Nancy Drew, of course. And then, oddly, true crime. I read a lot of true crime as a kid -- Hollywood Babylon, Helter Skelter.

Most memorable author moment? It would be the LA Times Festival of Books where I met James Ellroy, who’s a big idol of mine. And we talked about the movie Zodiac for about 20 minutes. My leg was shaking under the table and my heart was beating ‘cause I finally got to meet him.

Talent you’d like to have? After writing this book, it would be athletic ability of any kind, in particular anything involving strength. I would like to be able to hoist a girl in my hand.

Obsessed with? Right now I’m obsessed with mass hysteria, which is one of the subjects of my next book. Sort of, how hysteria can spread among a group. There’s been a few cases of it lately so I’ve been reading a little about hysteria in general and Freud’s (Studies in) Hysteria.

Stressed about? The Olympics. They have fixated me. Writing about athletes and girls, I’ve been really obsessed with the gymnasts in particular and the rituals. It’s making me think there’s a book in there.

Psyched about? I’m pursuing a fascination with hockey. My next book also involves hockey, and I’ve been in contact with a lot of hockey players and I’m going to be doing some really hockey research this fall, so I’m looking forward to that.

Prized possession? I have a swizzle stick from Musso and Frank’s, in Hollywood, which is the bar that all the writers who went to Hollywood used to hang out in, like Faulkner. It was where they would drown their sorrows. It’s above my desk. It reminds me to never go Hollywood.

What do you collect? I do collect bar paraphernalia, hence the swizzle stick. I collect cocktail napkins, bar menus, bar placemats, coasters from old bars.

>See all of Megan Abbott's books