As the host of Watch What Happens Live! Andy Cohen asks his guests some tough questions--usually in the form of a game he calls Plead the Fifth. It's funny and unscripted and you'd be amazed at what big name celebrities will tell Andy on live T.V... As we learned in his first book, The Andy Cohen Diaries: A Deep Look at a Shallow Year, Cohen isn't shy about telling stories from his own life.  And now he's doing it again.

Anderson Cooper is, of course, an anchor on CNN's Anderson Cooper 360 and can often be seen in various locations around the globe reporting on the latest breaking news story. Earlier this year Cooper also published the best-selling memoir,The Rainbow Comes and Goes: A Mother and Son On Life, Love, and Loss.

Cooper and Cohen have been close friends for over twenty years and in the interview below, Cohen took a turn in the hot seat as Cooper asks about Superficial: More Adventures from the Andy Cohen Diaries. 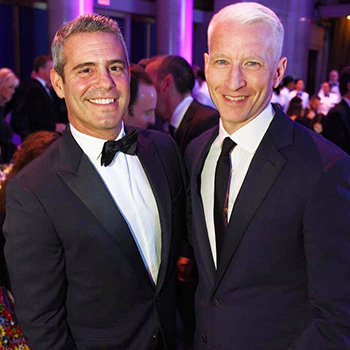 ANDERSON: I hate to ask about the title, because it makes it seem like that is all I’ve read of the book, but did you worry about calling a diary of your life "superficial?"

ANDY:  You make a good point, but this is me owning the word. The very idea of printing my diary has always struck me as completely superficial, and certainly when you read someone’s diary that’s a word that jumps to mind.  Conversely, I hope people will find the book a whole lot more than hollow, so there’s a wink implied.

ANDERSON: I get so annoyed by famous people who have not actually written the books they slap their names on. You have written all your books. What's your process? How do you remember all the weird stuff that happens to you?

ANDY: I was in such a creative groove after turning in my last book (The Andy Cohen Diaries: A Deep Look at a Shallow Year) that I decided to keep writing in the hope that I’d one day do a sequel.  I either wrote at the end of the night or sometimes in the morning. Sometimes they were full entries, or others I just wrote notes about things that happened that day or funny thoughts I’d had. If I had a truly eventful day, I’d take the time to write it all down in great detail. I edited a lot of content out once it was all finished—there was way too much, and I didn’t want to bore anyone. I like to keep the book moving at a fast pace.

ANDERSON: You are of course a pop culture enthusiast and always have been, and there are so many really funny encounters with celebrities in the book, but I was also surprised how much you reveal about your insecurities and your personal life.

ANDY: Well, I was already in a groove and decided to initially write down everything, as I would in an actual diary, and then go back and take out what I was too shy to reveal. But I wound up leaving more in than I imagined, and that was because I wanted to be transparent and real. If I’m doing a sequel to my diary, I better be honest about my feelings, even those involving loneliness, jealousy, and fear.

ANDERSON: You even write about your boyfriend! As you know, I am wild about him; he is super smart, handsome, and such a genuine person. Why has it taken you so long to start dating someone, and can you promise me you are not going to mess this relationship up . . . please?

ANDY: Why it’s taken so long might need to be the subject of an entirely different book! I think the short answer is I was waiting for the right guy to come along, but maybe I didn’t actually want one, or was not available emotionally.  I was really nervous about including him in the book, but this relationship has developed over a year and a half, and so it would’ve been dishonest not to.  And no, I can’t guarantee I won’t screw this one up.

ANDERSON: You enjoy your fame more than anyone I know, and you have so many weird and hilarious celebrity encounters.  How is it you run into famous people so often, and I rarely do?

ANDY: Yes, Anderson, I love getting into restaurants and getting free stuff—that part of fame I definitely enjoy! I cannot believe the volume of famous people I run into in my life, and that’s part of the reason I love this diary format. By the way, I ran into Woody Allen shooting a movie on my block this morning. I can’t believe this is my life!

ANDERSON: Do all the surreal moments that seem to make up your day surprise you?  My personal favorite was when someone asked for one selfie too many and you snapped and tried to kill her by hugging her.

ANDY: I knew you’d like that! I am so glad I was writing while on my last book tour, which was really meta, but I think a fascinating look inside the reality of what that whole madness is about. And so, yeah, when you’re taking your one-thousandth selfie of the day that might be the moment you try to kill the person by lethal hugging!

ANDERSON: As I was reading the book I kept thinking, "Sweetie, you are dancing as fast as you can!" Do you worry it’s all going to explode one day?

ANDY: Sweetie, you should talk! I think you and me both enjoy working, and don’t consider it “work,” so as long as I’m having fun I will continue at this pace.

ANDERSON: I had no idea how many famous people you have unintentionally and hilariously insulted of late: Charlie Rose, his cousin Amber Rose, Tori Spelling. . . . the list goes on and on. Do you have to write many apology emails?

ANDY: Ok, first of all, Amber Rose is NOT Charlie’s cousin. I just want to make sure people know you’re kidding. I usually do drive-by insults, and keep moving until I realize the next day how horrible I am. In the case of Tori Spelling, there were TWO apology emails, as you read.

ANDERSON: Also revealed in this book is just how many people your beloved dog Wacha has bitten. Tom Bergeron, a stylist for EW, and me. Have any of them besides me threatened legal action?

ANDY: You forgot Rick Springfield! No, you’re the only person who has threatened legal action.  In all seriousness, the first book was such a love letter to Wacha, that I think people will be interested and surprised to see that I had some challenges with him in year two.

ANDERSON: I did want to read more about your dream that you were wandering around the afterlife with Lisa Rinna. Is that a recurring dream and how does it make you feel in the morning?

ANDY: That one was only once, and I love that you commented on it. Dreams are really boring, but every so often I threw in a doozy.

ANDERSON: It seems to me that you can write these diaries forever. I laugh out loud reading them, but I got the sense this may be your last one. Is that true?

ANDY: I love the term “everything is copy,” attributed to Nora Ephron, which was my guiding principle as I wrote.  After three straight years of writing, though, I definitely needed a break to just go live my life. I learned a great deal about myself, and it forced me to be introspective in a way that I’m not typically, but “reporting” on my own life became emotionally exhausting. There are days now where I think, “Oh man, that would’ve been a great entry,” but I’m putting the pen down until I clear my head, or think of another book idea.