Buenos Nachos for the Big Game 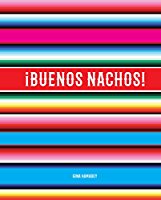 Nothing says football party like a heaping mound of nachos and this Sunday's big game is the perfect opportunity to go all out.  If, like me, you're looking for a way to bring some excitement to this beloved but fairly pedestrian snack,¡Buenos Nachos! is the answer.  Author Gina Hamadey took the ordinary cheese and chip combo and asked well known chefs and foodies around the country for their own signature spin on it.

The result is a magical mash-up of recipes including two of my favorites--J.Kenji Lopez-Alt's Pineapple-Bacon Nachos (yes, I'm that pizza person) and Top Chef season 10 winner Kristen Kish's Nachos in a Bag (don't try to tell me you didn't also think car food when you saw this recipe). The lovely folks at Dovetail Press were kind enough to share the recipes for both below--enjoy! 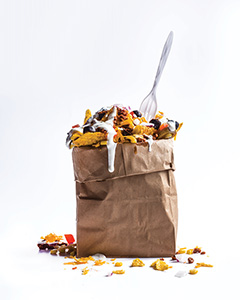 Directions:
Heat a large skillet over medium-high heat. Add the beef and cook, stirring and breaking the meat up with a spoon, until well browned, 8 to 10 minutes. Stir in the spices and tomato paste and cook, stirring, for 1 minute. Add the water, bring to a simmer and cook until the meat has absorbed the liquid, about 5 minutes. Turn off the heat and stir in the lime juice. Set aside.

Divide the chips among 4 brown-paper lunch bags or small chip bags. (You can also serve the nachos in 4 bowls.) Divide the meat, cheese, onion, jalapeño slices, corn, olives, tomato, sour cream and ranch dressing among the bags. Close and shake the bags well to distribute the ingredients. Serve with forks.

Directions
Wash the peppers and place them in a quart Mason jar. In a saucepan, bring the vinegar and salt to a boil, then pour the mixture over the peppers. Seal the jar and let cool to room temperature, then refrigerate until ready to use, for up to 1 month. 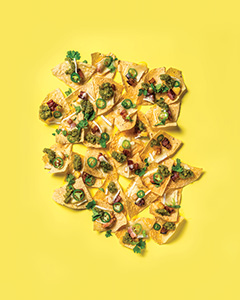 Cook the bacon pieces in a medium nonstick or cast-iron skillet over medium heat, turning frequently, until crisp. Transfer to a paper towel–lined plate and set aside. (Do not wipe out the skillet.) Add the pineapple to the hot bacon grease, toss to coat and cook, stirring occasionally, until tender and lightly browned, about 5 minutes. Season to taste with salt and pepper and transfer to a plate.

In a blender or the jar of an immersion blender, combine the chipotle chiles, adobo sauce and orange juice. Blend into a smooth puree. Season to taste with salt and pepper and set aside.

Place the oven rack in the middle position and preheat the oven to 425°. Spread a single layer of chips on a rimmed baking sheet. Top each chip with some pineapple, a piece or two of bacon and a thin slice of Brie. Bake until the Brie has melted and bubbly, about 2 minutes.

Top each chip with a spoonful of charred salsa verde, a slice of chile and a little cilantro. Drizzle with the chipotle sauce and serve immediately.

Adjust an oven rack to 4 inches below the broiler and preheat the broiler to high. Scatter the tomatillos, onion halves and peppers on a foil-lined rimmed baking sheet. Broil until they’re charred and blackened on top and the tomatillos are completely tender, 6 to 12 minutes. Transfer the vegetables and any accumulated juices to a blender, food processor or the cup of an immersion blender. Add half of the cilantro. Pulse until a coarse puree is formed.

In a medium saucepan, heat the oil over high heat until shimmering. Pour the salsa into the hot oil all at once (it will steam and sputter). Immediately start stirring and cook, stirring, until the salsa is darkened and thick enough to coat the back of the spoon, about 3 minutes. Remove from the heat. Finely chop the remaining cilantro and stir it into the salsa. Season to taste with salt. Let cool, then serve. The salsa can be refrigerated for up to 5 days. 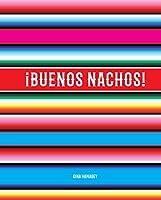 "It Was Possibly the...
Read