"Daisy" vs. "Crawdads" - Which Book Should I Choose? 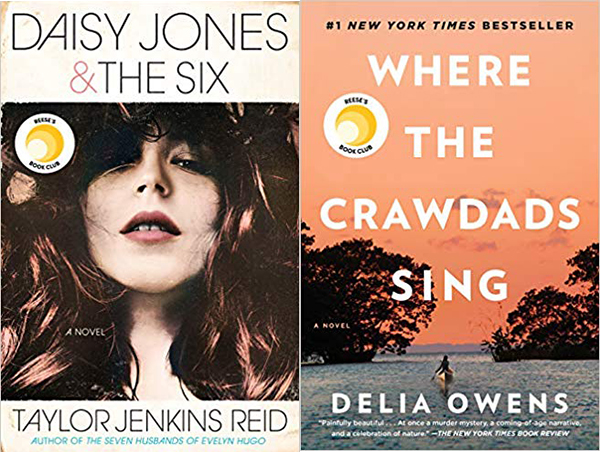 Daisy Jones and the Six and Where the Crawdads Sing are two of the hottest novels on Amazon right now. Both were selected by Reese Witherspoon for her Hello Sunshine book club. Both were selected by the Amazon editors as Best Books of the Month. One has already been a #1 best seller and the other one will likely get there this week or next. But what else do these books have in common? And how are they different?

And which one should you read?

First, the similarities. Both stories are set several decades in the past. The protagonists in both novels are slightly distant, somewhat mysterious young women. They both experience a sexual awakening during the book. And there's a bit of a mystery in each book that, when solved, makes for a satisfying ending.

So they both follow the same blueprint? you ask. No, not really.

You'll see both books at the top of best seller lists for a while, so I hope this information is helpful. What I really want to tell you is that they are both worth your time--you should read them both. I did. So did Reese Witherspoon.

Finally, here are my original reviews of these two books. We read months ahead of publication, which means these are written long before we know for sure how the book will sell:

An Amazon Best Book of August 2018: Although this is Delia Owens’ first novel, she long ago distinguished herself as a gifted writer. In the mid-80s, Owens co-wrote with her husband Cry of the Kalahari, which was a best-selling, nonfictional account of traveling and researching Africa’s Kalahari Desert. One of the joys of that book was the Owens’ description of the natural world, and Where the Crawdads Sing is immersed in the natural world as well. The story is set in the 1950s and revolves around a young woman named Kya Clark, who is from extremely rural North Carolina. Known by others as the Marsh Girl, she lives alone in nature—but the draw of other people, and specifically love, brings her into contact with the greater world. This novel has a mystery at its core, but it can be read on a variety of levels. There is great nature writing; there is coming of age; and there is literature. Crawdads is a story lovingly told—one that takes its time in developing its characters and setting, and in developing the story. You’ll want to relax and take your time as well, and when you’re done you will want to talk about it with another reader. – Chris Schluep, Amazon Book Review

An Amazon Best Book of March 2019: There is something a little intoxicating about Daisy Jones and the Six. This is the story of a young, captivating singer who came of age in the late 60s/early 70s, all told as an oral history. The Six did not hit the big time until Daisy joined the band as their lead singer, but her presence brought along drama, intrigue, and a variety of tensions between herself and Billy Dunne, the leader of The Six. It’s best not to know too much about this book going into it; instead, allow the transcribed interviews from the band members (they weren’t real, but they seem real), and from those who tagged along during this great fictitious band’s run, to unspool the story for you. --Chris Schluep, Amazon Book Review