A Conversation with Michael Connelly 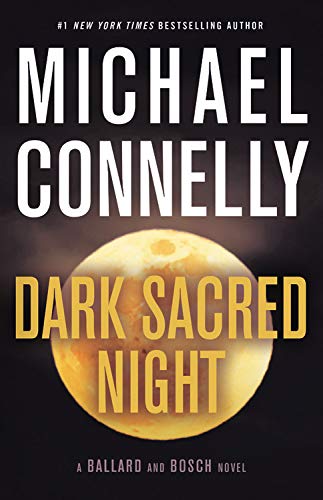 Michael Connelly's latest novel Dark Sacred Night has gotten off to fast start. The book currently sits at #1 on the Amazon Charts Most Sold list for Fiction, and reviews have been overwhelmingly positive. But Connelly is not only a novelist. There's "Bosch," the show (on Amazon) based on his most famous character (I've included some behind-the-scenes images of the latest filming at the bottom of this post). And he's even launching a podcast. I caught up with Michael Connelly to ask him about all of it, as well as what other novels he has coming down the pike. Here's what he had to say:

Chris Schluep: I just learned you are launching a podcast. What is the topic of the podcast, and how long have you been working on it?

Michael Connelly: It’s called Murder Book — after the binder that LAPD homicide detectives put all their reports and photos and documents in during an investigation. It’s a true crime podcast debuting January 14th and in our first season we examine a 1987 murder in Hollywood that took 30 years to bring a killer to justice. There were many twists and turns in the case and that’s why it takes us 10 episodes to tell the story. I keep saying ‘our’ and ‘us’ because I want the story to be carried as much as possible the voices of the detectives who worked it over thirty years and others who played a part in it, including the accused killer. It is really about me getting back to a form of journalism, telling a true story.

Is this a way to introduce nonfiction into your milieu?

I think so. I think journalism is under fire from some segments of the country and that woke something up in me. I guess my dormant journalism genes or something. I suddenly wanted to tell true stories and podcasting is a new media form where you can do it. But I won’t be abandoning Harry Bosch or Mickey Haller or Renee Ballard anytime soon.

How do you find time to write the show, the books, and now do a podcast?

I guess I just work well under deadlines. I sort of jump from one thing to the other but realize I have X amount of time with each. The bottom line is I am a novelist and while I find all of these pursuits very fulfilling, nothing really beats what brought me to the table: going into a room by myself and writing a novel.

You’ve just written a novel featuring both Ballard and Bosch. What was the biggest challenge of placing your newest protagonist in a book with your best-known protagonist?

I have a split narrative in the book so there are times that each character is looking at and assessing, even judging, the other. I know more about Harry so it was easy to write Renee’s view and take on him. But the other way around was tougher. Renee is new and I don’t know everything about her yet. So there was less there for Harry to grasp.

Renee Ballard is based on a one specific person. Could you describe that person and how you know her?

The book is dedicated to her; Detective Mitzi Roberts. My one word description for her is fierce. I have known her for a long time. She was assigned to be a partner to a good friend and advisor to me on the Bosch books. Over the years she became an advisor and she then became a technical advisor on the Bosch show. So it was during this long process that she started telling me about how early in her detective career she worked the late show — the midnight shift — and before long i knew I had to write about her and that job. A woman who works in the dark but is not afraid of the dark or anything in it.

Season 5 of your TV series “Bosch” is currently in production. What can we expect to see?

Through the first four seasons we adapted books that were pretty old, primarily written in the 90s. But this season we jumped forward all the way to Two Kinds of Truth. We did this for two reasons; it’s topical because it deals with the opioid crisis and it involved showing Bosch as we have never seen him. He goes undercover through a big section of the book and the season. And that was fun to do and see. We are almost finished filming and I can tell its going to be a good season.

Does it get harder or easier to write the show as you move from season to season?

Funny, you should ask. This season is the first where I did not write an episode. I had a significant hand in the writing room in determining how we would tell the story and break it into 10 episodes, but at this point the writing room is a cohesive unit and everybody is on the same wavelength and I totally trust each one them. I don’t feel the need to write episodes as long as i have a say in outlining the season and my voice is heard. It is, so I am happy.

Finally, I hear that Bosch, Ballard, and Mickey Haller will be in the next book. Can you tell us anything about the story?

I am only in the early stages of writing. Working title: The Night Fire. It starts with Harry going to a long retired detective's funeral and finding out from his widow that when he retired 20 years early he took with him the murder book from a case that hooked him deeply but he never solved. The widow turns the book over to Bosch and he brings it to Ballard. It goes from there with them working the case, and Mickey Haller intersects with them as well. So far its been fun!

Here are photos from the set: 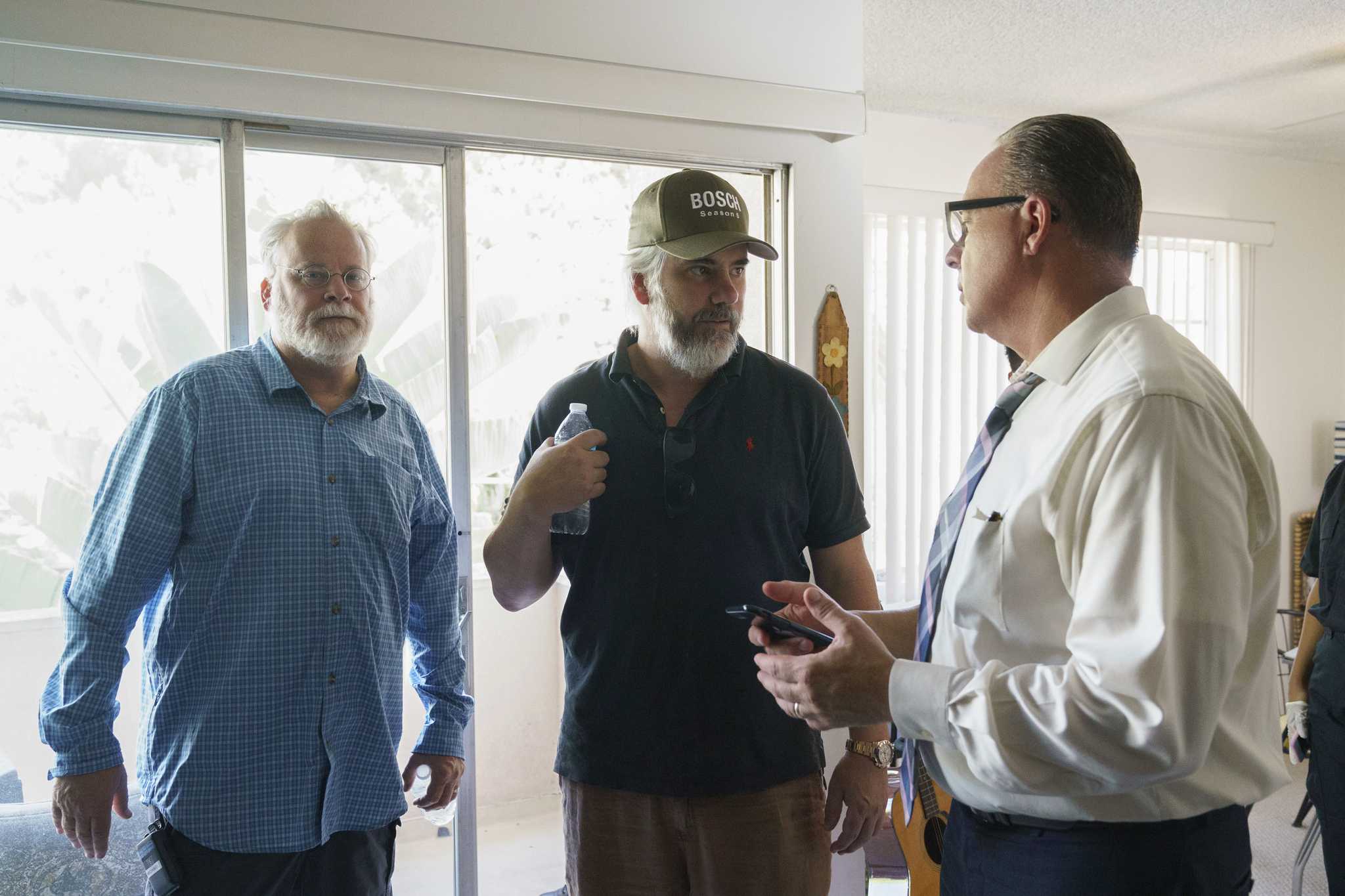 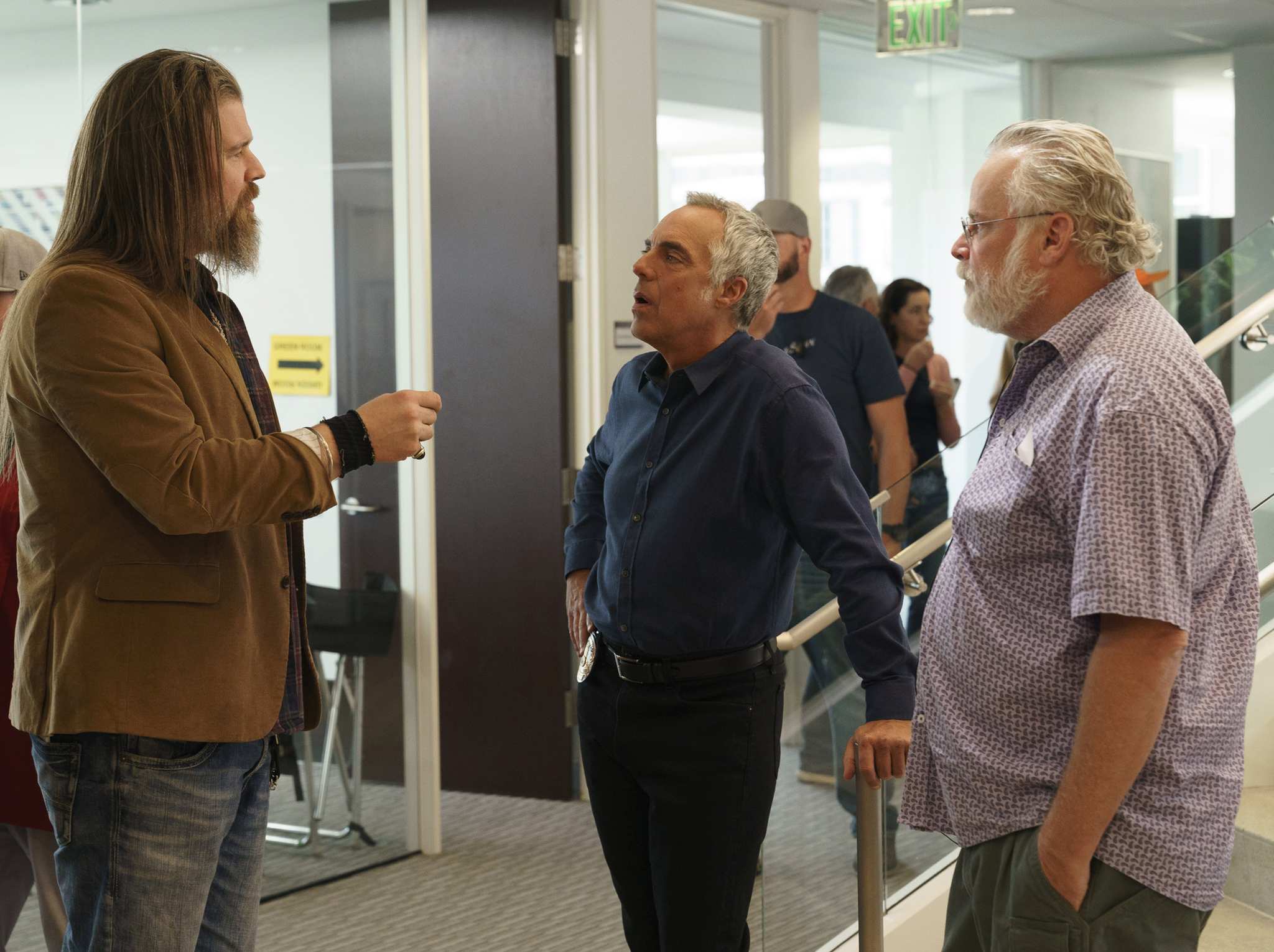 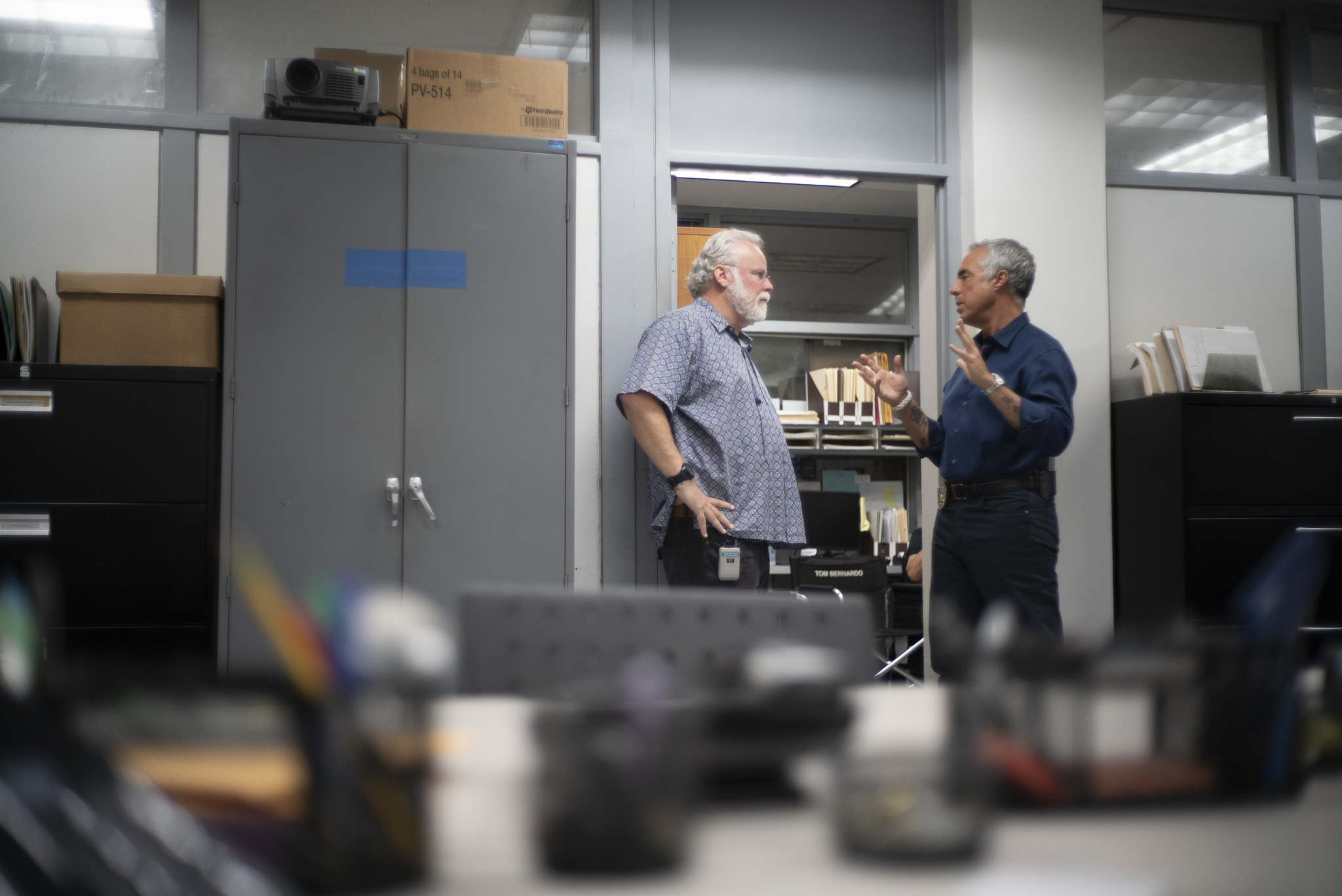 
Sign up for the Amazon Book Review: Best books of the month * author interviews * the reading life * and more