"A Woman's Place" by Sujata Massey 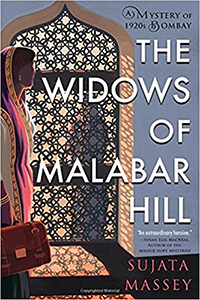 One of our Best Books of January was Sujata Massey's mystery The Widows of Malabar Hill, which introduces one of the more interesting heroines of recent times, Perveen Mistry.

Here's what Amazon's Vannessa Cronin had to say about it:

"Set in 1920s Bombay, The Widows of a Malabar Hill introduces Perveen Mistry, Bombay’s first female solicitor, who works for her father’s law firm, handling contracts and estate work. When one of her father’s Muslim clients dies and the trustee of the estate submits paperwork, signed by his three widows, donating the bulk of their inheritance to charity, Perveen’s suspicions are aroused. The widows live in purdah, totally cut off from the outside world, and as she delves deeper into the secrets and betrayals in the house on Malabar Hill, what started as a routine inquiry quickly escalates to murder. Perveen has painful experience of the ways in which women’s voices can be silenced, and driven by personal tragedy to protect the rights of such women, even murder can’t deter her. Massey deftly evokes the sights, the sounds, and the heat of Bombay as her clever and determined heroine, aided by a large supporting cast of sharply-drawn characters, sidesteps both custom and danger to deliver justice."

We asked the author to write a little about her book and her heroine.

A couple of years ago, I took a walk through a narrow old lane in the heart of Mumbai’s Fort neighborhood. I puttered along, observing the faded marquees of old shops, newspapers and law offices. I’d journeyed from my home in Baltimore, Maryland, to arrive at a small street that I only knew from an antique map. It felt like a victory to find Bruce Street really could stand as part of my historical novel, The Widows of Malabar Hill.

In the post-World War I era I was writing about, Bruce Street was packed with law offices. Fortunately, most of the old buildings on Bruce were still standing, and the imposing, Gothic-style Bombay High Court is still nearby. Throngs of people involved in law streamed toward the court, and among them I spotted a number of women lawyers and clerks dressed in the white shirts and black coats that are mandatory for recognition before a judge.

I watched these legal professionals chat and go about their business, and I felt the warmth of a secret tie between us. The tie was my book, which centers on a young woman named Perveen Mistry, who is the city’s first woman solicitor and works with her father on a mix of contracts and crime cases at 3 Bruce Street.

My fictional Perveen was inspired by India’s first two women lawyers: Cornelia Sorabji, who began working in the 1890s as the first female lawyer in the British Empire, and Mithan Tata Lam, the first woman admitted to the Bombay Bar in 1923. Both were tremendous groundbreakers, because people were reluctant to have their legal rights protected by women. Perveen Mistry only has a job because her father has allowed her to work inside his practice, and her caseload is almost exclusively contracts and wills. In other words: nothing public-facing.

I understood the lady lawyers’ struggles after reading their memoirs and letters. But not until I stood on Bruce Street did I understand the weight of the old hand of colonialism. India’s British government made Christians subject to British common law, but it wrote different legal codes for Hindus and Sikhs and Buddhists, Sunni and Shia Muslims, and Parsis, as Indian-born Zoroastrians are known. The legal codes—which were signed off by a few powerful Indian men in the different religious communities—dealt with family matters. They specified at what age boys and girls could be married, whether divorce was allowable, and allowable property and asset inheritances.

It is inheritance due to wives that starts off The Widows of Malabar Hill. Perveen is overseeing the estate settlement of a Sunni Muslim textile mill owner. Omar Farid has died from cancer and left behind three wives, two daughters and a baby son living in a stately stucco bungalow in Bombay’s elegant Malabar Hill. The wives have spent all their lives living in purdah, secluded from contact with men other than their husband. Because the widows cannot be seen by shop owners and bankers, they can’t take care of themselves without the assistance of a household agent appointed by their late husband as the household’s spokesperson and guardian.

Perveen is suspicious when the household agent sends a letter to the law firm stating the widows wish to donate their inheritances to a charitable foundation. She insists on meeting with the household agent, and then the women, to apprise them of their rights. Perveen’s legal visitations lead to a shocking act of violence on the other side of the house’s golden purdah screen. Suddenly, she’s embroiled in a criminal law crisis and begins a delicate balancing act trying to protect the Farid family.

The killing in the Farid bungalow stirs up Perveen’s own troubled past—subjugation she’s suffered under cultural traditions relating to menstrual seclusion, and also in terms of domestic violence and archaic family law.

As I’m writing this, I’m on tour. When I describe some of the old laws women lived under in the British Empire, people are horrified. But then we talk some more. A women lawyer recalls the Baltimore judge who refused twenty years ago to allow her to approach the bench unless she wore a skirt. I know battered women whose husbands called the police and got the women arrested instead. And in multiple states, laws stand that allow attackers to sue for custody of children conceived during a rape.

At one point in the novel, Perveen complains to her father about the unfairness of the existing family laws. He retorts that the only way to change the law is for a woman to take power and push for it. And as India moved forward, women lawyers did make that happen. With the involvement of Mithan Tata Lam, the Parsi Marriage and Divorce Act was rewritten in 1936 to expand the grounds for divorce. The Act was amended again in 1988 to finally eliminate the provisions that had been left in defining acceptable marital violence.

As I continue writing about my historic woman lawyer, I’ve seen women’s activism become amplified around the world. Last January 21, I walked the streets of Washington DC in a throng of more than 500,000 women calling out to the world they would not stay silent in the face of growing conservatism of the U.S. government. Women and men joined the march in all states and an estimated 81 countries, with an estimated 10 million participants. Some thought the march was just a show, but in the months after the Women’s March, women began speaking out the names of men who’d abused them, and action has been taken in many fields to become less professionally tolerant of abusers. I suspect much more action lies ahead.

I made my research trip to old Bombay two years before the Women’s March. At the time, I had no inkling that the feminism would resurge powerfully in my own country. But I suspect that Perveen Mistry was looking down from her open office window on Bruce Street, and she was glad for it.