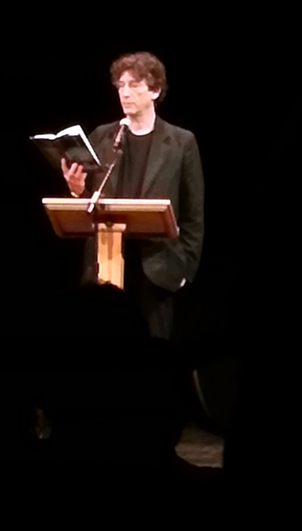 Neil Gaiman is gripping both of my hands in his, squeezing them. "We're at No. 5!" he exclaims. I don't correct him, but I already know by this time that he's advanced to No. 4, behind Dan Brown's The Inferno, Stephen King's Joyland and the Song of Ice and Fire series by George R.R. Martin. For now--in the fevered rush of his repeatedly scrawling his name and doodling a character that seems to fall somewhere between a Pac-Man ghost and what looks disturbingly like a Klan member--No. 5 will do.

Much like the seven-year-old narrator of his new novel might be at the prospect of a new comic book, Gaiman's giddy about his Amazon Best Sellers ranking for said new novel, The Ocean at the End of the Lane. His reaction to metrics is more related to abating nervousness than feeding ego. 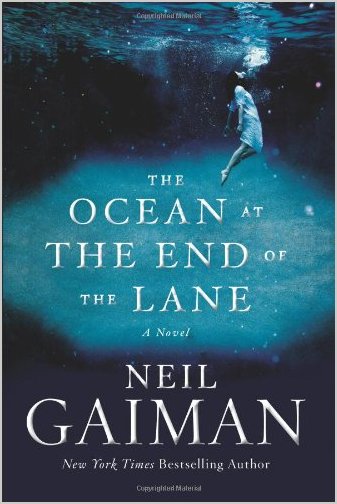 It's release day, both here and in the U.K., and he's just spent the last couple of hours onstage at the Brooklyn Academy of Music (BAM), reading from a chapter or two and answering questions from those in attendance. "This book is so me, it feels like I'm walking naked down the street," he said. To like this book is, in essence, to accept the man himself. The positive reaction, for the first time in a very long time, is extremely personal.

That sentiment has permeated every aspect of the event--culminating with an autographing session, and beginning when the lights went down two hours ago, he took the stage, and started using heartfelt phrases like "ridiculously grateful." The whole thing went a little something like this...

He briefly explains the book's origin: a short story for his wife, singer Amanda Palmer, which soon grew to a novelette, then a novella, and ultimately--upon finally transferring his handwritten story to typewritten pages, revealed itself to be a full-fledged novel. Then he cracks open the book and reads, in that soft, precise, utterly British voice of his, Chapter 2--a primarily innocent part of the story in which only the repeated pulsing of the italicized word "anatomy" warrants a menacing, almost Snape-like delivery.

Closing the book to (of course) enthusiastic applause, he visibly exhales, runs a hand through his mop top, and waits for the clapping to die down. While Palmer performs an interlude--a new song sung nearly a cappella with only her ukulele to keep her company--Gaiman collects himself, and the stack of index cards with audience questions, offstage. The stack he hands to Palmer; he returns to his podium.

Was the book inspired by his own childhood memories? "Yes." He stops there; question answered. Palmer ostentatiously flings the card behind her. The crowd laughs and Gaiman chooses to elaborate, emphasizing that it's not autobiographical, that it's "filled with lies," though he concedes that the "landscape is completely true."

Has he ever considered writing a proper autobiography? He "toyed with" the idea of writing the story of his family in the form of a travel tale to a town in Patagonia, Argentina called Gaiman, but blew it by taking a day trip there. He tells the story of that visit, nudged by Palmer, who is shuffling through the index cards and subtly whittling down the stack, dropping every few cards to the floor.

What was the best thing that happened to him this week and what was the worst? He describes how "scary" "joyful" "wonderful" it's been to see the reviews come out. "Usually you have to have photos of the reviewers in compromising positions... with farm animals," he says, "to get these kind of reviews." And the worst part--realizing that everything up to now has been "an overture" to the next few months of touring.

He's asked his thoughts on the semicolon. He answers in complete earnest. He's genuine. He's humble. He's hilarious. He remembers not being like other kids, having a "crippling imagination." He proposes that beauty is the key to the physical book's survival in an e-book era. He deftly dodges answering how he handles being let down by people or places: "I just want to go on record and say that places have not let me down. 'London, how could you? New York, you fickle bitch!'" 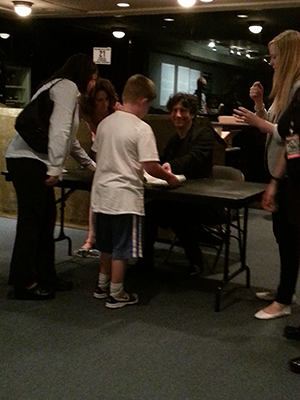 He opens the book again and begins (but does not finish) Chapter 3. That will be up to each to do in his or her own time. Everyone who bought a ticket has received the book, and now he's going to spend who knows how much longer signing them for who knows how many people. No fan will be turned away is the understanding. The line, as I exit, spans the building's lobby, curves out the door, then down the street, then around one corner, then down the entire block. If I'm to believe that the poor woman who drew the short straw to hold the "End of the Line" sign which first directed me to my spot about 20 fans back a half hour ago is still out there, the line surely snakes around the next corner, as well, at least.

This evening's event (subtitled "A Night at the Opera") has kicked off what he has dubbed "The Last U.S. Signing Tour," a point he didn't make on stage, but which he touched upon as he described his travel approach this time. After his last adult book came out (Anansi Boys in 2005), he would do his bit on stage, spend hours autographing for a thousand or more fans, then go back to the hotel. The man who brought him his 3 a.m. hot chocolate, he said, would be the same man who knocked on his door at 6 a.m. with tea to tell him the car to the airport had arrived.

He sounds tired just describing it. So, taking a cue from his wife, he's rented a tour bus. He seems pleased with the solution, and it's quite likely that we all made a simultaneous wish in that moment that this might mean he's found new energy to continue the tours in the future. We're all there to see Neil Gaiman, after all, so naturally we believe that a wish like this--particularly one made en masse--can come true.