This Emblem Leads You to Adventure! 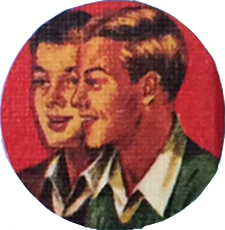 As a child, I was a Cheerios aficionado. And it was on the back of a cereal box, in 1974, where I saw a mail-order offer for volume 53 of "Franklin W. Dixon's" series of adventure-mysteries starring Frank and Joe Hardy, a pair of precocious, crime-solving brothers both wise and brave beyond their teenage years. The jacket was irresistible to my seven-year-old self: an emerald dragon wrapping itself around the shoulders of the handsome, intrepid brothers, who are standing so close - maybe uncomfortably close - that they cast impossible shadows on each other's faces. A pair of chessmen - a standard white knight and an exotic black piece, a bishop or a king - mirroring the contrasting hair colors of the young detectives and hinting at a world deep in secrets and danger. A hot air balloon. The title sealed the deal: The Clue of the Hissing Serpent. With a little help from my mom, I ordered the book.

As my first chapter book, Clue was a difficult read. But I stuck with it, and it turns out the back of the book was right: I had stepped onto the path to adventure! From then on, every chance I had to duck into a bookstore, I'd head for the back, looking for the distinctive, three-foot-long run of spines, a seam of blue gold in the stacks. Going back to volume one, The Tower Treasure, I collected the books one or two at a time and tore through their 125 to 175 pages, often pushing the limits of reasonable bedtimes and school bus schedules. It took a few years, but eventually I possessed all 58 volumes (all that had been published to that point), plus the surprisingly frank (sorry) Hardy Boys Detective Handbook.

It was just as well that I had run out of these juvenile whodunits, as I was pushing the limits of the upper age-range and could benefit from more challenging fare (I can't say whether or not 'Salems Lot was an appropriate next step, but that's where the path led). Through my early to mid-teenage years, I kept them all as a badge of honor, the trophy awarded for major achievement. But eventually - predictably, unfortunately - they began to lose appeal; treasures of childhood eventually become (seemingly) childish embarrassments. Later, in my nomadic early twenties, moving them became a hassle, and I purged all but one: Volume 53.

I wish I had them all back. I'm not usually a sentimentalist when it comes to books - I have plenty, and I don't need to keep a copy of everything I read. (I did recently replace my copy of the Detective Handbook with and identical volume found at a garage sale - I'm not a monster.) But recently I was staring at the bookcase where The Clue of the Hissing Serpent is shelved, and I thought it would be interesting to see what so captivated seven-year-old me.

Here's what I learned.

Lessons from The Hardy Boys #53: The Clue of the Hissing Serpent

There Is a Lot Going on Here

Within the first 15 pages:

Things continue to happen apace, including more conkings (see below), a near plane crash, a scheme involving five-foot logs placed in coffins as decoys, and several more catastrophes involving dim Chet. But all of these events are relevant to the main mystery: the theft of the Ruby King, a one-of-a-kind, life-size chess piece. (To confuse matters, there is also a character named Ruby King, described as "buxom.")

I understand now why I had trouble with this in the second grade, because I can barely keep up now.

They Get the Job Done, But Prudently and Within Reasonable Limits

"The Hardys crept along for a while until they could pick up speed. Joe passed dozens of cars, but eased off on the gas when the needle exceeded the speed limit. 'If we get a ticket, we'll never get there on time,' he said."

In the Hardy Boys Universe, Getting Conked Is a Real Hazard

Page 66: "Mine, too," Frank said. "Those rats. Probably the ones who conked Radley."

Page 110: "Were those the three guys who conked you?" Frank asked, pointing to the car.

Holy Crow! They Sure Do Exclaim, "Holy Crow!" a Lot.

There Are Some, Um, Interesting Turns of Phrase

A few character descriptions really bump the turntable. Chet is described early on as a "chunky, freckle-faced youth," the first of several fat-shamings. Smith is "short and slender, with long pointed fingers. He had a slightly Mongolian look." "Paul Goo, whose eyes were shuttered in deep fleshy folds." "Coolie hats." A character named Choy Bok, hopefully not a play on cabbage. Another called Kim-Kim, a diminutive-but-fierce ally who speaks in Jar-Jar-esque pidgin.

I realize that 1974 was a different era, but holy crow. It was also not very long ago. I wonder if newer editions have been revised.

Aside from All the Conking, the Hardy Boys Live in a Dangerous World

Going into a stakeout, the boys are warned, "The place is unsafe.... We flush out vagrants now and again, mostly junkies." Frank and Joe are attacked by "dirty bums" and Chet is buried to his neck in rubble. Late in the book, they are attacked by farmers wielding sickles.

This is a good time to talk about The Hardy Boys Detective Handbook, written by "Franklin W. Dixon in consultation with Special Agent William F. Flynn, Federal Bureau of Investigation, Retired." This book discusses actual investigative techniques within the context of real-world police files and Hardy Boys cases, including surveillance, fingerprinting, capturing fugitives, and drugs. (In fact, this book is where, as a 10-year-old, I learned that "horse" is slang for heroin, and "fanning a sucker" means "locating a victim.")

The foreword clearly states its purpose as a recruitment tool for G-Men: "It is our sincere hope that many readers of this handbook will someday join the ranks of our country's brave and dedicated law-enforcement officers who fight the never-ending war against crime." One can imagine a young James Comey.... One can also imagine the depths of trouble a pre-teen with a vivid imagination could find him- or herself in while applying the lessons of this book.

The Hardy Boys Have a Friend Named Biff Hooper

At one point, he's mistakenly called "Boff." I've been thinking about this off-and-on for two days. They also meet an associate of Chet's, Ken "Fearless" Flippen.

Let Me Fix You Some Sandwiches

Page 64: Chet, meanwhile, had wandered into the house looking for food. Aunt Gertrude, who had anticipated their need for sustenance, had ham sandwiches ready for them ..."Wait for me!" Chet grabbed a fistful of sandwiches and wriggled into the back seat.

Page 87: Joe and Tony reached the Hardy home minutes before Frank and Biff pulled into the driveway. Excited conversation ensued for the next hour over sandwiches....

Page 106: After lunch of roast-beef sandwiches, topped off with wedges of Aunt Gertrude's apple pie, the boys drove off to look for the shack which Joe and Tony had discovered in their horrendous aerial search.

Page 128: Frank and Joe sat in gloomy silence until Joe suggested they have some lunch. As they were eating their sandwiches, Chet walked in the back door.

Page 148: When Gallic and Lola noticed the boys, they came over, took them by the hand, and led them to a long table. On it stood a punch bowl and a variety of sandwiches.

Frank and Joe Are Players, But What is the Game?

Page 68: Half an hour later Mr. and Mrs. Morton arrived with Lola, Chet's sister. She was a pretty dark-haired girl who often dated Joe.

Page 140: After a brief knock, Joe opened the door and Gallic Shaw and Lola Morton breezed in. Frank grinned at Gallic, a pretty blond girl with brown eyes, whom he often dated.

So What Did I Learn?

It's a fair bet that I hadn't opened this The Clue of the Missing Serpent in more than four decades. In fact, in the pages just past the endpapers - decorated with naive sketches from the Hardy Boys' many escapades - I found two wiry, dark hairs, both about an inch-and-a-half long, tucked into the spine. Alarming, to be sure, until I realize that they must belong to my childhood dog, Tuffy, a black-and-white Peekapoo (an unadvisable Pekingese-Poodle cross) with an underbite and an unfortunate allergy to fleas, which eventually drove him insane. Tuffy, not yet insane, arrived when I was seven, around the time I was starting my Hardy Boys adventure. Just pulling this book off of the shelf brought a thousand-pound sentimentality-hammer down upon my head. Re-reading it expanded the experience by multitudes.

You don't have to keep all the books, but be sure to keep the right ones. 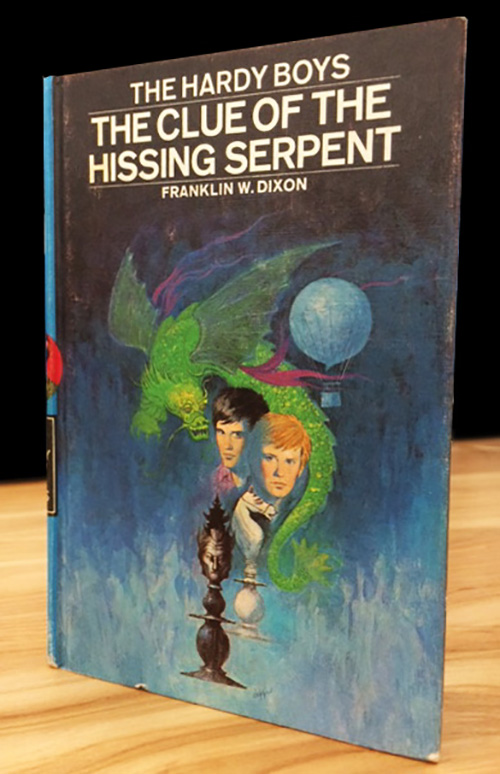