The Neurological and the Divine: An Interview with Oliver Sacks 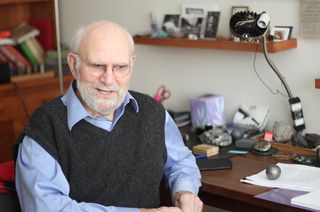 Physician and professor Oliver Sacks is the author of The Man Who Mistook His Wife for a Hat, Awakenings, and Musicophilia, among many other works. A few months ago, Dr. Sacks—whose moving, fascinating collections of case studies nearly convinced this diehard fiction reader to major in neuroscience instead of literature—graciously welcomed me into his New York City study to discuss his latest book. Hallucinations, fresh off the presses today, is one of our Best Books of the Month selections for November.

Mia Lipman: In Hallucinations, you mention that your childhood migraines are one of the reasons you became a neurologist. How did they help shape your path?

Dr. Sacks: My experiences go back to my first memories of when I was three or four, suddenly seeing a brilliant zigzag which seemed to be vibrating, then enlarged and covered everything to one side. This has happened innumerable times since, but that first time was very terrifying…I know I was in the garden, and part of the garden wall seemed to disappear, and I asked my mother about it. She too had classical migraines, so she explained what it was about and said that it was benign and it would only last a few minutes, and I'd be none the worse. So though I'm not in love with the attacks, it's nice to know that one can live with this quite well.

So that early experience made you curious about why this was happening to you?

Indeed, and there were other experiences. Sometimes it was just color, perhaps in one half of the visual field, or things would be frozen and I couldn't see any movement. So I think this gave me a very early feeling that it's only the privilege of a normal brain which allows us to see the way we do—and that what seems to be a simple vision in fact must have dozens of different components, and any one of these can go down. So it was a learning experience for me as well. 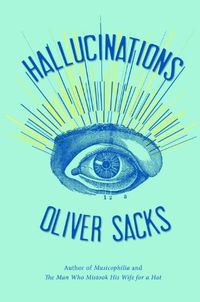 Speaking of learning experiences, you talk in the book about a period in your 30s when you did a lot of hallucinogenic drugs—

Ah, I thought that would come up. [Laughing.]

Of course, it's the best part! I especially liked your description of the results as "a mix of the neurological and the divine." What did this self-experimentation teach you about your field, as well as personally?

I can't conceal that my motives were sort of mixed, but these were learning experiences as well as recreational ones, and occasionally terrifying ones. The gain, I think, [is that] it's a way of revealing various capacities and incapacities in the brain, including, perhaps, mystical ones…I quote William James, who, after taking nitrous oxide, said that it showed him there were many forms of consciousness other than rational consciousness, and that these seem to be uncovered one by one. And that's quite an experience. I do not recommend it to anybody, and I hope my writing about these things is not seen as a recommendation. I think I'm very lucky to have survived them, which several of my friends and contemporaries didn't.

The cornerstone condition in Hallucinations is Charles Bonnet syndrome, or CBS. Will you please describe CBS and tell us why you chose to center the book on this condition?

I see lots of elderly people who are hearing impaired or visually impaired but quite articulate and intact intellectually. In general, the hearing impaired get musical hallucinations and, even more commonly, the visually impaired can get visual hallucinations of a complex and dramatic character. These were described in the middle of the 18th century by a Swiss naturalist, Charles Bonnet, and we speak now of Charles Bonnet syndrome. It used to be regarded—when I say "used to," I mean until 1990—as very rare, with only a few dozen cases reported. But it's now obvious that it affects between 10 and 20 percent of people with significant visual impairment. But like all hallucinatory experiences, people are frightened to mention it, and one may only get an account of it when there's a nice, trusting relationship between the patient and the doctor.

[CBS] can be very frightening, as it was for the old lady Rosalie whom I describe. But she was hugely relieved when I could say, "You're not mad, you're not demented, you're not on anything, and this is a normal reaction of your brain to being blind." And I told her about Charles Bonnet, and she was very tickled by it.

She liked to have it named.

Yes, yes—she said, "Tell the nurses I have Charles Bonnet syndrome." I speak about a very different sort of hallucinatory experience she had when she thought she was dying, and I didn't know whether I should add that, in fact, she survived and is now enjoying her 99th year.

That's wonderful to know. I'd also like to explore the section on auditory hallucinations, particularly the cases where people hear voices when they're in serious danger. Are these recognized in retrospect as inner commands, or do some patients continue to believe it was an outside voice?

Well, it may depend on the person somewhat. Freud, no less, described this himself on two occasions when he was in mortal peril: hearing a voice, he said, as "a shout in the ear," saying "this is the end"—and at the same time seeing the words printed in midair. On the other hand, when he heard the voice of his fiancée occasionally when he was a lonely young man in Paris, he wondered if there was something, I want to say, paranormal. He wondered if there was some telepathy, and he would always note down the exact time and try and check. In fact, nothing ever happened.

That must have been very disappointing.

He was perhaps disappointed and relieved. I mention in a different context, in a chapter on epilepsy, a woman who heard a voice—God's voice—telling her to run for Congress. [Laughs.]

And she followed it?

She followed it. And she advertised it, and people thought, "Well, you know, if God suggested it…"

I wonder how she did in the polls.

She did very well. It had always been a strongly Democratic district, but she almost tipped it the other way.

In Hallucinations and other works, you often use anecdotes about patients to illustrate a condition. But we don't necessarily know what treatments they received or if there was any resolution. That's an unusual tactic for a storyteller, which I consider you to be. Is the protagonist the condition itself, and the patients more the supporting cast?

It's always a relationship between the person and the condition, and one must be as alert to one as to the other. [William] Osler, who was a great physician, used to say, "Ask not what disease the person has, but what person the disease has." Obviously, one is always asking both.

For me, and I think in general for medicine, diagnosis—and perhaps treatment—is not necessarily the end of the story. And certainly with complex and often chronic conditions, the person may have to live with it one way or another. The challenge is more to find ways of living and staying oneself and making the best of things…with something acute, like migraines, my little anecdotes very often include a description of reactions to drugs, both their power and sometimes their limitations.

I enjoyed the connections you made between hallucinations and literature: seizures in Dostoyevsky, doppelgängers in Poe. Why do these conditions lend themselves so well to fiction? And is the relationship symbiotic—do you often turn to novels when you're trying to figure out the mind?

Yes. Since you mention novels, there's a wonderful description of a hallucination in Great Expectations. I'd read that when I was about 15, and only when I was writing [Hallucinations] did I suddenly remember that amazing scene when Pip sees Miss Havisham hanging. Dickens is full of wonderful clinical descriptions: the fat boy in The Pickwick Papers who's always falling asleep—I mean, we now call that Pickwick syndrome. And a novelist has to be a good clinical observer, as well as everything else. But I would also say that a physician should have something of a novelist in him, although it will be a nonfiction novel.

What did you read while you were writing Hallucinations? Did you find yourself revisiting the classics that you cite?

I'm a strong believer in revisiting—and I had to revisit Great Expectations. I thought, "Am I right? Am I remembering that right?" I think it was Mark Twain who said he was very good at remembering things which had never happened.

One of my favorite stories in the book is about Gertie C., an elderly woman who hallucinates a gentleman caller and cherishes his company. Will you share another story or two of patients whose hallucinations have had a positive impact on their lives?

In the Charles Bonnet section, I speak of a poet who had had a lot of poetry published in her 20s and 30s, then moved toward an academic life and was no longer visited by the poetic voice—until, in her 70s, she lost her vision to macular degeneration and started having hallucinations. She kept a very close journal of this using a tape recorder and used many of the images; they were, I think, instrumental in getting her going…her first book of poetry was published when she was 83, and then subsequent books. So Charles Bonnet hallucinations reopened a door for her.

They awakened an artistic self.

Whether she would have preferred that it didn't happen is a complex thing. I quote another man in that chapter who imagines his eyes saying, "We know blindness is no fun, therefore we've arranged this small syndrome for your benefit—and it's not much, but we hope you enjoy it." [Laughs.] In my previous book The Mind's Eye, I wrote quite a lot about a tumor I had in the eye, and losing sight and various problems.

It sounded terrifying in your description.

Although I was glad it gave me some clinical material, so to speak—and that I was able to speak both as patient and observer—I sort of wish it hadn't happened. With so many of my patients and so many patients generally, perhaps all of us, we lament various things. But perhaps if we can speak about them and get something from the experience…it's different if one is born with something. If deaf people are born deaf, they don't long to hear.

So it's a mixed blessing, in a way.

I would say beside the curse, there are usually some blessings as well.