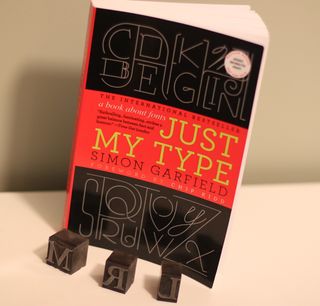 When I took my first job in book publishing, as an editorial assistant at University of California Press in 2000, I left behind the frenetic pace of the dot-com boom and entered the quiet, thoughtful, tortoiselike world of traditional print production. At the Press, my boss kept her files in three-ring binders that had more than a few years on me. We filled out forms for the Library of Congress on a typewriter. And the designers talked about fonts with the kind of devotion that people usually reserve for their grandchildren.

British journalist Simon Garfield shares that devotion, laced with humor and backed by extensive research, in his book Just My Type, out in a handsome new edition that we selected as a September Book of the Month. He skillfully takes a niche subject mainstream by offering examples of how we interact with fonts in both our mundane habits—riding the bus, shopping for groceries—and our creative ones, with a particular focus on album and book covers. If you have even a passing interest in the relationship between words and design, you’ll be entertained by Garfield’s lyrical descriptions of typefaces (“Cooper Black is the sort of font the oils in a lava lamp would form if smashed to the floor”) and the clever way he displays them as he analyzes their origins and impact.

For kicks, the Amazon Books team checked in with Garfield to see what he thinks of the fonts our company uses. Here’s his reply in full:

The world’s leading online retailer has quite a typographic task on its hands: how to design pages that look clear and efficient but also personable and warm? They’ve clearly nailed it, because I hardly notice the type as I’m clicking through. There’s a lot happening on every page, with several weights of Helvetica proving an ever reliable standby. The Amazon logo is a custom design, employing something close to Officina Sans that makes it look bold and modern. The combination of the two different fonts works surprisingly well, and that arrow (a suggestion of swiftness, no doubt) adds a zingy personal touch.

We’re flattered, sir. By way of returning the compliment, I’ll tell you that I meant to page through Just My Type in bits and pieces but instead found myself squished into a corner booth in a very dark bar, devouring the whole thing by the light of my cell phone. Then again, I’m also the sort of person who keeps letterpress blocks on my desk at home. They were a parting gift from my boss at UC Press—she could read me like a book.