"Getting radical is something done with immediacy" 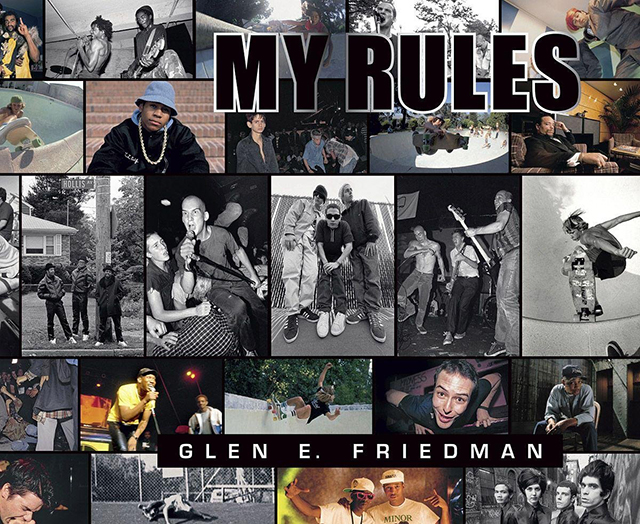 Since the early 1970s, Glen E. Friedman has chronicled the rawest expressions of individualism he could find, wherever he found them. As a teenager, that meant Southern California, where he trained his camera on the pioneers of "sidewalk surfing" as they invented an ecstatic art form on city streets, impromptu ramps in abandoned lots, or wherever NO SKATEBOARDING signs were posted. His up-close photographs not only documented the acrobatics and the implacable defiance of the skaters - including Jay Adams and a young Tony Hawk - but helped define a culture as it exploded into suburbs across the nation, leaving swaths of flowing hair, skinned knees, and broken wrists in its wake.

That was just the beginning. Never differentiating between forms of rebellion or the opportunities to record them, Friedman moved onto the punk rock and hip hop movements of Los Angeles and New York, where he captured influential artists at their moments of ascendance. Favorite subjects included Public Enemy, Black Flag, Ice T, Dead Kennedys, Run DMC, and the Beastie Boys (at their most boyish). His work, including over 100 album covers, disregarded every line and boundary - neighborhood, artistic, and especially color; his only requirements were audacity, nonconformity, and a compulsion to make noise and something new. "Breaking life up into different categories is bullshit; it's all one thing."

My Rules - titled after his successful, self-published zine from the early 1980s - collects hundreds of iconic images by the photographer the Washington Post called "one of the greats of his generation," from his early work with the Z-Boys in the dry swimming pools of Beverly Hills to the Occupy Movement 40 years later. As Shepard Fairey writes in the foreword, "He's an activist for the things he believes in, with the camera as a tool to amplify the essence of the subjects he idealistically champions. Glen is not a voyeur; he is a participant who helped create the scenes pioneered by his subjects."

Here are a few pictures from My Rules, courtesy of Rizzoli. (Click for larger versions.)