Gift Book Suggestions for the Imaginative, the Curious, the Weird 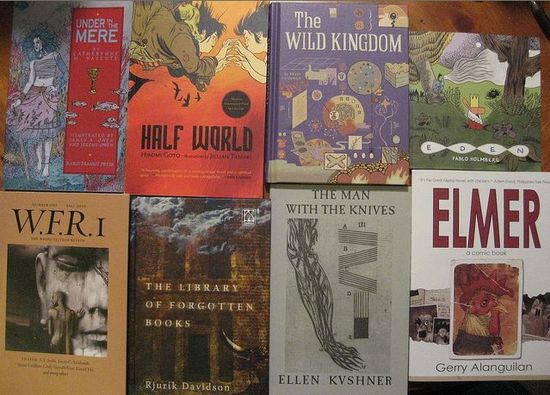 As the co-creator of a quirky gift book this year, The Kosher Guide to Imaginary Animals, I've come up with some field-tested suggestions mostly from the last couple of years that might just do the trick. Because I am heartless I have included two titles in the photos that you’ll have to search relentlessly to acquire: Catherynne M. Valente’s Under in the Mere and Ellen Kushner’s The Man With the Knives. But because I am also not without empathy, I’ve added a couple not pictured that are more readily available…

Half World by Hiromi Goto (Viking) – Goto's phantasmagorical and often harrowing novel has already received the 2010 Sunburst Award and made the long list of the IMPAC Dublin Literary Award. Neil Gaiman contributed an enthusiastic blurb. Featuring a strong daughter-mother relationship and a heroine both realistic and brave, the novel is a potent beautifully written and deeply felt mix of fantasy and stark reality that reminds me favorably of the work of filmmaker Miyazaki. It also avoids cliché by refusing to indulge in stock situations. Jillian Tamaki's bold yet whimsical illustrations add further layers to the text and transform the book from a compelling read into a good gift book.

The Wild Kingdom by Kevin Huizenga (Drawn & Quarterly) - In The Wild Kingdom,Glenn Ganges blindly interacts with the nature of his suburban neighborhood: dead houseplants, a recipe for graysquirrel brain, and pigeons eating discarded french fries in the parking lot of a fast-food joint. Starting off wordless, The Wild Kingdom grows more complex page by page, ending with encyclopedic entries, biographical excerpts, anthropologic flowcharts, and a cataclysmic encounter of nature and technology. It’s a beautifully constructed book, with marvelous endpapers and great production values.

The Weird Fiction Review, edited by S.T. Joshi (Centipede Press) – Got a budding, dormant, or fully-formed weirdling on your gift list? The first installment of a new fiction/nonfiction journal dedicated to writers like Lovecraft, Algernon Blackwood, and their modern descendents is a beautifully produced book with French flaps and full-color plates of art by David Ho inside. Original fiction from Marc Laidlaw and others is balanced with nonfiction about Neil Gaiman, Clarke Ashton Smith, and more. This journal is just out and hasn’t gotten much publicity, but it’s an important new addition to the supernatural fiction field. Any weirdie you’re shopping for will love you for it.

The Library of Forgotten Books by Rjurik Davidson (PS Publishing) – This sleek and mysterious hardcover first collection turns the spotlight on an exciting new dark fantasy writer. Visit the metropolis of Caeli-Amur, where rival Houses of thaumaturgists battle one another, ruthlessly employing philosopher-assassins. Enter the totalitarian city of Varenis, whose librarians every week consign thousands of forbidden books to obscure shelves. The product of a fecund imagination, this is the sleeper cult classic collection of the year and well worth seeking out.

Elmer by Gerry Alanguilan (Slave Labor Graphics) – Elmer is a window into a world where chickens have suddenly acquired the intelligence and consciousness of humans, where they can now consider themselves their own separate race. Recognizing themselves to be sentient, the inexplicably evolved chickens push to attain rights for themselves as the newest members of the human race. This is edgy stuff and in lesser hands might’ve been too absurd. Instead, it’s riveting and thought-provoking. Originally self-published by the author in the Philippines, this is the first US edition of the book. A highly recommended graphic novel. 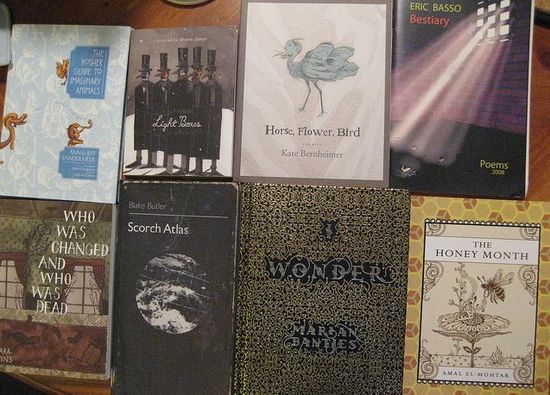 Light Boxes by Shane Jones (Penguin) – Quirky town, quirky people, quirky rituals, all in a tiny little paperback package with a dustjacket over the covers, including a different image. The effect of this short episodic novel is as if Ray Bradbury went emo, but stops short of cloying. Anyone who enjoys whimsy and a deeply original imagination should enjoy Light Boxes. It's not without bite.

Horse, Flower, Bird by Kate Bernheimer (Coffee House Press) – Illustrated by the legendary Rikki Ducornet, this odd and captivating collection showcases Bernheimer’s talent for writing truly original fairy tales. From Booklist: “By turns lovely and tragic, Bernheimer’s spare but captivating fables of femininity resonate like a string of sad but all-too-real and meaningful dreams. This is a collection readers won’t soon forget, one that redefines the fairy tale into something wholly original.”

Poetry, Fiction, and Essays by Eric Basso (various) – Eric Basso, whose infamous Beak Doctor is still a classic of avant garde Gothic from the 70s, has turned his hand in recent years to poetry, which is just as dreamlike, surreal, and darkly beautiful as his prose. The weirdie or weirdling or gothic or darkwave gift receiver on your list will thank you for introducing them for something this original. Whether it’s in the form of his stories, novel, plays, essays, dream journals, or poetry, Basso is the truffles-and-caviar of weird literature. Check him out. 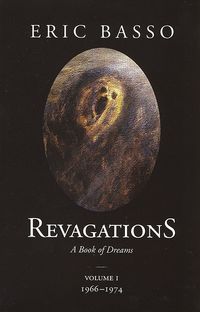 Who Was Changed and Who Was Dead by Barbara Comyns (Dorothy) – But sometimes you don’t want out-and-out weird, do you? Sometimes you want the suggestion of the strange intruding into the real world. Hence, the inclusion of Who Was Changed and Who Was Dead, reissued by the excellent new publisher Dorothy this year. From dead animals to drowning, madness and cruelty, Comyns has, as Graham Greene called it, the ability to observe “with childlike simplicity the most fantastical or more ominous occurrence.”

(BONUS: For a Dorothy publishing two-fer, add Renee Gladman’s Event Factory, not a reprint, about a linguist in a foreign city in which, as Publishers Weekly wrote, “people speak in extravagant gestures, maps do not correspond to landmarks, the streets are swathed in smoke, and people are fleeing en masse.” Another compact, smartly designed book from Dorothy. Thank you, Dorothy! You make good books.) 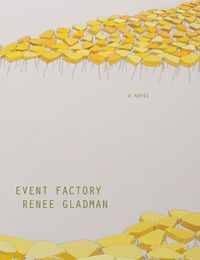 Scorch Atlas by Blake Butler (Featherproof Books) – This cult classic in the making, which launched the writer’s career, is a long, slender trade paperback with the interior attention to detail familiar to readers of Featherproof Books. The book consists of a series of stunning short fictions that chronicle “strange apocalypses” that have hit America. “Entire neighborhoods drown in mud, glass rains from the sky, birds speak gibberish, and parents of young children disappear. Millions starve while others grow coats of mold. But a few are able to survive and find a light in the aftermath, illuminating what we’ve become.” Comparisons to Kelly Link and Gass are entirely appropriate.

I Wonder by Marian Bantjes (The Monacelli Press) - Quirky, poignant, astute, funny, this unique book presents “a compelling collection of observations on visual culture and design, written and illuminated by world-renowned typographic illustrator Marian Bantjes.” In Stefan Sagmeister's telling words, Bantjes's work is his "favorite example of beauty facilitating the communication of meaning." I bought this book in London and it’s possibly one of the most beautiful things I’ve ever owned--and full color throughout. Here's an example of an interior page: 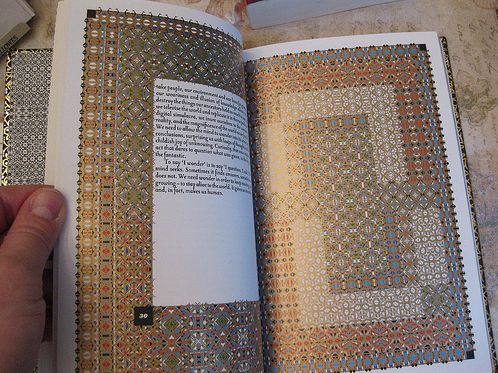 The Honey Month by Amal El-Mohtar (Papaveria Press) – This illustrated volume of short fictions and poems takes as its inspiration the author's tasting of 28 different kinds of honey, one per day. Each tasting leads to a different literary creation, but she begins each entry by describing the honey in terms that will be familiar to wine connoisseurs. To top it all off, Oliver Hunter's finely rendered color illustrations make encountering such rich, heady prose even more delightful. A lovely introduction by Danielle Sucher, whose honey provided the inspiration, is also unexpectedly moving. The book's a slim 73 pages for a reason: like the honey described, any more and it would be too rich for most readers. As it stands, however, The Honey Month is the perfect length, and the perfect gift.

Black Static magazine, edited by Andy Cox – This UK-based magazine of dark fantastical fiction has an excellent track record of delivering disturbing fiction that’s superbly well-written, along with a rich mix of nonfiction and reviews. You can buy individual issues through Amazon. The magazine is also expertly designed. 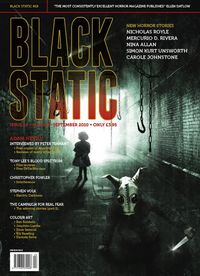 The Revisionist by Miranda Mellis (Calamari Press) - If you need a gift for someone in a mood half-way between reality and Kafkaesque, The Revisionist is the book for you. The title character "conducts covert surveillance on a Saunders-esque city whose inhabitants are subject to uncanny transformations as a result of catastrophic weather, political corruption, invasive technologies and environmental degradation. Hired to spin, or 'revise,' the facts, the revisionist's perceptions in turn become detached and distorted--inevitably unreliable yet all the same, revealing. " Calamari does very nice editions,and the illustrations by Derek White add to the overall sense of dislocation. Here's an amazing example of that art: 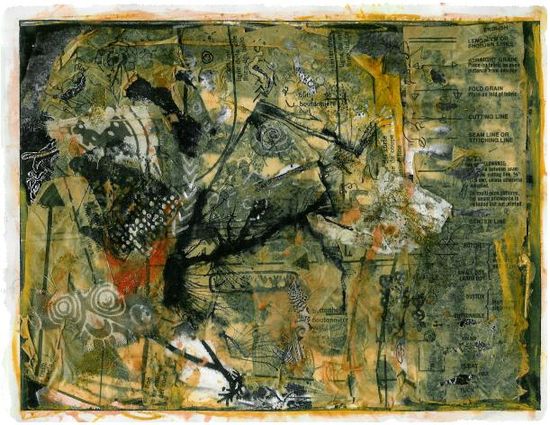 And there you have: just around 20 gift book suggestions for the imaginative, the curious, and the weird. (For slightly more traditional fare, check out this recent SF Signal Mind Meld that features a variety of gift ideas for the SF/Fantasy fan in your life.)

Ask the Editors: Not...
Read