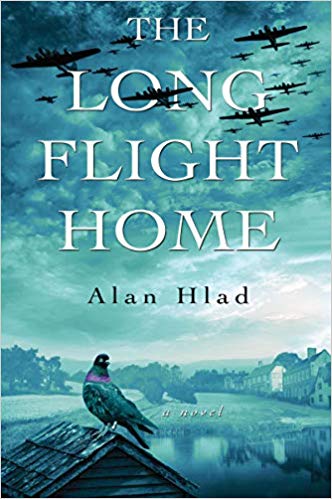 How does an author decide what to write about? In the case of author Alan Hlad, it all starts with a fascinating piece of inspiration. The Long Flight Home is a novel of historical fiction set during WWII. In the story, young Susan Shepherd lives with her grandfather, having lost her parents to influenza. She finds comfort in raising homing pigeons,and she has developed a strong bond with them--none more strongly than with her pigeon Duchess.

It was a grim time. France had fallen, and German bombs rained down on England in preparation for invasion. It was also a time of untold heroism--and in the case of this story, little known courage and inspired resistance.

Read on for a note from the author:

A Note from Alan Hlad, author of The Long Flight Home

In 2012, I became captivated by a British news report about a man who made an extraordinary discovery while renovating an abandoned house in the Surrey countryside. In its chimney, he found the skeletal remains of a homing pigeon. Attached to its leg was a small canister that contained a coded message that had been written during World War II—one that has yet to be deciphered by cryptologists around the world.

Did you know that homing pigeons played an important role in World War II? I must admit, I knew little—prior to conducting research for this book—about pigeon fanciers or the heroism of their war pigeons. But as I investigated the story, I was surprised to learn that homing pigeons were used extensively in World War II. In fact, the National Pigeon Service, a volunteer civilian organization in Britain, delivered over 200,000 war pigeons to British services between 1939 and 1945.

There are several theories for the extraordinary navigational abilities of homing pigeons, including one belief that they can detect the Earth’s magnetic field lines to find their way home. Pigeons live in groups and both parents raise their nestlings. I simply like to believe that homing pigeons are devoted to family, and they will go to great lengths to find their way home.

While the story of Susan and Ollie is fictional, the novel is based on real historical events, which I strived to accurately weave into the timeline of this tale. The setting of this novel takes place during the early stages of the war, a despairing time for Britain. In June 1940, the British evacuated over 300,000 Allied troops from the beaches and harbor at Dunkirk, and Hitler’s army conquered France in 46 days. The outlook for Britain and the Allied forces appeared grim, especially with the United States refusing to join the war. Matters grew worse a few months later when Germany commenced a massive bombing campaign against Britain, which would result in immense destruction and the deaths of 43,000 civilians. I will forever be inspired by the resiliency of the British people who endured eight months of relentless bombing—from September 1940 to May 1941. In addition to the valiant efforts of war pigeons and their keepers, it is my hope that this story will honor the men, women, and children who perished in the Blitz.

I often wonder what is written on the indecipherable message, carried by the war pigeon that was found in the Surrey chimney. Maybe it contains information about Operation Sea Lion, code name for Hitler’s plan to invade Britain. Perhaps it is a last-ditch communication from alone British soldier, trapped behind enemy lines, or like The Long Flight Home, the encrypted note is far more than military intelligence. Until the code is broken, I like to believe the message will someday reveal—despite the tragedy of war—that hope is never truly lost.

Ruth Reichl on "Save...
Read