Chatting with Calvin Hennick about his memoir, and our debut spotlight for December, 'Once More to the Rodeo' 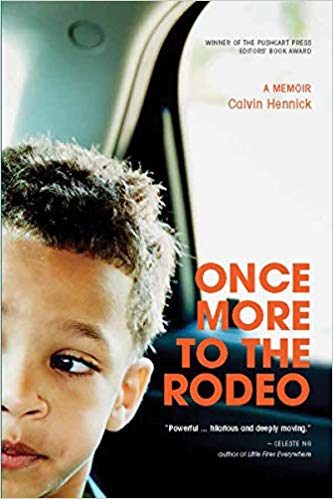 We named Calvin Hennick’s probing memoir, Once More to the Rodeo one of our Best 100 books of the Year and it’s our debut spotlight for December. It almost didn’t get published, but it finally found a home with Pushcart Press and I for one am thrilled it did. Hennick’s memoir is searching and inquisitive, funny and profound, and asks big questions like what does it mean to be a man in today’s world? How do you explain the world to your son when you’re white and he’s biracial? What happens when you want a drink, but know that one will lead to the whole bottle? Can you be a good father if you didn’t really have one?

Hennick does not pretend to have all of the answers. Instead he goes on a father-son road-trip to spend time together and think through the thoughts that keep him up at night. The destination is the annual rodeo (an interesting test of manhood in its own right) in his hometown in Iowa. On the road we are graced with the humor of his five year old’s quips and questions, the simple dedication of Hennick to tell his son how much he cares, and the exploration of Hennick’s difficult childhood.

While I’m not a parent, this memoir deeply moved me. It made me realize that we will always have questions and there are no silver bullets to these questions, but for those of us that take the time to think through them and genuinely engage with what life presents us, the better we will be and the better the next generation will be. So, thank you Calvin Hennick for diving into waters not often chartered and for sharing your doubts, fears, kindness and questions with us both in the book and during our phone conversation about Once More to the Rodeo.

Al Woodworth, Amazon Book Review: What inspired you to write this memoir?

Calvin Hennick: I was obsessed with this idea of how to be a good man and how to be a good father with the constraints I had (which I share early on the book)--that my dad wasn't around, that that I had a second father figure, my grandpa, and he was like ‘see you later’ three months after he adopted me. And at the time when I was thinking about starting to write this, every week in the news there was another unarmed young black man being shot. Then, waves of people rushing to blame the victim. It’s not just the fact that people were unsafe, but also, a kind of darkness.

I flash forward to this in the book, but I took my son to a Boston Red Sox game at Fenway park and the fan next to us used the N word to describe the woman who was singing the National Anthem. And I’m not sure that that word would have been used for or five years ago. It feels like people have this kind of implicit permission to be their most native, or horrible, self. I wanted a bucket to put all these questions in and to sort through, which ultimately became the book.

Why did you decide to go back to your hometown?

I knew I wanted to take my son back to Iowa – to the Old Settlers Carnival, and I wanted to go back—I had nostalgia for the place, even though I was convinced as a teenager that I would never come back or live there. I don’t want to live somewhere where my children are curiosities. We live in a really diverse suburb of Boston right now and that’s really important to us. I’ve been thinking for a long time about my family and I had tried turning my upbringing into a memoir before, but I never found the structure or story line that felt like it would carry a whole book. This trip with my son felt like a way to talk about all of the things that I wanted to talk about and ask questions about all the things I wanted to question.

I loved the dichotomy of your voice and your son’s voice on the road trip. You’re wrestling with these really big issues – whether in a conversation or monologue with your son, or just in your head – and then your son will jump in with these razor sharp observations that are simple, but also so authentic, apt, and funny.

I recorded our conversations on the road because I didn’t want to recreate his voice. And, he has a really distinctive voice. There’s this wisdom of children, where he’s just able to break things down to there elemental core. Like the part about my son’s fear of mortality, which is a little bit dark, but as adults we construct this make-believe about how it’s okay that we’re going to die. And, my son just said ‘no, it’s very much not okay.’ And, he’s the one being honest about it, I feel like.

You also grapple with how to talk to your son about race. Can you talk about that a little bit.

There’s this part that I talk about in the book, when he asks if he is white or black. And I do an internal monologue where I don’t tell him the real answer because the real answer is hopelessly complicated. The child’s view of race and racism is everyone should get a long and racism is bad. And, that’s the correct and proper way to look at it. It's hard to talk to your five year old in a way that they’re going to understand about white privilege, or implicit racism, or de facto segregation. My kids go to school in a place where black and white kids go to school together – and that’s more than 65 years after Brown v the Board of Education. And it’s hard to explain to five-year-olds that they go to school in the way that they do because we don’t have legalized segregation anymore. I still don’t really know how to talk to a five year old or even an eight year old about all of these things, but we try. Not all the time, of course, but we try.

We’ve been reading this book about Ruby Bridges, and I try to talk to them about there are people that came before us that made our lives possible. Ruby Bridges, Jackie Robinson, the Lovings in Virginia and how it’s important for us to be mindful and grateful for those people because our lives couldn’t exist without them having gone through a nightmarish reality.

This book investigates a lot of hard truths about your childhood--your father left, and you were later adopted by your grandfather and then he left. You talk about in the book how it's nearly impossible to reconcile that people can love you but then can fail you. Was it hard to write?

I like writing about my kids. Diving into the past is always something that I struggle with, especially finding the threads of causality, because I think that those are really unknowable. I can tell you what happend and I can tell you where I ended up, but I'm wary of being too much like 'my dad wasn't around, so this is why I am like this.' I don't how much you can draw or pinpoint those specific threads.

Did you read any books while writing this memoir?

The Glass Castle blew me away. I need to read it again, because I sill don't understand how it works. It's almost all showing and very little telling and that's so strange for a memoir to not have any meaning-making happening. It's so good. I read lots of books about manhood and fatherhood or memoirs about my impending fatherhood--anything I could get my hands on.

I think what struck me about the book was that you're incredibly humble in your approach to dealing with these big questions. You don't necessarily answer them, but you're addressing them head on. It's really about the journey of the road-trip. It's an evolution - there's no clear ending to any of these big questions.

It’s sort of the same thing that I hit at the end of the book, how I think forgiveness arcs or redemption arcs in literature are often BS. It’s about the story, it’s about the journey. I’m always going to have these questions, just because I wrote a book, doesn’t mean they go away. The things I’ve struggled with, I’ll continue to struggle with. As my son said, “we’ll be better together.” Which is crazy for a four year old, but when he said that I was like oh, yea, that’s what we’re going to do. We’re both going to keep trying.

This interview has been edited and condensed.

Once More to the Rodeo: A Memoir
Calvin Hennick
Print Book