The best literature and fiction of 2019

The Amazon Books editors name the novels you need to read this year. 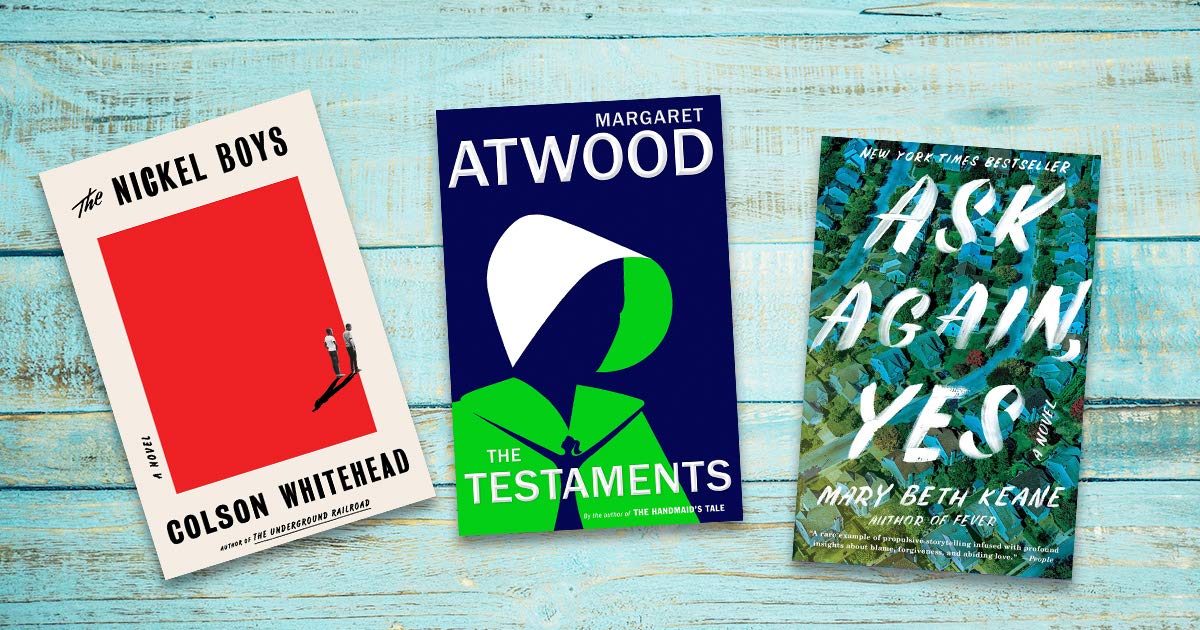 A study released by the Kingston University in London revealed that people who read a lot of books—particularly fiction—are nicer, kinder, and more empathetic. But where to begin? Fortunately it's been an embarrassment of riches this year—full of profound, entertaining, harrowing, and moving novels (one or 20 of them just for you). Below you'll find a handful of our favorites. To see the full list, click right here.

The Testaments by Margaret Atwood

One of the stand-out literary stories of the year was the highly anticipated sequel to a modern dystopian classic. Would Margaret Atwood’s The Testaments, the follow-up to 1985’s The Handmaid’s Tale, live up to the hype? It absolutely does, making it not only our top pick in the literature and fiction category, but our favorite book overall. Ms. Atwood has said that this “tale of hope and courage narrated by three strong female voices appears to have connected to this crucial 2019 moment.” We couldn’t agree more. —Erin Kodicek

Newlywed Isra thought life would be different when she immigrated to America from Palestine, but her dreams were quickly dashed. You’ll need to steel yourself the more you delve into Etaf Rum's penetrating debut novel A Woman Is No Man, which follows Isra’s journey, and that of her daughter Deya. The clash between dual cultures creates much of the drama, as Deya tries to do what her mother ultimately couldn’t—break free from their family’s violent, misogynistic past and forge her own path in life. While A Woman Is No Man is a rallying cry to resist patriarchal strictures designed to keep women in ‘their place,’ it is also a love letter to books and their transformative power. Reading was one of the only comforts, and acts of rebellion, that Isra enjoyed, and she had a particular affinity for literary heroine Scheherazade: “For a thousand and one nights [her] stories were resistance. Her voice was a weapon—a reminder of the extraordinary power of stories, and even more, the strength of a single woman.” It’s the harnessing of that strength that sets Deya, and this family, free. —Erin Kodicek

Mary Beth Keane is a fantastic writer. She has the kind of authorial magic that makes her characters appear in the imagination as complete, fully realized human beings. They are alive—and Ask Again, Yes is about the entirety of those characters’ lives. Told in alternating chapters, the book is a domestic novel about two families who wind up living next door to one another in the 1970s. Both of the fathers are cops working in the same precinct. They aren’t that close, but two of their children—Peter and Kate—develop a relationship. Peter and Kate provide the through line to the story, a line that is broken by a violent act. When they do reconnect they will spend the rest of their lives dealing with the fallout from their early years, as will their family members. As readers we will watch as their lives move from promise to actual experience to finally examining and understanding how it all happened. —Chris Schluep

Based on a real school for boys that closed in Florida in 2011 after more than 100 years in existence, Colson Whitehead’s Nickel Academy is the kind of institution that purports to rebrand bad boys into good young men. So in theory it should be a good place for Elwood, a young black man who, although he had planned to attend a nearby college, was caught unknowingly riding in a stolen car. But what happens inside Nickel Academy does not match its public image, and Elwood is about to learn that, no matter how idealistic or optimistic he is, his life is taking a very bad turn. He is lucky to meet Turner, who does not share Elwood’s idealism and who helps him to survive Nickel Academy. But what Elwood experiences there will never leave him. Set in the 1960s during Jim Crow, The Nickel Boys is both an enjoyable read and a powerful portrayal of racism and inequality that acts as a lever to pry against our own willingness to ignore it. —Chris Schluep

All This Could Be Yours by Jami Attenberg

By all accounts, the mysterious and mercurial patriarch of the Tuchman family is a “bad man.” To his wife, this quality could actually be a turn-on, despite being the occasional victim of his basest impulses. His children, on the other hand, have borne the brunt of his pernicious nature, marking them in ways that have followed them into adulthood. So when Victor finds himself on death’s door, there’s not much love lost; only one last opportunity to try to discover what made this toxic man tick, and, with any luck, escape the lingering effects of his dubious legacy. You may have gleaned that Jami Attenberg’s All This Could Be Yours is not the cheeriest of reads, but it accomplishes what the best novels do: It helps us to make sense of life’s messiness, and find hope in the most hopeless of places. Once again, Attenberg finds the function in dysfunction. —Erin Kodicek