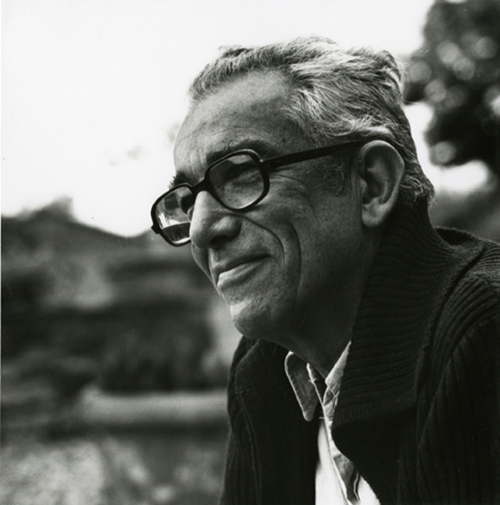 Like the flowers we plant in our gardens at this time of year, some books are annuals, and some are perennials. The perennials are the ones that continue to bloom in our imaginations, year after year. Surely some of the hardiest bookshelf perennials are the picture books written and illustrated by Leo Lionni, whose birthday is May 5.

Swimmy; Tico and the Golden Wings; Frederick; Inch by Inch: Lionni’s strong, graphic style, deliciously candy-colored palette, and stories about how individuals relate to groups make these some of the most appealing and interesting books for young children. His use of children’s art supplies, like oil crayons, and classroom techniques, like collage, give young readers a friendly sense of their own potential to create.

There is nothing in these fable-like books that’s over children’s heads, though the stories run deep. In fact, there’s so much to talk about in Lionni’s books that one pioneering teacher, Vivian Gussin Paley, created a kindergarten curriculum from them, which she described in her inspiring short account of that year, The Girl with the Brown Crayon. “Is it possible for a kindergarten class to pursue such an intensely literary and yes, long-term intellectual activity, one that demands powers of analysis and introspection expected of much older students? Why not?” Paley asked, and let her students’ lively engagement with Lionni’s work prove her point.

Lionni had a peripatetic childhood. He was born in Amsterdam in 1910, and though his family later moved to Philadelphia, he also spent time in Belgium, Italy, and Switzerland. His books seem to reflect the turbulent politics of the first half of the 20th century. In Swimmy, for example, one little fish witnesses a thuggish tuna gobbling up a school of little-fish friends. He later teaches another school to outwit bigger fish by swimming in formation. His ability to “see the big picture” helps them survive. 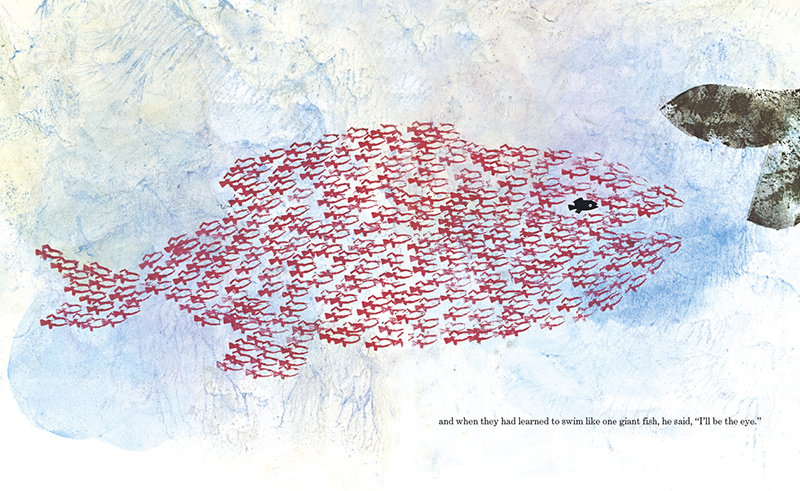 An illustration from Swimmy

As an adult, Lionni worked in advertising, in graphic design, and as a magazine art director, creating campaigns like Ladies’ Home Journal’s “Never Underestimate the Power of a Woman.” By all accounts, he loved to help people, and among the young artists he mentored was Eric Carle, who later used collage and techniques similar to Lionni’s to create books like The Very Hungry Caterpillar.

But when Lionni was 49, he accompanied his two grandchildren on a train ride from New York City to Greenwich, Connecticut, and made up a little story to entertain them. This became his first book, Little Blue and Little Yellow. In that story, two blobs of color, one blue and one yellow, are friends. When they hug each other, their colors combine, and both become green. The only trouble is that their parents refuse to recognize them in their new, green appearance.

Nick Clark, founding director of the Eric Carle Museum of Picture Book Art, which held the exhibition “Leo Lionni: A Passion for Creativity” in 2003, told me in a phone call that Lionni’s granddaughter Annie Lionni “has a very interesting theory about Little Blue and Little Yellow.” Leo Lionni, he said, designed the American Pavilion for the 1958 Brussels World's Fair and showed in it some of the racial divisions so pronounced in the States at that time. Lionni came under attack from Southern politicians for his work on the pavilion, and it’s his granddaughter’s belief that Little Blue and Little Yellow, published the following year, reflects that experience. 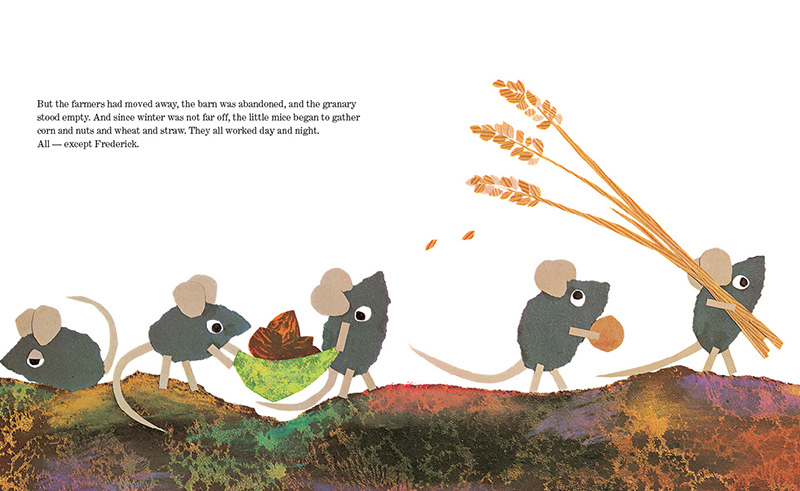 An illustration from Frederick

That book changed Lionni’s life. He and his family moved to Italy, where he began writing children’s books at the rate of one a year (thirty in all) despite encroaching Parkinson’s disease. Lionni’s longtime editor, Frances Foster, wrote of him, “He didn’t read the works of others who wrote for children, and he wasn’t influenced by other children’s book artists, though he influenced many. His inspiration and references were taken from different worlds – from Piero della Francesca, Chagall, Matisse, Alexander Calder; from the Bauhaus philosophy; and from his own Dutch beginnings.”

Nick Clark of the Eric Carle Museum sees Lionni’s influence in the work of certain children’s book illustrators who came after him, like Dan Yaccarino, Bob Staake, and most particularly Jon Klassen. “You look at This Is Not My Hat, and when the fish goes into that foliage, that’s just straight out of Inch by Inch.“

Truly perennial books are hard to find. So many children’s books become dated by the specificity of their cultural references. Lionni’s stand out, perhaps because of their simplicity and concern with the eternal values of friendship and community. His birthday is a good reminder that some books, because of their depth of meaning and continuing visual appeal, simply last. Reading them, children and adults alike have the feeling Vivian Gussin Paley described: “that wings, golden wings, have sprouted and the journey has begun.”