Writing the West, and Other Myths 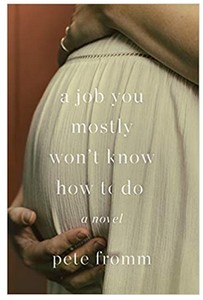 Pete Fromm's heart-wrenching but hopeful A Job You Mostly Won't Know How to Do finds a hapless husband needing plenty of help raising his daughter when his wife dies during childbirth. Our own Vannessa Cronin calls it "a quietly elegant novel about working through grief and loss by putting one foot in front of the other and about letting people into your broken places to comfort and to heal you." Five-time winner of the Pacific Northwest Bookseller Award, Fromm has been dubbed "one of the West's best literary legends." But what does it mean to write the West? Is that label even necessary? (or helpful for that matter). Here, Fromm weighs in:

Labels. Western writing. Nature writing. Outdoor writing. Sometimes those three bundled together in one ungainly mass. I hear any of those pigeon holes and it’s hard not to sigh. Western.  Instead of picturing wide, sweeping skies, the Tetons jagged peaks jutting so perfectly up out of that Wyoming river valley, what I see instead is that classic of old westerns and antique shops, the bear trap. Because, as soon as you combine Western and writing, I see those iron jaws snapping shut over another story, holding fast with the jagged teeth of clichés, myths, and stereotypes, or, if not that severe, holding that story chained down, struggling to reach anything beyond strong jawlines, haunted, horizon-aimed gazes, people held down by that vast stretch of sky, driven wild by the winds, lost among the landscape that’s bigger and tougher than us all.

I see the real stories buried beneath the piles of so many mountain men in their Hudson Bay blankets, ranchers hunching into the savage wind, painted red men pinned to their ponies with nothing but their knees, eagles soaring, grizzlies rearing, wolves pointing their snouts to the moon.  Romanticized, mythologized, marketed to a world without a clear idea of what this place truly is, it’s an awful lot to sift through to find the stories about people in these places who aren’t romanticized, who don’t hold true to the myths, who are, in fact, living, breathing people just like us, as flawed, as funny, as wondering, as searching, and, as, well, real.

Yes, they’re living their lives in a landscape different than what most people know.  The size of that country, and the census reports guarantee that.  But, still, these same emotional lives could take place in any soot-streaked city in the rust belt, the hollows of the Ozarks, or, yes, even the streets of New York.

There are differences of course, but a square-jawed man in New York doesn’t have to be the trail-bit, taciturn Marlboro man.  But, put him in Montana, and try to make him something different.  Anything.  The Tetons loom up behind him all on their own.

There can be tough, taciturn hard men anywhere.  Same with women.  All just trying to get through to the next day.  This wild, sprawling place may influence them, but it does not preordain their lives.  It’s simply the world they find themselves in. And it’s a world of unique individuals, something the labels ignore or forget.

In A Job You Mostly Won't Know How to Do, Taz is a finish carpenter, more a perfectionist at this trade than a wily businessman perhaps, but his wife, Marnie is right there with him, side by side as they renovate the starter home they can barely afford, start the family they’ve longed for.  But, when she dies in childbirth, Taz’s world zeroes down to the baby he’s left with, but at the same time opens up to the people around him who will help him through all this, build his world back up with the same meticulous care he puts into every house he finishes.

Yes, it takes place in Montana, a place they love, know, live and die in, but the emotions are universal.  It’s only the world’s need to put a name to something that makes this Western Writing, rather than simply work that makes you feel what it is to be alive in this world we all share.

A Job You Mostly Won't Know How to Do: A Novel
Pete Fromm
Print Book Kindle Book
Audible Audiobook