For those who enjoy bingeing their stories through the written word, here are six series that will keep you flipping pages long after the rest of your household has gone to sleep.

The Invisible Library series by Genevieve Cogman – I think I've put every one of Cogman's Invisible Library books on the list of the best science fiction and fantasy books of the month, and I'm always looking forward to the next one. Librarian Irene hunts down rare books on many different worlds, traveling from one world to another through the Library, an institution that very few know about, most notably the always-battling Fae and dragons. When Irene is sent to a version of 19th century London to retrieve a book, she becomes embroiled in a power struggle that could have repercussions across many worlds and could destroy the Library itself. Fun with a tough, bookish heroine, this is an excellent match for those who enjoy Jodi Taylor's Chronicles of St. Mary's series. (4 books) 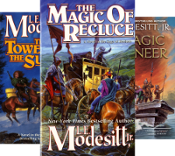 Saga of Recluce novels by L. E. Modesitt – With nineteen books and counting, Modesitt's Saga of Recluse is less a series than a chain of sometimes-but-not-always standalone fantasy stories set in the rich and varied Recluce world, where Black and White magic are in opposition. A strong magical system matched with a wide range of stories make each book a surprise but a satisfying one. Start with The Magic of Recluce. (19 books) 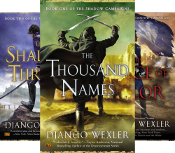 Shadow Campaigns series by Django Wexler – Fans of alternate history with a twist—like Naomi Novik's Temeraire series—will want to plunge into Wexler's fantasy series that rings with 19th century details and battlefield valor. Supernatural forces, a king on his deathbed and a country in turmoil, and soldiers who have to fight against even the worst odds give Wexler's series its power. While the first book opens the series with a focus on war and warrior, the next four books raise the stakes and add political intricacies that push it into epic status. The final book in the series, The Infernal Battalion, released on January 9, 2018. (5 books) 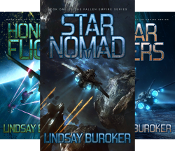 Fallen Empire series by Lindsay Buroker – I picked Star Nomad as one of the best SF books of 2016, and this action-packed, space-based series holds up through all eight books. A fighter captain recently discharged from the service after the end of war has to find a ship and make her way home, but it's not easy when you're still recovering from the last battle with no credits to your name. And the galaxy is still a dangerous place.… (8 books) 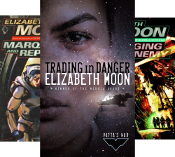 Vatta's War series by Elizabeth Moon – When Ky Vatta—who has already defied her family by joining the military instead of entering politics—is discharged from the academy in disgrace, she seizes her only opportunity to get back in a ship again by captaining a transport vessel on a milk run. But Ky's smarts and daring steer her toward greater things, whether she wants to be a leader or not. Political twists and turns give this series its complexity…and Moon has recently started a new series called Vatta's Peace that is, alas for Ky, still not very peaceful. (5 books)

Blood on the Stars series by Jay Allen – Allen is among the most prolific military SF writers today, but that doesn't mean his books lack philosophical depth or that his characters are cardboard cutouts. Allen balances space battles with truth-seeking, delivering quick reads that will linger after you've completed them. In the Blood on the Stars series, Captain Barron is piloting a beat-up battleship on the border and suspects that he and his crew are being played by an unknown enemy. Begin with Duel in the Dark. (6 books)