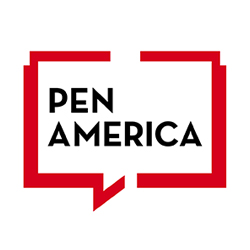 Last night, PEN America staff were turning away latecomers to the literary awards ceremony in the New School’s John L. Tishman auditorium. There simply weren’t enough seats for everyone who wanted to attend. This year’s event was a special one. Its theme of “Books Across Borders” addressed timely issues of immigration, and PEN had reconceived the evening, hosted by The Daily Show’s Aasif Mandvi, to incorporate video footage of authors discussing their work at venues including New York’s 92nd St. Y and Washington D.C.’s hallowed bookstore, Politics & Prose. There was music, too: the violinist Ernesto Villalobos accompanied Natalie Scenters-Zapico, who received the PEN/Joyce Osterweil award for an emerging American poet, as she performed her poem, “Because They Lack Country.” Hamilton Leithauser – of the Walkmen - played an acoustic rendition of Leonard Cohen’s “Democracy.”

PEN America had announced many of the winners of this year’s awards back in February, but this was the moment for those winners to receive their citations, give a short speech, and accept their awards. The biggest prizes, however, were announced live at the ceremony last night. There was considerable anticipation among the authors, agents, editors and publishers in the room, and the winners seemed genuinely surprised. Hisham Matar won the $75,000 PEN/Jean Stein book award for prize for the book of the year, The Return, a memoir of his search for the truth about his father’s death in Libya. Adonis, the Arab poet born is Syria who has described himself as a “pagan prophet,” won the PEN/Nabokov Award for Achievement in International Literature.

The PEN/Robert W. Bingham Prize for Debut fiction went to Rion Amilcar Scott for Insurrections, published by the University Press of Kentucky. Angela Morales was awarded the PEN/Diamonstein-Spielvogel Award for the Art of the Essay, for her book, The Girls in My Town.