"There Are Plenty of Murders to Go Around": A Q&A with Mystery Writers Louise Penny and Deborah Crombie 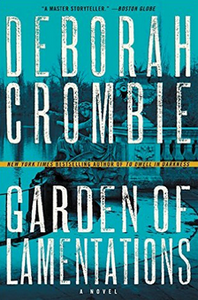 When you think of the posh Notting Hill district of West London, visions of fastidiously manicured parks and streets, and probably Julia Roberts and Hugh Grant, come to mind. But Deborah Crombie's vision is far darker, as evidenced by the latest in her very popular Duncan Kincaid/Gemma James series, Garden of Lamentations. People are turning up dead in this aptly named garden, including a young woman that Ms. James has a peripheral connection to. Here, Deborah Crombie's pal and fellow beloved mystery/thriller author, Louise Penny, asks her about the setting of this sinister story, and more.

Louise: You are an American, but it’s clear you have an abiding affection for Great Britain. What do you do to keep the setting authentic?

Debs: I’ve loved everything about Britain since I was a child, and I’ve lived in England and Scotland.  Now, I go back once or twice a year, staying for a month at a time, to do research and absorb the atmosphere.  Like that perfect autumn day we had lunch in Notting Hill, and then walked all the way across Hyde Park, do you remember? Soaking up as much London as we could and plotting books in the process. Glorious!

I try to rent flats in the neighborhoods where the story takes place, read lots of local history, and I roam London with my camera searching for the exact places where characters live or events take place.  Of course, this also gives me lots of opportunity to hang out in pubs and cafes, just listening to the rhythm of the language and getting the feel of the street.

Louise: I know many of my readers love your books as much as I do.  What do you see as the common elements that will draw them into Duncan and Gemma’s world?

Debs: I think both our series are built on a sense of community and shared decency. While Duncan and Gemma deal with the worst of human nature in their cases, as do Gamache and his team, their relationships with each other and with their trusted friends and colleagues give them a safe haven, a  necessary counterbalance to the evil they encounter—a sort of Three Pines in Notting Hill!

Louise: You do a fantastic job of weaving in just enough background that readers can jump into the series with any book. What tricks do you use to create that seamless experience for your readers?

Debs: It’s a delicate balancing act, and a challenge in every new book.  It helps that the continuing story arc isn’t usually the primary investigation.  There are plenty of murders to go around, and to keep both Duncan and Gemma busy with fresh cases in each new book. Also, every book presents a very immediate slice-of-life, which pulls the reader right into Duncan and Gemma’s world.

Louise: Duncan and Gemma value the relationships they have with their colleagues, but in Garden of Lamentations, neither is sure they can trust everyone on their teams. How does this affect their investigations?

Debs: Not knowing who to trust puts Duncan, especially, out in the cold, a terrifying experience. He can’t rely on normal investigative procedures or his official team in Holborn. And both Duncan and Gemma are forced to decide who they can—and must—depend on. This brings back favorite characters from earlier books like Doug, Melody, Rashid, and Ronnie Babcock.

Louise: Debs, there is a connected story arc that starts with No Mark Upon Her and runs through The Sound of Broken Glass, To Dwell in Darkness, and Garden of Lamentations.  What inspired you?

Debs: I knew there was more to the final events in No Mark Upon Her than was revealed in the novel.  It was then that Duncan began to question the motives and loyalty of his boss, Denis Childs, and the integrity of the Met itself. But the initial germ of the idea that culminates in Garden of Lamentations came from an article I read several years ago about a British police officer who served undercover. I was both fascinated and appalled by his story and it became part of the thread that ties the books together.

Louise: Tell me about the endpapers that grace all the hardcover editions of your books. I adore these maps!

Debs: The map in Garden of Lamentations marks the eleventh book Laura Hartman Maestro has illustrated with her wonderful drawings, and it’s such fun to collaborate with her.  Laura reads the book in manuscript, then I send her the photos I take of the actual locations in the story, along with annotated maps.  She puts all this together in ways that never fail to surprise and delight me—like including the basket-riding kittens in her new map for Garden of Lamentations.  Laura’s maps really bring the details of the books to life.

Make It a Gal-entine...
Read