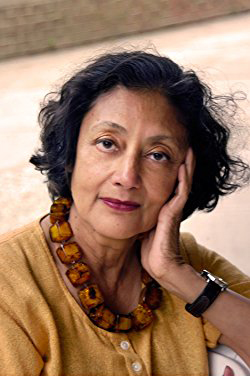 Indian-born writer Bharati Mukherjee died on January 28, 2017. The author of acclaimed short stories and novels, including Desirable Daughters (2002) and Jasmine (1989), she came to the United States in 1961 to study creative writing at the University of Iowa. Defying her conservative, Brahmin parents’ expectations that she return to India to make an arranged marriage, she instead wed fellow-student Clark Blaise. The act of marrying outside her caste “suddenly changed me into a transient with conflicting loyalties to two very different cultures,” she wrote in Mother Jones in 1997.

The couple settled in North America, and Mukherjee published her first novel, Tiger’s Daughter, in 1971. A later work, The Middleman and Other Stories (1988) won the National Book Critics Circle Award. In the course of a prolific career, she taught at several universities, lastly at the University of California Berkeley. Mukherjee felt herself to be an American writer, but she returned again and again to the immigrant experience. Her method, she once wrote, “was to make the familiar exotic… and make the exotic… familiar.”