An interview with the guys behind "Stuff You Should Know" 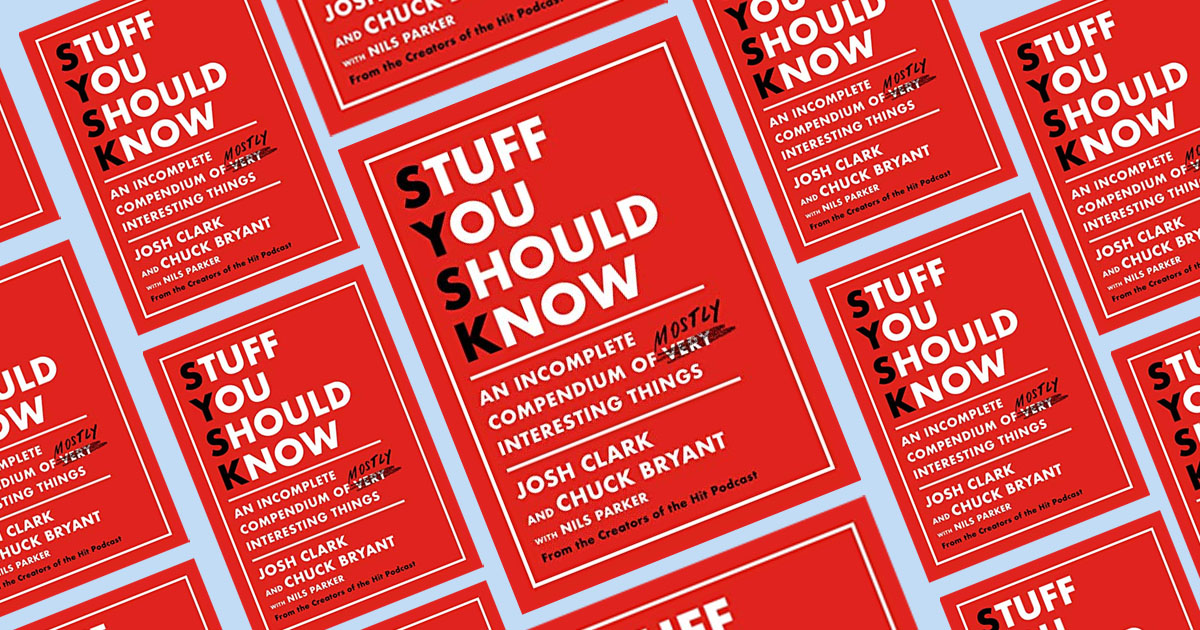 If you haven’t listened to Josh Clark and Chuck Bryant's podcast Stuff You Should Know, where they riff on the things they wonder about, I highly recommend it. The beginning of each podcast begins as a conversation between pals—it’s informal, with dad jokes sprinkled in—and then they get into dissecting how and why things work and how events, objects, inventions came to be.

In their book of the same name, Clark and Bryant indulge the most curious parts of their brains to explore and explain mezcal, Murphy beds, doughnuts, and concepts like Keeping up with the Joneses and child prodigies. The best part of the book is that it is filled with their own annotations, graphs, and images. It’s a lot of fun, just like their podcast.

We caught up with them over email, and here's our interview:

Chuck Bryant: Well, we liked the squarish look and the size, which landed between a normal novel size and a coffee-table book. It allowed for some fun illustrations alongside the text as well as a lot of footnotes, which became a big part of the book.

Josh Clark: One of the things that emerged while we were putting the book together was the awareness that we’d done a lot of episodes on things that came up in the book. In some cases you could foresee a tie-in to an episode—like in the chapter on the guy who made a perfect bid on The Price Is Right Showcase Showdown, our live episode on game shows would come up somehow.

But old episodes also came up in unexpected places, like the episodes on the Iran-Contra Affair coming up in the chapter on cyanide because there’s a longstanding claim that Oliver North had cyanide pills with him in on an undercover arms sale in Iran to use in case things went south. We hadn’t seen that coming when we started working on the chapter. We just reached some certain point where we wrote some certain amount of words in a row that were just enough to get the neurotransmitters going enough to fire the neural pathway of the memory that, “Oh, hey! We did an episode on that.”

When all those references began to build throughout the book, we decided to call them out with a little tiny SYSK icon in the text that references back to an appendix at the back of the book. So when you see that little icon in the book, it’s also an indicator of a neural pathway that fired that made one of us say, “Oh!” whether we wanted to say “Oh!” or not. It was an involuntary reflex.

How did you come up with the Stuff You Should Know podcast?

Chuck: The story is kind of boring, but it began as a work assignment. Our boss asked us if we were interested in doing an audio version of the articles we were writing for HowStuffWorks.com. We literally had nothing at stake and there was no way we could really “fail.” If it didn’t work we’d just chalk it up to an experiment that didn’t work out. But it turned out people liked it and from there it really grew very organically through word of mouth. The way I always refer to it is that we are very fortunate to have bought a nice little house early on in what turned out to be a very nice neighborhood.

Your book covers mezcal, Murphy beds, doughnuts, and phrases like “Keeping up with the Joneses.” In other words, the whole gamut. Are there particular themes or categories that you have more fun exploring?

Chuck: I love our forgotten or little-known history episodes. There is so much we weren’t taught in school and I have so much fun learning this stuff now. I consider my job kind of like a continuing education program for both us and the listener.

Josh: I like the familiarity and nostalgia of our episodes that cover pop culture topics (like our episode on Cabbage Patch Kids that comes out in early December), but I also really love the ones we do on earth science in particular. There’s something very tidy to them, whether it’s on some weather phenomenon like hurricanes or on an animal like the elephant. We (scientists, I mean) tend to understand earth science more than, say, space science, so it makes explaining it much neater and more understandable. I like space science for its weird scariness, but I like earth science for how all the parts fit neatly together.

How do you research and how did you decide the topics you want to cover?

Chuck: It’s pretty lo-fi. We just look at the world around us, we’re innately curious fellows, and the topics just kind of present themselves. We each have veto power but it’s rarely invoked. Our motto is, There’s something interesting about just about everything, so it’s all kind of fair game. From there, we dive into the research, sometimes putting together the master document ourselves, and sometimes with the help of one of three main writers we use. But even when they write the initial piece, there’s a lot of additional research and work to do. Most of our sources come from the internet, and we’ve gotten pretty good about figuring out which sources are to be trusted. Along with a lot of fact checking. Even then we still get stuff wrong—we’re not perfect! But those mistakes and corrections we issue later are a big reason why it’s relatable to folks. We never claim to be experts, just two curious guys who are pretty good at giving broad overviews on fun and interesting topics.

Josh: Readers might notice that 13 pops up here or there throughout the book; that’s in there because it’s a lucky number for me and my wife.

We also added indemnity waivers at the back of the book that we ask readers to fill out first if they decide to enter a demolition derby or go looking for the Jersey Devil after reading our chapters about those things. There are signature lines for us on them, which I think makes for a perfect spot to sign the book.

What’s the strangest/most interesting thing to each of you that you included in the book?

Chuck: Well, we both got to include a bit of our personal lives. Josh has an illustration of his dog, and I have an illustration of my daughter in the child prodigy chapter. She’s listed alongside Picasso as someone who “also does art.” Those things are fun for us and we think for the listener/reader as well.

Stuff You Should Know has entertained me for hundreds of hours—and I’ve also learned so much. Do you have a specific goal for your book and show? What do you want people to get out of it?

Chuck and Josh: Overall we just wanted to book to feel like the show, but in book form. And I think we succeeded in that. As far as the show, we’re just trying to spread knowledge and support the idea that smart is cool. I think we’ve done a pretty good job there too.

A conversation with the always curious and entertaining podcast hosts Josh Clark and Chuck Bryant. 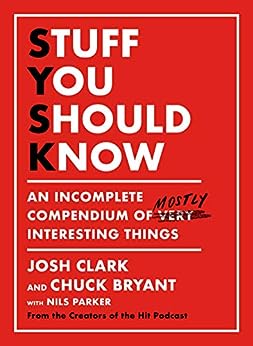 Stuff You Should Know: An Incomplete Compendium of Mostly Interesting Things
Josh Clark and Chuck Bryant