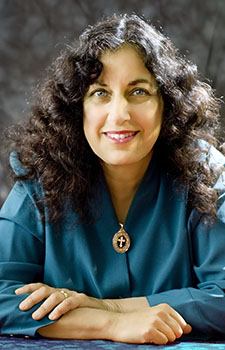 “I want to give gifts of poetry to children and teens who are being told by society that they don’t belong,” says Margarita Engle, who was appointed Young People’s Poet Laureate last week. “Latinos, Muslims, farmworkers, children with preexisting medical conditions, etc. They’re sad, angry, and frightened. Poetry is a safe place for their thoughts and emotions.”

Engle grew up in California in a family that was Cuban-American, a cultural mix she described in her memoir, Enchanted Air: Two Cultures, Two Wings. Many of her other books for children and young people address issues of Cuban heritage. These include The Surrender Tree: Poems of Cuba’s Struggle for Freedom, which received a Newbery Honor—the first ever awarded to a Latino—and Tropical Secrets: Holocaust Refugees in Cuba, a historical novel in free verse that won a Sydney Taylor Book Award for teen readers and a Paterson Prize.

Engle succeeds Jaqueline Woodson as Young People’s Poet Laureate. The title, which comes with a $25,000 cash prize, is given by the Poetry Foundation, a Chicago-based organization which is home to Poetry magazine and was the recipient of a $200-million-dollar gift from Ruth Lilly, the pharmaceutical heir. In a press release, the president of the Poetry Foundation, Henry Beinen, said “Margarita Engle’s passion, knowledge of nature, and curiosity about the world make her work fascinating to children and adults alike.”

Engle told the Amazon Book Review that in her new role she’s planning to record bilingual videos of poems read in two languages and create “monthly recommendations of poetry collections and verse novels for young readers,” alternating between books for older and younger kids. She’s eager to share the pleasure in poetry she herself felt as a child, when she “loved the poetry of José Martí and Federico García Lorca, as well as the haiku of Issa and Basho, sonnets by Shakespeare, short poems by Emily Dickinson...too many poets to name!”