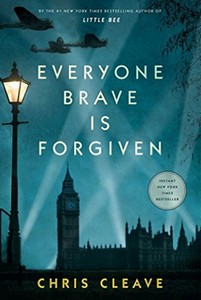 On the heels of Memorial Day it seems apropos to post this Q&A we did recently with Chris Cleave, author of Everyone Brave Is Forgiven, which is set during WWII. This novel possesses many of the ingredients of other popular books in the genre—heroes and heroines who are flawed yet admirable. Check! A love story that manages to be poignant without being precious. Check! It even has cover art that is, as an astute colleague put it, a little cartoonish but appealingly “Disney-London.” If you’re a terrible cook like me, however, you know that you can have all of the right ingredients and still concoct something utterly inedible. But this couldn’t be farther from the case with ‘Brave,’ which was inspired by love letters that Cleave unearthed from his grandparents. Examining the myriad meanings of courage, it also emphasizes the importance of challenging injustices.

A: With the great success of books like Anthony Doerr’s All the Light We Cannot See, Kristin Hannah’s The Nightingale, and now, Everyone Brave Is Forgiven, we’ve been wondering—what is it about stories set in and around WWII that so resonate and capture people’s imaginations?

CC: I think all of us are intrigued to imagine what we as individuals would become, if we were ever tested as hard as that golden generation was. Would we be the heroes or the cowards of the piece? Would we follow orders or stick to our principles, if those two things ever conflicted? Would we be the brave ones who still found the capacity for love – and for laughter – even while we were terrified?

We don’t know our hearts until life puts us to the test, and WWII fascinates because it was the last time everyone was simultaneously pushed to their limit. It was, without exaggeration, the biggest event in all of human history, and it is still within living memory. Everyone carries the weight of it with them in their recent family history, and yet it is rarely spoken about within families, because veterans and survivors don’t tend to talk. We leave it up to books and movies to talk about WWII on our behalf.

I think the recent cluster of WWII novels is so good because we have reached an optimal distance from the war. Just as a lens has its focal length, the novel also has its best distance from the action. At this point in time the war is close enough to still feel hotly personal to a writer, yet far enough away so that jingoism and heroics are no longer required. This means that a particular psychological sharpness can be achieved. We no longer need to show people being brave: instead, we can examine how they became brave. We can assume that they didn’t start out that way. If we allow that they started out just like us, then their journey into courage becomes both more fascinating and more impressive.

A: In the book, the character Mary North teaches and looks after “lost children.” Is this what your maternal grandmother did during the War?

CC: The character of Mary North is inspired by both my grandmothers. My maternal grandmother was in London during the Blitz. Indeed, the man she was dating before she met my grandfather was killed beside her in a cinema, in 1941, when a bomb came through the roof – a tragedy in which she herself was badly wounded. She was a teacher in London and elsewhere during the war, although the children she taught were not the “lost children” who feature in the novel – those come from my research. My paternal grandmother drove ambulances during the regional Blitz, in Birmingham, and her experiences informed the other half of Mary’s journey in the novel. 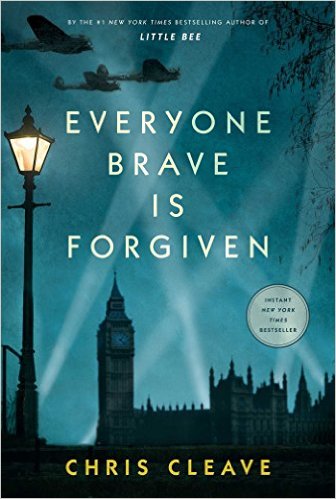 Everyone Brave Is Forgiven

A: In the letter that opens ‘Brave’ you talk about, among other things, how different wars are today and how that can complicate the reconciliation process between countries. You say, after reading the novel, you “wanted the reader to come away wondering whether forgiveness is possible at a national level or whether it is only achievable between courageous individuals.” What do you think?

CC: I write in the novel’s afterword that our recent wars “finish not with victory or defeat but with a calendar draw-down date and a presumption that we shall never be reconciled with the enemy”. I do think it is harder to acknowledge our strengths, or to forgive ourselves and each other for our shortcomings, when there has not been a result we can all agree on. And it is certainly impossible to imagine forgiving the enemy while their animus remains undefeated. Yet war doesn’t end with armistice, it only ends with forgiveness and reconciliation. I wanted to look at the differences between how we fought then and how we fight now, because the current lack of closure generates a state of psychological unease that is interesting to acknowledge and examine.

A: You traveled to Malta to research your grandfather’s role in the war. What was the most striking thing you discovered?

CC: I was astonished to find that the positions my grandfather had defended were now overgrown and entangled with trees and thorns. I suppose I had developed a sense of reverence for the locations he described in his memoirs and letters – the forts and the high emplacements. I had expected them to have been preserved in some way. And yet when I reached Fort Binjemma, for example, where my grandfather was stationed for a while, the whole Victorian fort was decaying. Barbed wire surrounded it, spray paint on the ancient walls claimed it as private property, and the moat where my grandfather and his men had grown crops – in desperation as the siege’s hunger bit – was completely overgrown with bushes and trees. Rubbish had been dumped in the main entrance: black bin bags, builders’ rubble, cracked old toilets. The desecration made me desperately sad. It also made me all the more determined to bring the island back to life as it had once been, when men and women were ready to give their lives for every precious inch of it.

A: ‘Brave’ is a book about courage. Has your definition/s of it changed after writing this novel?

CC: I think bravery means a different thing to everyone. Our own personal brand of courage – in relationships, in conflict, in our principles ­– is as unique as our fingerprints. Sometimes we don’t notice that someone is being brave, because they are only doing something that seems quite easy for us. Conversely, things that we have to really dare ourselves to do come quite naturally to others.

The ways in which we are able to express courage also depend on the hand life deals us. It is easier for a rich person to act on their principles than it is for someone with fewer choices (which is why it is all the more disappointing when a wealthy person plays to the crowd).

Something I am now convinced of, after researching Everyone Brave, is that none of us is born courageous in all respects. Courage is a muscle that develops through use. It’s no use waiting for some inner fire to conveniently become apparent at the moment of crisis – that’s cartoon stuff. Instead we must constantly dare ourselves in the small things, until courage becomes a habit of mind that will serve us when we are unexpectedly tested.