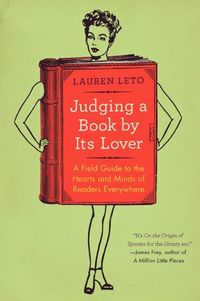 Lauren Leto is the coauthor of Texts from Last Night: All the Texts No One Remembers Sending, published in 2010, which I’d touch only if I were, say, stuck in a hostel in Italy on a Sunday without another page of English in sight. (This may or may not be why I once—once—read Dan Brown.) But with that caveat snugly in place, I’m pleased to report that Leto’s new offering, Judging a Book by Its Lover, takes today’s standard-issue literary snark and elevates it to an art form.

By turns hilarious (in “Stereotyping People by Favorite Author”: “Mitch Albom: People who didn’t go to college but do well on crossword puzzles”) and insightful (in “Open Letter to Ayn Rand Fans”: “How can you be so focused and not see that you’ve chosen the most transparent philosophy to live your life by?”), Leto manages to avoid her own traps nearly all the time. Skip the silly intro and the occasional anecdote about her love life—it’s easy to see them coming—and focus on her intelligent, biting, surprisingly useful insights about how what we read (or claim to read) reveals who we are.

But above all else, take advantage of Leto’s exhaustive “How to Fake It” chapter, which chronicles the basic facts, best-known works, and cocktail-party anecdotes about all the authors you’ll ever need to cite for street cred. If CliffsNotes had an opinion and a couple of drinks under their belts, they’d sound like Lauren Leto.

Full disclosure: Even if I hadn’t thoroughly enjoyed most of Judging a Book by Its Lover, I’d have to recommend it anyway because there’s an entire chapter about how the author never finished Infinite Jest. You might remember a certain Trend Stetter making a similar confession earlier this year.

Leto also has a penchant for cheap, ugly copies of books because “crappy paperbacks are tributes to use”—if she ever stops by my house for a G&T and a snarkfest, I know she’ll appreciate the worn stacks of novels from the annual library sale. We’re sisters of the dime-store edition. So for just a few minutes, if she catches me on a good day, I won’t judge.