Writing in a Dictatorship: Anjan Sundaram on "Bad News"

Weeks after finishing Bad News: Last Journalists in a Dictatorship* I remain captured by the paradoxes Anjan Sundaram puts forth, 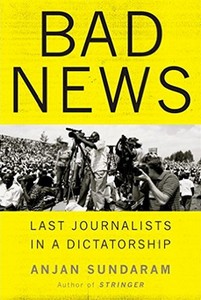 whether familiar or staggering (and there are both here). This telling of his experience operating a journalist’s training program from 2009 to 2013 in Rwanda carries a power and weight beyond the page, and I would argue, one that we should all harness to bear.

In a country where the government has so thoroughly exerted power through control, Sundaram works to understand, and in turn, reveal the need for freedom of expression. From the outside, life in Sundaram’s Rwanda is a picture of calm and peace; however, once you become immersed in the everyday you feel the reality: absolute fear. A fear that is nowhere in sight, yet everywhere – and has the ability to take you, silence you, and hold you back without any evidence other than a memory.

Here, Sundaram has given us an added look into this everyday of Rwanda and what it was like for him to seek knowledge, understanding, and expression – for himself and for those around him.

I remember a building in Rwanda that had a hole in one of its walls on the terrace. I happened to be on the terrace one day and I went up to the wall to look. To my surprise, I saw the president’s office.

The president’s office was one of the most secretive places in Rwanda. From the street one could see only high walls, the edge of a parking lot, and gates guarded by the well-armed presidential guard. Trees blocked any view of the insides. It was the central node of power in Rwanda, a dictatorship. It was in the president’s office, within that compound, that decisions were made about who would go to prison and who would be free, who would die and who would live, and virtually every other policy that affected the country and its people.

So I was surprised to be able to see this office from above, so clearly and openly. I could see the buildings neatly laid out, the well-paved asphalt roads cutting through the premises, the manicured lawns and trees. Suddenly a voice came up to me from behind: “What are you looking at?” It was a security guard. He told me, in a gentle voice, I wasn’t allowed to look through that hole. I stepped away from it gingerly. The guard asked me why I was looking through that hole when it was evident that I was staring at the president’s office. His calmness unnerved me. I told him that I was looking for no particular reason; and immediately I felt guilty. The guard scrutinized me. In my annoyance I wondered why they didn’t fill up the hole. It would be easy enough to do. But the wall was perhaps more useful to the guard with a hole in it: the hole allowed the guard to discover those who looked through it, those who were a little too curious about the president’s office.

The guard had succeeded in making me feel watched. And now when I looked I wondered why I was looking, and if I was meant to look or whether I should turn away. The act of looking had been turned into something insidious. As I wrote my book Bad News: Last Journalists in a Dictatorship, living in Rwanda, this feeling would return repeatedly. I wondered about the things I had seen and was writing about – many of which the government would not have wished to be seen. I wondered if I had been observed all along, if I was being observed at that very moment. I observed myself, doing to myself what I imagined they were doing to me. Often, I felt safest in the confines of my office, staring at nothing but the white page I was writing on. This was how Bad News was written.

*Bad News is a Best Book of the Month. 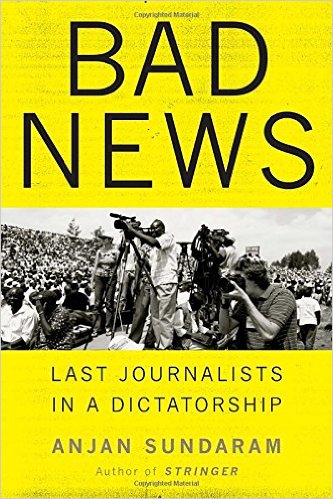