Are You Ready for the Big Game? 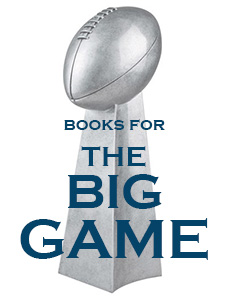 The Big Game is upon us. This Sunday—the de facto national holiday commonly known as Big Game Sunday—pits two age-old foes against each other in the ultimate athletic Thunderdome. It's the Patriots' Bill Belichick, Tom Brady, and Rob "Gronk" Gronkowski—an axis some would call "evil," exempting Gronk—versus the Los Angeles Rams' wunderkind duo of 33-year-old head coach Sean McVay and third-year quarterback Jared Goff. Forget "DeflateGate": The real question is whether the Patriots can extend their devil's bargain for one more year, staving off Inexorable Time for their sixth Big Game title in this rematch of Big Game XXXVI—the one that started the Pats' unprecedented (and probably unrepeatable) 17-year run.

If none of this makes sense—or if you can't tell a Jet Sweep from a Skinny Post, or a Nickel Package from a Nose Guard—here are a pocketful of pigskin books to get you through.

Sports Illustrated Football's Greatest SI's team of experts answer once again tackle the questions pro football fans have been debating since the pigskin started flying. Who's the greatest quarterback of all time? The most dominant linebackers? In 2012, Sports Illustrated sought to answer this question in Football’s Greatest. In the past five years, new players have come on the scene, coaches have come and gone and great games have been played.

Gridiron Genius: A Master Class in Winning Championships and Building Dynasties in the NFL by Mike Lombardi

Former NFL general manager and three-time BIG GAME winner Michael Lombardi reveals what makes football organizations tick at the championship level. From personnel to practice to game-day decisions that win titles, Lombardi shares what he learned working with coaching legends Bill Walsh of the 49ers, Al Davis of the Raiders, and Bill Belichick.

Take Your Eye Off the Ball 2.0: How to Watch Football by Knowing Where to Look by Pat Kirwan

More and more football fans are watching the NFL each week, but many of them don’t know exactly what they should be watching. This book provides clear and simple explanations to the intricacies and nuances that affect the outcomes of every NFL game.

Monsters: The 1985 Chicago Bears and the Wild Heart of Football by Rich Cohen

In what might be the best football book ever written, Cohen breathlessly recounts the thrilling narrative of the Bears' 1985 championship season. It's a story filled with outsized characters and unbelievable-but-true anecdotes gleaned from extensive interviews with the players themselves. It's a story about fathers and sons, love and loyalty, hope and redemption, and pain and joy.

Game of My Life: RAMS: Memorable Stories of Rams Football by Jay Paris

Regardless of the city or the stadium that they’ve called home, the Rams have compiled a myriad of memorable moments and at times have drawn record crowds. In Game of My Life: Rams, award-winning sportswriter Jay Paris offers accounts of many of these moments, through the words of the players who experienced them firsthand.

The League: How Five Rivals Created the NFL and Launched a Sports Empire by John Eisenberg

Eisenberg reveals that Art Rooney, George Halas, Tim Mara, George Preston Marshall, and Bert Bell took an immense risk by investing in the professional game. At that time the sport barely registered on the national scene, where college football, baseball, boxing, and horse racing dominated. The five owners succeeded only because at critical junctures in the 1920s, 1930s, and 1940s each sacrificed the short-term success of his team for the longer-term good of the League.

War Room: The Legacy of Bill Belichick and the Art of Building the Perfect Team by Michael Holley

This one-of-a-kind exploration takes football fans behind the scenes of the most popular sport in America, with unprecedented insider access to the head coaches, scouts, trainers, and players who make the game what it is—including new insights from Bill Parcells, Todd and Dick Haley, and Belichick himself.

A Gronking to Remember by Lacey Noonan

Warning: Adult content ahead! This is for readers who might be less interested in the football. And if Gronk ain't your bag, Julian Edelman is clutch.