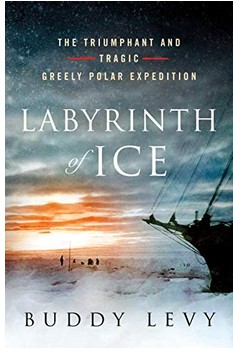 In July of 1881, Lt. A.W. Greely and his crew of 24 scientists and intrepid explorers set out for “farthest North,” a region not yet found on any map. Buddy Levy’s Labyrinth of Ice captures this perilous polar adventure, one that found the crew fighting frostbite, intense darkness, ravenous wolves, and each other.

Here, Levy describes how his treks in the wild informed and inspired his recounting of Greely's historic, and harrowing, voyage.

The following is certainly not true for all writers, but it is for me: research is much more fun and interesting and exhilarating than writing. I say this because early on, from my first book, I determined to go to the places I was writing about, to immerse myself in the landscapes and environs of the places that the historical figures I’m chronicling explored. I do this not only because I love to travel, but in service of the book and of the people I’m writing about. Going there allows me to see and feel and experience the place in physical, visceral ways that library or computer or archival research simply cannot replicate. You need to do all of it to write a good book, but for me, the travel and immersion are essential and often the most meaningful.

This immersive approach has led me to some pretty remote and fascinating and sometimes dangerous places. To best tell the story of Cortes and his subjugation of the Aztecs in my book Conquistador, I trekked the route of the conquistadors from where they landed at Veracruz in 1521 up through dense jungles and over the mountains to the Pass of Cortes. For River of Darkness, a book I wrote about the first Europeans to descend the entire length of the Amazon in 1541, I trekked over the Andes from Quito, Ecuador to a small river town called Coca, then spent weeks floating down the Amazon River in a dugout canoe to Iquitos, Peru.

The on-site, on-the-ground research for my newest book Labyrinth of Ice occurred in an unintended, inverted way. In the summer of 2003, while I was covering multi-sport endurance competitions as a journalist, I learned that the blind adventurer Erik Weihenmayer would be competing in a team-based expedition race in Greenland. I had already been mesmerized by the wilds of the Great White North since reading Jack London as a boy, and had travelled to Alaska numerous times, but the thought of foraying even farther north, to Greenland, was enthralling. I contacted the race director andmanaged to get myself invited to write about the event. I’d be traveling with a stellar photographer named Tony Di Zinno, whom I’d collaborated with in other wild places before.

We flew to Reykjavik, Iceland, then took a small plane to Tasiilaq, Greenland, a small village on the southeastern coast. After landing on a gravel airstrip, we would travel on foot or by boat for the next few weeks. I was able to convince Erik Weihenmayer—whom I’d never met before and who had recently become the first blind man to summit Mount Everest—to let me embed myself into his team as they raced through the mountains and fiords and seas for a couple of hundred miles. The landscape was like nothing I had ever encountered before. Stark and in ways frighteningly remote, but also as beautiful as the alps, as if they’d been dropped into a vast northern sea.

As I struggled to keep up with Erik and his team, I scribbled furious notes for my stories and marveled at the majestic, wild place. Peaks to 9000-feet erupted from the iceberg laden water, and there were few trails after we left the colorful village. We bushwhacked over hard, broken ground, clambering over boulders and moving warily across glaciers, ever conscious of deep, deadly crevasses. When I entered a boat with a local seal hunter, I noticed that he had no life jackets aboard his motorboat. I asked him why this was, and he pointed out to the foreboding, grey-blue water.  “The water is so cold,” he said flatly, with a lilting and clicking east Greenlandic accent, “if we hit an iceberg and sink, we don’t want it to take long to die.”

We coursed through many leads—narrow waterways snaking through mammoth icebergs. It was one of the most humbling and profound experiences of my life. The temperature dropped noticeably as we came close to the mountainous ice, and their forms and colors were impossibly beautiful but also terrifying. Some appeared like things from another time: the humped backs of dinosaurs; or the ridges wind-shorn into the shapes of serpents. Others loomed a hundred feet above us like ice aircraft carriers. As the leads tightened and threatened to squeeze our small craft, it occurred to me how tiny and insignificant and vulnerable we were. One shift of wind, one change of tide, and we might be crushed and drowned. I held my breath as we moved through to the safety of open water.

Later, back on terra firma, we summited a high peak called Polem. From the top, I gazed to the northwest, awed by the seeming endlessness of the expanse. Thousands and thousands of miles of mountains, streams, and glaciers. Bigger than anything I had ever comprehended, it made the word vast feel puny.

When I returned home, I realized I had become hypnotized by the Arctic’s spell. I was riveted by the place, its ruggedness, its isolation, its people and its history. I began reading widely about the many storied Arctic expeditions (and their frequent disasters) and I simply could not get enough of them, representing as they do some of the most compelling stories of human endurance and tenacity, in the most uninhabitable places, in history. When I discovered the story of the Greely Expedition, I knew that one day I had to tell it, and when that chance finally came, I brought to bear all of my research notes from my time in Greenland and applied them—along with detailed surviving expedition journals, field notes, military reports and diaries of Greely and his men—to my descriptions of the region those intrepid explorers encountered some 135 years before.

During my research for Labyrinth of Ice, I conjured many times those treks I made through the mountains. Hour after hour stumbling across loose scree slopes and slippery snowfields, blasted by high Arctic winds roaring up canyons. Limping onward, my feet blistered and bleeding, muscles burning with fatigue. Drinking snowmelt from glacial streams to quench my raging thirst. Freezing nights and mornings. The fickle tides of the fiords and the unpredictability of the icebergs. My recollections and musings instilled in me an overwhelming appreciation of what Greely and his men accomplished, for in the end their forays afield, their time among the floes and bergs became a matter of survival, their situation so dire and perilous that every step might be their last.

And indeed, for some of them, it was. 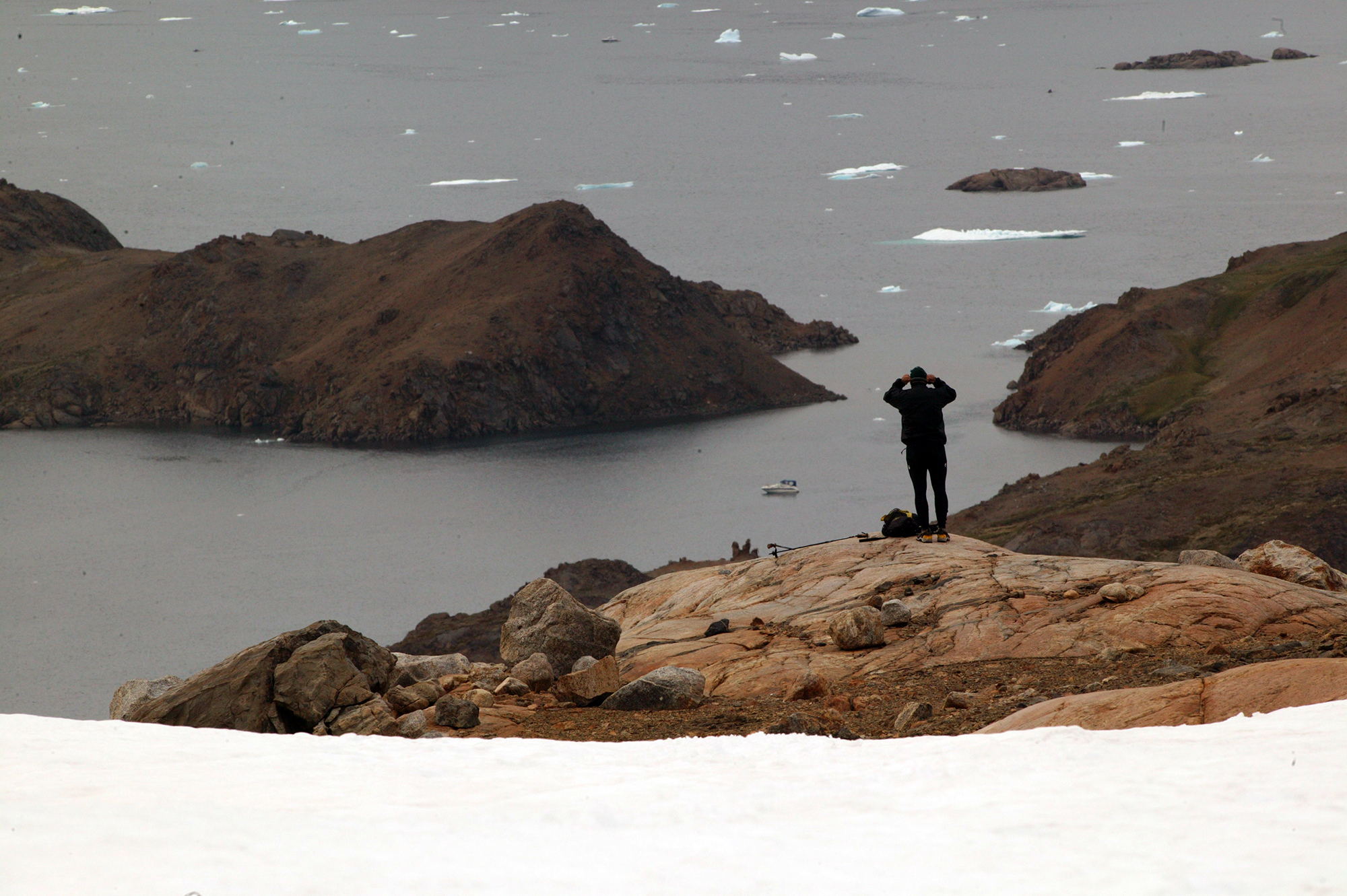 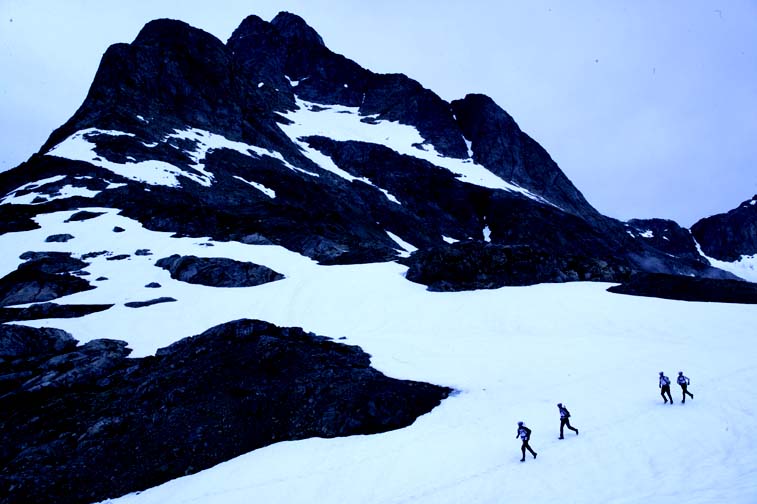 Running across a mountain snowfield. 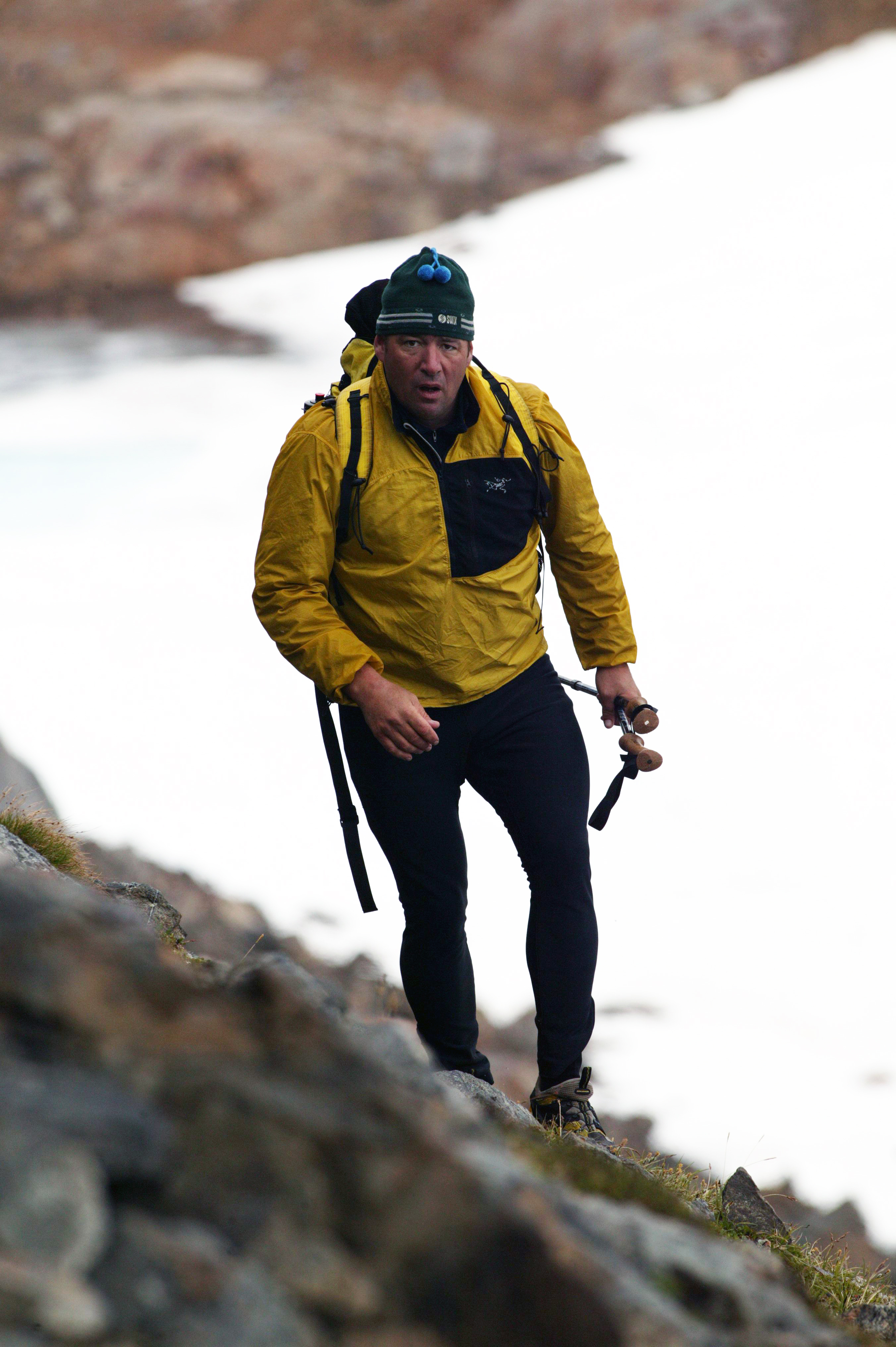