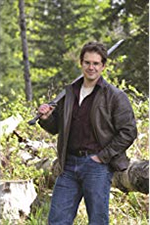 Christopher Paolini is the wunderkind author of the Inheritance Cycle quartet, which began with Eragon, and had readers clamoring for each new installment. In the years since the final novel, Inheritance, published, fans have wondered when Paolini would return to the world he first imagined as a teenager.  The answer is: now.

The Fork, the Witch, and the Worm: Tales from Alagaësia is a collection of three original stories set in the familiar world of Alagaësia and starting off one year after Eragon has departed in search of a new home for Dragon Riders.  There are many delightful extras in the new book, including artwork by the author and a piece written by his sister, Angela, in the voice of the character she inspired.

So what does Christopher Paolini read when he's not writing? We asked him to share his top three reads of 2018 and here's what he said: "It’s nearly impossible to pick only three favorite books, but I will make an attempt." See the books he chose below.

For more recommendations, see the Amazon Books Editors' picks for the Best Books of the Year.

The granddaddy of epic science fiction, it holds a special place in my heart. Beautiful prose inspired by T. E. Lawrence’s the Seven Pillars of Wisdom, prophesies, a desert planet full of giant sand worms, and epic battles. What more could you ask for?

The Wizard of Earthsea trilogy by Ursula K. Le Guin

Science fiction, although not obviously so, the book (and movie) do a superb job of capturing what it feels like to be an outsider in society. The main character, Smilla, is one of the more interesting characters I’ve read in fiction, and overall, the story has an intensity to it that I appreciate. Two thumbs up.

The Fork, the Witch, and the Worm: Tales from Alagaësia
Christopher Paolini
Print Book Kindle Book