The Necromancer: Who Else is Not Really Dead? 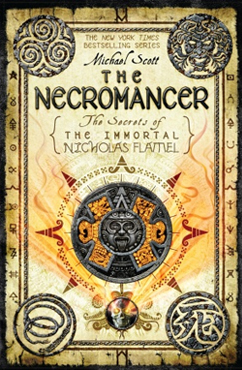 The Necromancer, book four in Michael Scott's "Secrets of the Immortal Nicholas Flamel" series, is officially out this week. I want to say this is the best book yet, but of course, when you're into a series, you always think that the last one you read is the best.

I've been trying to figure out why I enjoy this series so much. Part of the fun, for sure, is imagining that Machiavelli is riding around in a Town Car, that Shakespeare is still writing plays, that Billy the Kid is still an outlaw. For kids (and grown-ups) who love history, this is a treat. What it really comes down to, I think, is that I'm a big learning nerd. I love books that want me to seek out other books. Even if I never have the time to read stacks of additional books about Scott's immortals and beasts, or to go back and piece together the set-up for what happened in this book, or what may happen in Book 5, I know I probably could.

When Scott talked to us last year about the series, he went into some detail about how he writes the books, which gives a clue to why they're so much fun:

Amazon.com: I’ve read that you visit and thoroughly research all of the real places in your books (in Ojai, San Francisco, Paris, London) where Flamel, Sophie, and Josh’s adventures take place. Do the scenes come to life for you while you’re in the place, or do you have an idea, like, “Wouldn’t it be great to have a battle scene at Notre Dame,” and then you travel there? Can you give us a hint of some of the places we might get to see in future books?

M.S.: It is a combination of both. I first create a very detailed outline of the series, and then individual outlines of each book. So I know in advance what I see to see and where I need to go. However, once I’m there, scenes and situations will suggest themselves. For example, the battle scene at Notre Dame was always there as were the Catacombs under Paris. However, although I knew Ojai was going to be part of the story, it was only when I stayed there that I realized that Libbey Park was perfect for the finale.

Similarly, I knew I wanted to use Alcatraz, but I had to visit the island five or six times to properly map out where all the action would take place. Often this information is not included in the text, but I need to see it clearly to be able to write about it. And of course I photograph everything so I have a enormous visual record of all the places I’ve been to.

Coming up next... well, book 4 brings up back to the west coast of America and San Francisco. And then we head south towards LA, (but if I tell you any more I’ll reveal a couple of big surprises!).

There are many surprises in Book 4 (Scott hints at just a few on the book's Amazon page), including a shift for Dr. John Dee, who finds out early on that he's on the outs with the Dark Elders he's served for so long. Changes also look to be on the horizon for Josh, who may yet emerge as more than the daffy, less powerful twin of Sophie.

I'm happy to have this series to come back to every year, although I am a little jealous of people who can read all four books back-to-back this summer. Here's an excerpt from my review:

Time is running out for the Flamels; it's now been six days since their foe Dr. John Dee (another immortal) ran off with the Codex, the book of Abraham the Mage that keeps them young, and they are aging fast. The twins, who have been traveling around the world learning Elemental Magics, are worried about getting into trouble for basically disappearing for days, so they check in with their guardian, Aunt Agnes. But Scott doesn't let them settle in for long. True to the break-neck pace of this series, they are quickly pulled back into the action when Sophie is kidnapped by a redheaded vampire who bears an eerie resemblance to one of their recent allies, Scathach, who disappeared with Joan of Arc in the last book. The Necromancer introduces readers to even more infamous immortals, while keeping up with favorites from past books. The characters accumulate, and so do the opportunities for hair-raising fights and insane reveals. As they hurtle toward a conflict that could bring about the end of the world, we can't wait to see where they'll go, what they'll learn, and who they'll meet next.