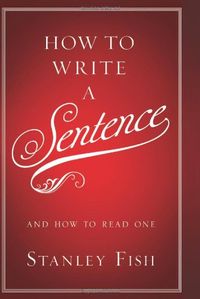 I've always been an editor of the Instinct School. I doubt I could diagram a sentence at gunpoint—if we ever had to do it during my formative English classes, I've blocked it out—and I can't cite Chicago Manual chapter and verse with the alacrity of some of my colleagues. But I know a good (or, more useful in this job, bad) sentence when I see one, and Stanley Fish's pithy new guide explains why.

In neatly curated prose, How to Write a Sentence overcomes its pedantic-sounding title with lucid explanations and sparkling examples culled from masters of the form. Mr. Fish, a New York Times columnist and seasoned academic, writes with the same clear formality as the sentence maestros he admires—Updike, Poe, James, Hemingway—as well as a hint of whimsy that reflects his fondness for citing poets, including Wordsworth and Gertrude Stein.

Though Fish notes that "verbal fluency is the product of hours spent writing about nothing," this slim volume is a model of economy. The professor’s advice is learned and literary but refreshingly pragmatic, and he takes his own lessons to heart. "Just as you can practice writing three-word sentences or sentences that travel across time zones," he counsels, "so can you practice writing sentences that breathe unbreakable conviction."

I don’t know about you, but I just got a little inspired. Let the diagrams gather dust; go forth and make a sentence or two.