Margaret Atwood on "The Testaments" 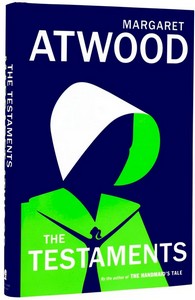 This past summer we had the rare opportunity to sit down with Margaret Atwood on occasion of the release of The Testaments, the sequel to her groundbreaking work of speculative fiction, The Handmaid's Tale. The Testaments was our pick for the best book of 2019. Upon being informed, Atwood remarked: "I’m Canadian, where modesty is a requirement. So I’m mildly embarrassed, though absolutely delighted, to hear that the Amazon editorial team has chosen The Testaments as their book of the year. While I'm no prophet, we seem doomed to live in stressful times. A tale of hope and courage narrated by three strong female voices appears to have connected to this crucial 2019 moment" (and 2020 for that matter). Here is an excerpt of our interview, edited and condensed for clarity.

Erin Kodicek: It's rare for book releases to have the sort of fanfare that The Testaments did. You are undeniably a literary rock star and yet, when we asked what your green room demands were, your publicist said: Well, she won't turn down a latte...So, basically you're handling your celebrity like a Canadian...

Margaret Atwood: It’s not the same as being a rock star, or an opera singer, or any other kind of artist where what you do is incarnated in your body. Readers interact with books, not so much with authors. No one stops me in the street and tries to remove my shoelaces--no articles of my clothing have been removed by fans. That’s not their interest. Their interest is usually in the book. As for celebrity, Canadians think it is in bad taste, and you have to downplay it somewhat. So, saying things like, You’re the best thing since sliced bread; There’s never been anything like this; This person is a deity…That translates in Canada to, not bad. If they think you’re really good, they might say not bad…at all. That’s about as high as it goes. Once you understand that, you’ll be ok.

People have called you a prophet, but one of the most chilling things you’ve said about Gilead is that it wasn’t so much invented as it was curated. What did you mean by that?

I didn’t put anything into The Handmaid's Tale, nor into The Testaments, that didn't have a historical precedent. For example, I wrote The Handmaid's Tale in 1984. In Romania Nicolae Ceau­sescu mandated that women had to have four children. Every month they were given a pregnancy test and if they weren't, it was up to them to say why. I'm guessing "My husband cannot get it up" was not a sufficient reason. The government would have just said, He’s not the only man in the world! People were jumping out of windows, they couldn’t support these kids; orphanages were full...But Ceausescu thought there weren’t enough Romanians.

What’s it like when you see women protesting in handmaid’s costumes?

As a protest tactic, it’s very smart because you’re not creating a disturbance, you’re not saying anything, and you also can’t be accused of dressing immodestly.

You are in this unique club along with writers like George R.R. Martin in that someone has taken a version of your story and run with it. How did you navigate writing the sequel given the Hulu version?

Poor George R.R. Martin has been overtaken by events, but I haven’t been. I took a lesson from him and set The Testaments fifteen to sixteen years in the future. The Hulu series had not yet gotten its hands on that part of the future. They are happy, however, because I've given them a lot more material to work with and I’ve also provided them with a few exit doors and solutions to problems they appeared to be having.

How much did you communicate with show runner Bruce Miller when it came to the sequel?

We would have back and forth conversations that went something like, You cannot kill that person…You are not allowed to make that baby disappear permanently. I need that baby!

Speaking of the TV series, you had an infamous cameo in the pilot episode as one of the aunts...

That was probably a mistake in judgement. When people ask about my legacy, it will probably be that I whacked Elizabeth Moss [the actress who plays Offred] over the head!

I read an interview with Ms. Moss about that scene. She said, and I quote: "[Margaret Atwood] didn’t want to, but then she got really into it!

I was directed to get really into it…by her! (Laughs). She said, C’mon! Hit me harder!

You do not pick up on Offred’s storyline in The Testaments. Instead you focus on three other female characters. Why did you choose the three that you did?

It wouldn’t have been possible for me to continue the story in the same voice from the exact moment in which the narrative leaves off in The Handmaid's Tale. It's something you can’t repeat. So the other way of coming at it was through three other voices who have three different takes on the Gilead world and its history. One is a young woman who grows up inside Gilead and has never known anything else. The second is one who grows up outside of Gilead in Canada, which, like Paris after the Russian Revolution, is full of emigres, many of them working to overthrow Gilead; and the third one is someone who was there from the beginning and has maneuvered herself into a position of behind-the-scenes power and influence--and that would be Aunt Lydia.

You are fascinated by how people like that come into power…

I’m very interested in how people in a regime gain their positions. What are they thinking? Why are they doing it? Either they’re true believers, they buy the whole ideology, or they are opportunists, or they’re fearful. They think, If I don’t behave in this way, then I’ll be purged next.

Had the election gone a different way, would you have written The Testaments?

If the election had gone differently, the series would have been viewed differently. Instead of being viewed as, Look out, here it comes, it would have been: Look what we narrowly avoided. So, as it was, on November 9th, everybody in the show, plus me, we all woke up and thought: We are now in a different show. Not because anything had changed, the scripts were already done, we were already halfway through shooting, but it would be viewed differently. And it was.

A conversation with...
Read