The end is nigh.

The end of Game of Thrones, that is. And with it, maybe the Golden Age of a certain kind of prestige television, too. Not that there aren't, or won't be, any more great TV shows; there actually might be too many. What I'm talking about: The kind of series that sustains cultural relevance over an extended period of time by meting out its episodes one at a time, rather than releasing an entire season in one drop. Stranger Things might command a fervent and dedicated audience, one that consumes every minute as soon as it becomes available. But once it's over, it's over—usually in a weekend. Shows like GoT—and The Sopranos, Mad Men, etc.—draw out the fun, creating a culture of digital water cooler-talk of speculation, anticipation, and analysis, much of which comes on the form of spoiler-laden recaps on pop culture websites like Vulture and The A.V. Club.

Then again, maybe you missed the moment and want to catch up. Or maybe you just want to be in on what everyone else knows without having to watch hours of TV. (I lost interest in The Walking Dead at least five years ago, but I'll still occasionally read an occasional recap to find out which characters have fallen prey to the shambling flesh-munchers. It's like reading a holiday letter from friends you like well enough, but not enough to visit.) Still, do it right! Give each episode time to breathe before launching into the next. Consider the details, and find other perspectives that add depth, understanding, and enjoyment.

To make it easier, recaps are often packaged in book form with new material like interviews and retrospective analysis, which make great reading for both first-timers and fanatics. Here are four volumes chronicling some of television's best, most iconic series from the last 20 years. 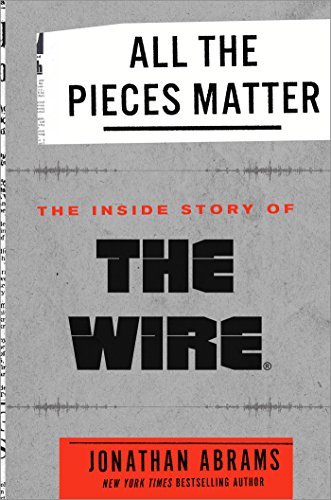 All the Pieces Matter: The Inside Story of The Wire by Jonathan Abrams

Full disclosure: I have not seen The Wire. That's not completely true: The one time I turned it on, I saw a newsroom full of long-faced reporters, depressed from the news that they were being downsized. Not what I was expecting, and I've come to learn that its scope was a bit wider than that. Don't let that dissuade you from watching. Drawing on interviews with its writers, producers, and stars, All the Pieces Matter is the definitive account of what many people say is the best television show of all-time—its conception, its five brilliant seasons, and the legacy that persists more then a decade after its last episode.

The Sopranos Sessions by Matt Zoller Seitz and Alan Sepinwall

Published to coincide with the 20th anniversary of the show that launched the "golden age of television," Seitz and Sepinwall's book revisits the groundbreaking series through this collection of recaps, essays and criticism. Those still frustrated with the ambiguous finale may be most interested in the in-depth interviews with creator David Chase, which might merit careful reading. If you catch my drift.

If Tony Soprano gave you pause, what kind of dissonance is required to root for quietly desperate suburban father-turned-fiendish meth-king Walter White? (I did the best I could with the hyphens there, folks.) Sepinwall's engaging collection of recaps, interviews, and analysis might offer you the academic detachment you need to enjoy the horror.

A middle-aged white man with impulse-control issues resorts to desperate behavior in order to defend his lie-built life from intruders on all sides. Could be Tony Soprano, could be Walter White. This time it's Dick Whitman/Don Draper (get it?), who might represent the anti-hero's apotheosis, an insatiable entitlement machine at once masterfully conniving and obtuse. Matt Zoller Seitz's obsessive, deep-diving recaps from Vulture are worth reading even without rewatching.

Whether a first-time viewer or longtime fan, you will enjoy these deep-diving companions to some of TV's most iconic series.