Welcome to Booklyn: Scenes from the 2011 Brooklyn Book Festival 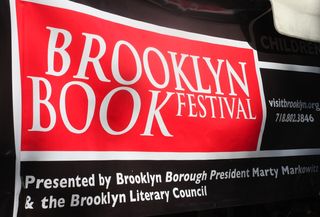 It wasn’t just the pristine fall weather that lured Brooklynites out into the streets over the weekend. They were also heeding the siren call of the most bookish gathering in this enclave of bookishness: the annual Brooklyn Book Festival.

Hipster quips about the apocalypse aside, BKBF is a mightily entertaining way to spend a few days. The 2011 fest kicked off last Thursday night with a parade of Bookend events and built to the main attraction: rows of publishers, journals, and lit-minded organizations hawking their wares and their philosophies at Borough Hall all day Sunday, followed by a closing-night party DJ’d by poet Kevin Young and novelist Colson Whitehead.

I flew in from Seattle for 48 sleep-deprived hours to sample this embarrassment of literary riches for myself. Here’s a quick tour of what you missed on Sunday if you were foolish enough to stay indoors:

Selected titles from Seven Stories Press, including Annie Ernaux’s I Remain in Darkness and A Woman’s Story.

In the National Coalition Against Censorship booth, attendees voiced their support for freedom of expression by recording excerpts from banned books. 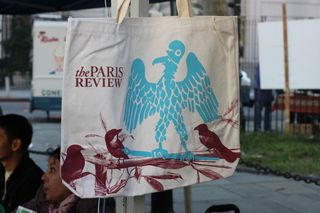 Author Rosemary Harris was on hand to promote her latest mystery, Dead Head.

McSweeney’s sold copies of its beautifully designed journals and books, including Mission Street Food, the first title in the publisher’s new cookbook imprint.

From left: Mike Ciadri, Yuri Kwan, and Elliott Holt of ReadThis, which delivers books to homeless shelters, overseas troops, schools without libraries, and other worthy recipients.

The afternoon sun glints off the devilish “Evil” issue of Tin House.