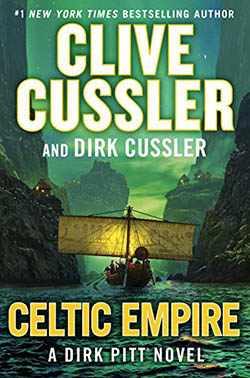 Clive Cussler died on February 24th in Scottsdale, Arizona. He was 88.

In the wide realm of career fantasies, Clive Cussler’s career might earn the throne: adventure novelist and underwater explorer.

Two of his novels—Sahara and Raise the Titanic—were made into films.

As an author, Cussler was best known for the Dirk Pitt series, which began in 1973 with The Mediterranean Caper. Cussler published his most recent Dirk Pitt novel, Celtic Empire, in 2019. It was the 25th in the series, and he co-wrote it with his son.

Like his creator, Dirk Pitt is an explorer; but he is also a government agent, working most of his career at a U.S. agency called the National Underwater and Marine Agency (NUMA).

In a case of life imitating art, Cussler helped to found a real NUMA in 1979, which in reality is a privately funded non-profit dedicated to "preserving our maritime heritage through the discovery, archaeological survey and conservation of shipwreck artifacts.” NUMA has discovered more than 60 shipwreck sites and numerous other notable underwater wrecks.

Cussler's journey from college dropout to celebrated author and explorer could have been the stuff of his own novels. His wife, Janet Horvath, announced his death on Facebook, where she wrote: "He was the kindest, most gentle man I ever met. I have always loved him and always will. I know, his adventures will continue."