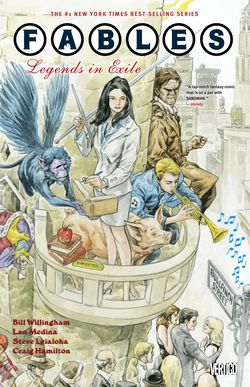 This coming December, Bill Willingham's bestselling comic Fables, a series about fairy tale characters who escape to modern day, will be 10 years old.  In a decade, the series has 14 Eisner Awards to its name (as of this post) and manages to avoid any worn-out welcomes by shifting its main plots around various folklore settings while keeping a mostly consistent cast of familiar characters in play (ex: Snow White marries the Big Bad Wolf). With so many plotlines beginning and resolving, it shouldn't surprise anyone that the author would be a fun storyteller in person, too. Recently, Willingham agreed to sit down with us to discuss Fables, Fables spinoffs, and saying goodbye to House of Mystery.

Omnivoracious.com: Your fans know you as a world-builder. What (or whose) worlds do you love?

Bill Willingham: I was just about to say, “Anyone who creates a world I would want to live in,” but my favorite fictional worlds that I enjoy reading or watching are actually the ones I would never want to live in [laughs]. I mean, like, the Firefly universe? Who would actually want to be part of that? It’s grim and it’s terrible, and bad things happen to everybody.

Bill Willingham: Very dusty. Or, like the Game of Thrones [books]. Wonderful stories, but boy, you would not want to be anybody in that world—especially when the god of that world, George R.R. Martin, just kills people willy-nilly.

Omni: What about your Fables universe? Would you ever consider moving in there?

Bill Willingham: Moving into the Fables universe? Wow, that’s a good one. I would say—right up until some of the recent events that we have planned—yes. That would be okay, but maybe not so much with what we have coming.

Bill Willingham: One hopes. Hopefully, Mister Dark is gone for a while—we’ll see. I suspect that if I ever did end up in the Fables universe there’d be a lot of characters who’d want revenge. I don’t know that I’d last too long. 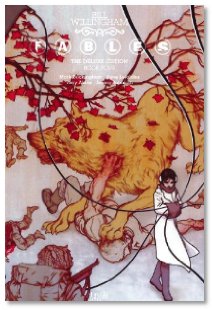 Omni: You are constantly shifting source material in Fables. The Super Team arc was quite a departure from what readers were used to seeing, pulling influences from comics rather than, say, Aesop’s Fables. Are comics our contemporary folktales?

Bill Willingham: We’re told that back in the day of Aesop’s Fables not only were these tales told as entertainment—you know, “Here’s how the fox got his bushy tail,” or “Here’s how the skunk got his stripes” sort of thing—but they were intended to be believed. I don’t think contemporary superheroes are ever intended to be believed, in the sense that next generations will look at today and say, “Yes, this was a time when Superman did exist.” They’ll always be looked at [as myths], legendarily. But, I will say that yes, they are the Aesop’s Fables, the fairy tales of our generation because even if we are not intended to believe in them, we are intended to believe in what they stand for. To take our moral and virtuous cues from these stories.

Omni: You pull so many moral cues from a variety of sources. Is this just inherent knowledge, or are you constantly doing folklore research?

Bill Willingham: Weirdly enough, real folklore scholars will occasionally cross paths with me or contact me and act like I’m part of the group, and I feel like a complete fraud. Even though I can fake it that I’m a rigorously trained, self-educated scholar—what that really means is that, no, I read books. I read the books I love. That’s it.

Omni: You’ve recently begun to dip into the Oz universe.

Bill Willingham: It was Oz’s turn. I like the Oz stuff. It’s been so long since I read the Oz books that the problem I’m finding is that the people who are up on Oz are fanatical. “Fanatical” meaning that there are folks who will correct me on the littlest thing, like when Bumpkin ends up in the Lunch-pail Tree. Todd Klein, our letterer, who is our resident Oz expert, says, “No, that’s Lunchbox Tree. There’s no such thing as a lunch-pail tree.” [Laughs.] He knows his stuff. So, it’s a little intimidating to play in the Oz universe, especially since I’ve changed so much of it. It’s now this conquered empire, and The Nome King is running everything—there’s a lot of looking over my shoulder, saying, “Don’t screw this up.” 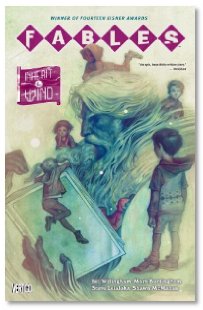 Eric Shanower, who does wonderful Oz books on his own, worked on one of our Oz issues with Bumpkin [and] he was very particular about “No, you got to get this right”—to the extent that I wanted to stay away from known Oz characters and invent my own just so he can’t say, “No, now one of those wouldn’t do this because of some esoteric little bit in one novel.” You know, it’s Oz. You gotta love playing in there.

Omni: These Oz characters come into the forefront in the latest volume, Inherit the Wind. What else can readers look forward to?

Bill Willingham: If you are a parent, keep your kids close—that’s really the story of this [volume]. It’s in the tradition of old kids’ adventure books, like The Hardy Boys and kids solving crimes and going off to war—things we didn’t see for a while in kids’ literature until the recent resurgence in YA fiction. I wanted to do the type of kids’ adventure stuff that I used to read as a kid that made me want to lead an adventurous life. Then I realized that leading an adventurous life is not as fun as just pretending and writing about it. Little safer.

Omni: One of these parents, Bigby the Wolf, has his own adventure coming up in Werewolves of the Heartland, which releases in November as an original graphic novel. Why separate this from the main Fables plot?

Bill Willingham: A couple of reasons: One, at the time that I started writing Werewolves of the Heartland, Bigby hadn't been a prominent [figure] in Fables for a while. He’d been there but was pushed off to the sideline while we did things like Flycatcher’s epic quest to be king of Haven. It would be a while before we could get to anything major with Bigby in the main book so I thought, “Let’s do this special thing.”

At the same time, I was driving from Nevada to Minnesota and just when it was time for lunch I saw a sign that said “Story City.” Now, if you know anything about me—if I see a place called Story City, I have to stop. So I pulled over—it was a very small town; it was a very picturesque town, but Story City is really a town and not a Story “City.” There was one main restaurant so I went in there and had lunch. I think I ordered an open-faced turkey sandwich, and to the waitress I said, “I think I’ll have that and a Diet Coke and a story, please.” I thought I was being very clever, and she said, “Huh?” I repeated my order—“and a story, please”—and she goes, “Why are you asking me that?” And I said, “Well, it’s Story City,” and she said, “Oh! No one’s ever asked that before.”

I was amazed. As it turns out, it was not named after a town that tells stories. There was a famous judge named “Story” who came from there and made good—even though they do now have a storytelling festival every year.

Omni: [Laughs.] And from there, werewolves? 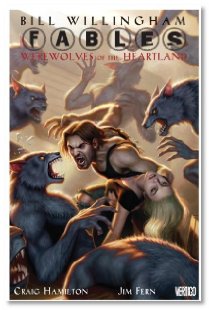 Bill Willingham: I had to tell a story set in Story City someday. I mean, how can you not with Fables? I have no idea why I decided to fill it with werewolves, but I did.

Werewolves in the Heartland is going to be a wonderful book. We’ve spent far too long doing this book but it’s going to be great. It’s a single 136-or-so-page story from beginning to end [it’s officially listed at 144 pages—ed.]. It’s epic; it’s got more werewolves than you can shake a diseased cat at. It just seemed like a fun thing to do.

Omni: Switching to another fan-favorite character of yours, I have to ask: Have we seen the last of Jack?

Bill Willingham: [Long pause.] Good question. Jack is definitely dead. But if you follow that series, you see that we push things into the future a lot with him. We had 10 and 20 years passing between certain panels. Yes, Jack definitely dies—sometime. Have we seen the last of him since we not doing all our stories in the sometime but now? Probably not. Possibly not. Let me say, “Possibly not.”

Omni: I’ll take it. Let’s look at the end of another one of your creations—this time with [writer] Matthew Sturges in House of Mystery. The series closes its doors in August with the Desolation arc. Was this a natural stopping point for you and Matthew?

So I was there kind of at the beginning. At the point that we dumped it all on Matt’s lap, he’s been the captain of the ship ever since—and a wonderful captain. Whether it continued going or whether it was time to close up was entirely his decision. I’m a little sad to see it go because it was this lovely venue where any weird, quirky story that has no possible home could fit in this House of Mystery. The best series—Sandman proved this; Fables is pretty good at this; House of Mystery is the best at this—can generate any type of story at all. That is such a rare thing. I would not easily dispose of our storytelling machines, but it was not my decision. The nice thing is that in the last House of Mystery [issue] I got to write what would be my last House of Mystery story, so that’s a nice way to say goodbye and thanks.