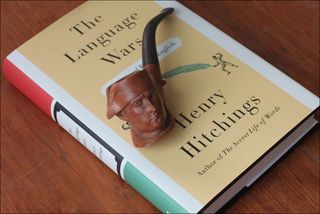 “One of James Murray’s most enduringly useful ideas was that English vocabulary has no definite limits,” quoth author and critic Henry Hitchings in his new study of our mother tongue, even as he goes about the business of defining its history in detail. Ranging from the Norman Conquest to the present day, The Language Wars guides us through the evolution of English in both theory and practice.

This is not a light read—quotation marks, endnotes, and parenthetical dates abound—but it’s not nearly as heavy as it could be, given its scope. Hitchings’ joy in exploring the nooks and crannies of English is infectious, due in no small part to supremely British phrases like “inveterate fusspots” and “queasy inverted commas” (referring to those oft-glimpsed quote marks). Try this on for a chapter subtitle: “On not being, like, disinterested in modern life’s meaningful aggravations?” For my money, that could only have been written by an Oxford graduate of the Beyond the Fringe school.

Therein lies the pleasure of this book, whether your interest in linguistic history runs hot or lukewarm: Hitchings has a vast amount of knowledge to share, but he’s self-aware enough to be cheeky about it. In one of my favorite passages, he neatly dresses down the “unexpectedly sloppy and inconsistent” pop grammar hit Eats, Shoots & Leaves while conceding its appeal to “a large number of people out of love with modern living.” Hitchings seems to be saying that sure, he gets it: Folks like to complain that things ain’t what they used to be, and English makes an easy target. You don’t have to wear armor to pick a fight.

But even these moments of disillusionment don’t manage to quell our inherent fascination with how words work. We can abuse, dissect, analyze, abbreviate, tear apart, and reimagine our language all we want—English always comes out on top.