Mad Scientist Cage Match: Which Talented Weirdo Will You Champion? 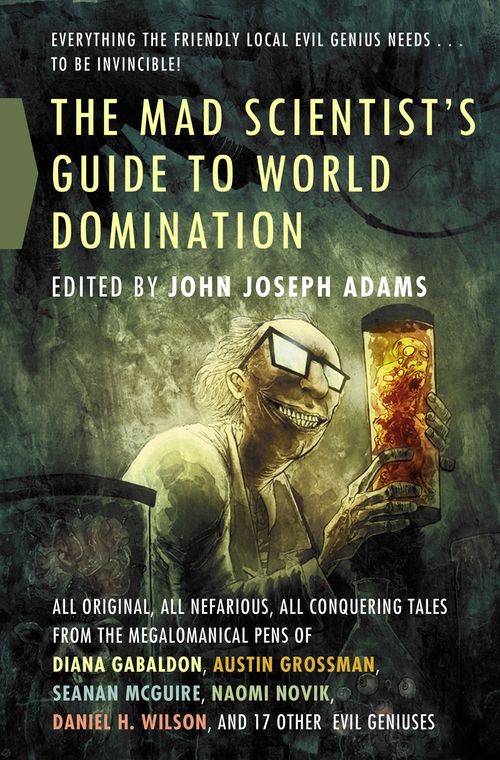 Billed as “original short fiction for the modern evil genius,” the new fiction anthology The Mad Scientist’s Guide to World Domination features delightfully villainous and entertaining tales from the likes of Diana Gabaldon, Austin Grossman, Naomi Novik, and Seanan McGuire. Edited by one of the science fiction, fantasy, and horror field’s best editors, John Joseph Adams, the book has been lovingly crafted. It features with a wonderful cover from Ben Templesmith and a very fun interior design that includes a whimsical preamble for each story. Exclusively for Omnivoracious, Adams has cajoled eight contributors into each championing their own particular mad scientist.

Which would you vote for—and why? Who else might trump them all? The best response will get a free copy of the anthology.

Dr. Victor Frankenstein. Everyone knows his name. He is the godfather of mad scientists. The first, the template, the model by which all others are crafted and judged. The goal, the primary mission of his endeavors: to play God. To manipulate the very mystery of life itself. His hubris is explicit and without boundaries. And when his experiments go horribly awry (as we know they must)—ah yes, this is where the “scientist” gives way to “mad.” We last see him sledding into the arctic in a futile quest to make right what he first made wrong. But can we trust his judgment about what's right and what's wrong? Do we dare?

They both wear white lab coats, they both do it because everyone laughed at them—they laughed!—back in high school, and they both have the word “science” in their names, so what exactly is the difference between a “scientist” and a “mad scientist?” As far as Dr. Jekyll is concerned, it means having the worst experimental methodology of all time. Rather than writing a protocol that involved tests on animal subjects before moving on to humans, the second Dr. Henry Jekyll whipped up a concoction that sparkled with pretty colors and he chugged it. Then, rather than staying in a controlled environment to observe and record the effects, he was out the door and trampling servant girls five seconds later. Rather than submitting his results for peer-review, he cowered in his lab, occasionally venturing outside to murder someone, or engage in light trampling. Needless to say, his results were irreproducible, and it turned out that the transformations occurred in the first place because of contaminated chemicals. It’s no surprise that he winds up killing himself. Being a mad scientist means even your worst mistakes are just alternate outcomes, but even the maddest of mad scientists would be ashamed to run a lab this sloppy.

The world is full of pretenders—senators who cannot govern, movie producers who can’t even do porn right, and scientists who tout their miniscule discoveries as if they were major accomplishments. But when Oppenheimer saw his first nuclear bomb explode, never has any scientist felt a greater thrill. Some scientists suspected that if we heated the atmosphere to 10,000 degrees, the heavens themselves would ignite and strip the world of its atmosphere. But Oppenheimer assured them that certain lightning bolts must have heated the air to that temperature, if only briefly, and that his bomb was safe. Yet when that mushroom cloud stretched over him, even he shrank in terror beneath it. He spoke the words from the Bhagavad Gita: “Now, I am become Death, the destroyer of worlds.” Surely he who can destroy a thing, ultimately, controls it. This world became his. Cower before him you sniveling pretenders—Frankenstein, Moreau, Jekyll. You cannot withstand the atomic bomb, and Oppenheimer, its master!

Let's get his bona fides out of the way. Dirigible? Yes. Secret floating city? Yes. Secret floating city hanging from a dirigible? Yes, and that's just in his first appearance. Luthor re-created the dinosaurs way back in 1940, and he was just getting started. Aerospace, powered armor, cloning (why do you think we even have Bizarro?), dimensional travel—you name it, he's done it. But Luthor is a mad scientist for the ages, not just because of brains, but the scope of his ambition and the depth of his character. Would Luthor let himself be chased around Europe by a stitched-together corpse? No, he picks the grandest of all opponents, the greatest bully super-heroism ever spawned: Kal-El the Kryptonian (“Superman,” if you must). You'd have to go back to Paradise Lost to find a tougher matchup, and one more meaningful for all of us. Luthor pits brains and un-augmented human flesh against unnatural brawn again and again, staking his life on the idea that being smart is worth something and makes a difference, even if the game is rigged, even if the entire rest of the world is rooting against you. That, sir and madam, is character. Greatest mad scientist ever.

Dr. Moreau: so awesome he doesn't need a first name. Played on film by no less than Burt Lancaster and Marlon Brando. Why all the fuss? Because you're talking about a man who, without proper sterile conditions or treatments to prevent organ rejection, was able to make men out of beasts. Who built his own private kingdom, with its own laws and customs (NO SPILL BLOOD). And who had the good grace to die at the hands of his tortured creations, as all the best mad scientists are taught to do. Dr. Moreau: too awesome for your small-minded human ethics.

Nikola Tesla is hands down the world's greatest real mad scientist. His scientific inventions are still in widespread use by millions of people over seventy years after his death, and include the arc-light, alternating current motor, and systems for transmitting electricity. Some argue he should be credited for inventing the radio, too. In classic mad scientist fashion, Tesla requested exorbitant sums of money from government officials, negotiating unsuccessfully with the Prime Minister of Great Britain for 30 million dollars (about a half billion dollars in today’s market) in exchange for a “defense ray machine.” Later, he declared that he was receiving messages from inhabitants of either Mars or Venus over his radio-receiving equipment. Finally, his nerd cred was impeccable. At the age of 17, he exposed himself to cholera to avoid required military service. In college, he organized the first intercollegiate activity in which a team from one university would challenge a team from another university: chess.

Doctor Emmet Brown is more of an inventor than a scientist, and whether he is truly mad might seem up for some debate. Absent-minded, sure, with a penchant for hanging out with teenagers… yes, that's a little weird. Where's the “mad” come in? Emmet “Doc” Brown lacked an important element in his construction of the famous flux capacitor (a device which came to him in a vision brought on by severe head injury). He required a high energy fuel source, and in 1985, only plutonium would do. But how did he go about acquiring this? He tricked Libyan terrorists by offering to build them a nuclear bomb, but instead filled it with pinball machine parts and used the plutonium in his pet project. This single action marks Doc as a force to be reckoned with. Beneath that goofy, wild-haired and wild-eyed exterior lies the heart of a coldly calculating master deceiver. While this plan seems to initially result in him being murdered by the terrorists…why is Marty there? Why is Marty ever there, for that matter? Clearly, Doc has long considered Marty to be an easily manipulated experimental test subject and back-up plan. He wears a pleasing demeanor around the teenager, but alone, we see the real Emmet Brown--a man obsessed with his creation, and willing to sacrifice anyone or anything for science, including his beloved pet dog, Einstein. What could be madder than that?! The events of the docudrama Back to the Future are all part of Emmet Brown's backup plan, should the terrorists find him.

Thomas Edison. There's a reason they called him the Wizard of Menlo Park. The man is brilliant and created his own compound of brilliant young minds to support him. They have “a stock of almost every conceivable material” according to Edison, that includes, “eight thousand kinds of chemicals, every kind of screw made, every size of needle, every kind of cord or wire, hair of humans, horses, hogs, cows, rabbits, goats, minx, camels…silk in every texture, cocoons, various kinds of hoofs, shark's teeth, deer horns, tortoise shell…cork, resin, varnish and oil, ostrich feathers, a peacock's tail, jet, amber, rubber, all ores…” If there's not already a solution to a problem, he'll just invent one. And if you get in his way, he's not above electrocuting an elephant to prove his point.