Carl Hiaasen's novels are always sure to surprise, whether they star a former Florida governor or, more recently, a down-on-his-luck restaurant inspector who wants his old job as a police detective back. Andrew Yancy returns in Razor Girl, the story of a kidnapping gone so wrong that a pseudo-redneck's beard will be cut, a crazy mistress will be swapped, and (spoiler!) a mongoose will meet a grisly end. But that's what happens in Key West—and in Carl Hiaasen novels.

Below, Hiaasen answers our questions about Razor Girl, bloodsucking-lawyers, and his thoughts on reality TV:

Amazon Book Review: Razor Girl is your second book to feature food safety inspector (and former police detective) Andrew Yancy, after his debut in Bad Monkey. What drew you back to Yancy, his goal of getting his badge reinstated, and his passionate defense of the Key deer who live next door to him?

Carl Hiaasen: I’ve never before had the same main character appear in consecutive novels, but I liked Yancy and his attitude, and I was curious to see what would happen to him after Bad Monkey. And I liked the idea of him still trying to get his detective job back while he’s stuck on roach patrol. The setting in the lower Florida Keys was appealing, too. Key West has endless possibilities for weird plots and characters.

Carl Hiaasen: Ironically, I come from a family of lawyers – my dad, my grandfather, and now my oldest son. And some of my very best friends are lawyers, though they don’t resemble the ones that appear in my novels. Unfortunately, Florida is a mecca for the shyster element, and there are apparently no rules on the kinds of advertising a lawyer can do. The TV commercials, which are endless and fairly crass, gave birth to Brock, the bad-lawyer character in Razor Girl. In real life you can find even sleazier examples than him.

You don’t seem to be a fan of so-called reality shows either….

Carl Hiaasen: Are you kidding? I love reality shows. The folks who dream up some of these concepts are either geniuses, or totally stoned. I mean – “Naked and Afraid”? Seriously?

I’m sort of fascinated by America’s fascination with rednecks, the whole Duck Dynasty thing. Being a white guy from the South, I find it amazing that so many TV viewers are enchanted by beards, bad dentistry and moonshine accents. Also there’s this false notion that this is a regional phenomenon, when in fact every state in the union has hardcore rednecks. No exceptions.

So, when I was writing Razor Girl, I thought it would be fun to have a redneck TV family that was really just a bunch of actors who had to be trained to be rednecks. That’s not so farfetched, if you know how Hollywood works.

You wrote a book a while back called Team Rodent: How Disney Devours the World. If anything, Disney has devoured an even larger chunk of the world since then. Have your thoughts about the Disneyfication of America changed?

Carl Hiaasen: Disney is just Disney. It’s a company that’s very good at what it does – controlling and promoting an image – until something happens that it can’t control or cover up. That dreadful alligator attack in Orlando a few months ago would never have happened if Disney had put up real warning signs, like other Florida resorts do. But wild alligators don’t fit the Disney image, so they were no proper warnings, and a child died for no reason.

And now, of course, Disney is scrambling to put up signs and barriers on its lakes.

Florida gets a lot of flack. But Floridians are fighting back. Dave Barry has a new book called Best. State. Ever. in which he defends the awesomeness of Florida (though he does also mention the razor girl incident, which falls into its own category of awesome). As a longtime resident, what do you love about Florida?

Carl Hiaasen: I was born and raised here, so I still have tremendous affection for the state – especially the few wild places that haven’t disappeared under concrete. What’s left is still worth fighting for, and that’s why I stay. A bonus, being a writer, is that the true-life source material is fabulously bizarre. There’s so much corruption, violence and free-floating depravity that the well never runs dry, whether you’re a novelist, a journalist, or both. I still do a weekly opinion column for the Miami Herald, and it’s like shooting fish in a barrel. Rotten fish.

You write books for younger readers as well. What’s most difficult about writing for two different audiences?

Carl Hiaasen: It’s actually not very hard to re-set between the adult novels and the ones for younger readers. The narrative voices are very similar, the smartass attitude, the environmental battles. Kids love books that are irreverent and challenge authority, when authority is arbitrary, greedy or foolish. They also love it when you make fun of grownups, and I’ve spent my whole life as a writer doing that.

Carl Hiaasen: Right now I’m working on another book for young readers. I can’t say much about it because it’s early, and I have no idea where the plot is going at the moment. But the characters are pretty smart, so I’m sure they’ll figure things out. 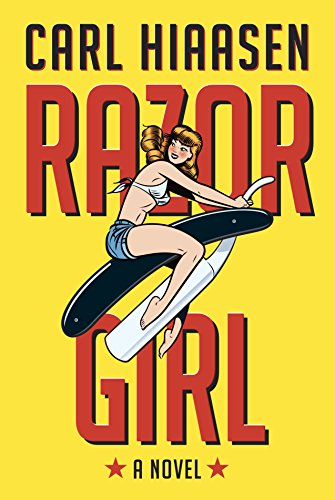