"It's been mind-blowing!" - Talking to the author of "Red, White & Royal Blue" 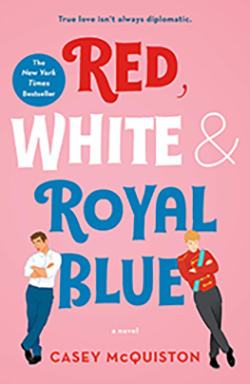 A couple of years ago, Casey McQuiston was an aspiring author. Now she's a best-selling author with a movie deal. Her fun, charming novel Red, White & Royal Blue asks the kind of question that leads to best-selling fiction (and movie deals): What happens when America's First Son falls in love with the Prince of Wales?

As it turns out, lots of people want to know, and readers have fallen in love with McQuiston's well written, offbeat romantic comedy. The book was just published in mid-May, but -- as of this writing -- it already has 225 reviews on Amazon (for an average of 4.7 out of 5 stars). And on Goodreads it has a whopping 7,516 ratings, 2,855 reviews, and an average of 4.52 stars. And, as I mentioned, it's a best seller.

I reached out to Casey McQuiston, because I enjoyed her book (I could not believe it was her first novel) and because I wanted to know what it's been like to experience the writer's version of going from zero to sixty in 4.2 seconds.

Chris Schluep: First of all, is this really your first novel? What were you doing before you wrote Red, White & Royal Blue?

Casey McQuiston: It really is my first! I studied mass communications in college and worked in magazine publishing for years before writing this book, which started as a passion project in my spare time. I’d attempted plenty of other books—mostly young adult fantasy—before I figured out that my genre was romantic comedy.

Where did the idea for the book come from?

This book was first born in the middle of the 2016 presidential primaries, a time in which I was obsessively following election news, watching a new season of "Veep," reading The Royal We by Heather Cocks and Jessica Morgan, and plodding through a very comprehensive Hillary Clinton biography. All those things, plus my lifelong love of romantic comedies, came together in the first spark of the premise: a member of the first family having an affair with a member of the royal family, and how the world would react.

Right, your bio says that your first love is “joyous, offbeat romantic comedies and escapist fiction.” What are some of your favorite books?

I’ve always been a sucker for dry humor and banter, so my favorite authors span across fiction, non-fiction and poetry: Oscar Wilde, Dorothy Parker, Carrie Fisher, Nora Ephron. I’ve been loving the wave of romances and romcoms taking the mainstream by storm lately by authors like Helen Hoang, Jasmine Guillory, Alyssa Cole, and company. The most recently released book to jump on my all-time favorites shelf is The Seven Husbands of Evelyn Hugo by Taylor Jenkins Reid.

Red, White & Royal Blue is poised to be the next big joyous, offbeat romantic comedy since Crazy Rich Asians. What has it been like to receive so much attention for it?

It’s been mind-blowing! I always loved and believed in this book, but I never imagined so many people would engage with it the way they have. All any writer can do is put their heart on the page and hope for the best, and I’ve been incredibly lucky that my heart has been something people have enjoyed reading. As a queer person, the best part of all this is the pile of messages and emails I’ve gotten from other queer people who feel encouraged and seen by this book—we deserve to be the stars of bright, shiny, fun romantic comedies, too.

And now it’s going to be a movie?

That still sounds unreal to me! I could not be more excited to be working with Berlanti Productions and Amazon Studios to bring this baby to life. It feels a bit sacrilegious to say as a person who writes books, but I actually pull most of my creative inspiration from movies and television, so this book was always a huge cinematic ride in my head. Getting a chance to see that picture in my head actually hit the screen? Nuts. I can’t wait to see how it comes together!

Is there going to be a sequel?

That’s one question I can’t officially answer right now, but I can say that I think there are a ton of threads and characters in this book that I would love to spend more time exploring! There’s a lot going on in this book, from Henry’s royal relatives to the entanglements of June, Pez, and Nora, to the private lives of characters like Zahra or Luna or Cash. I could imagine a million stories in this world that haven’t been told yet.