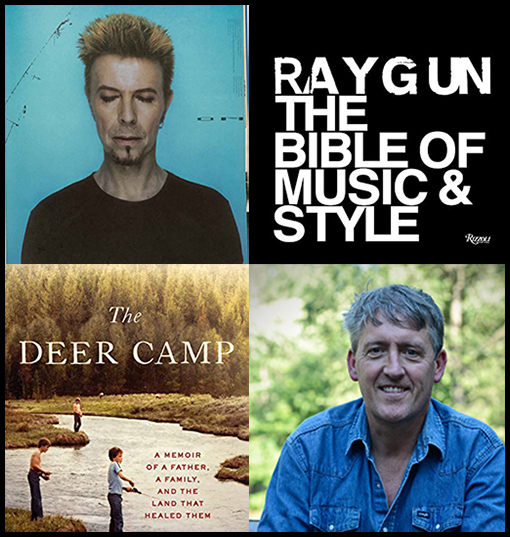 The two kinds of books I love best are nature writing and music writing. Dean Kuipers is my kind of writer.

In May, he published The Deer Camp, a moving memoir that we selected as one of the best books of the month. It's a sometimes rough, ultimately uplifting story: Kuipers's dad, Bruce, was a deficient father, prone to rage, violence, and a great deal of emotional abuse. He was an even worse husband, abandoning his family for weekends, months, and years in mostly open pursuit of other women, occasionally returning to re-assert control. When Bruce called out of the blue to announce that he had purchased 100 acres of prime hunting grounds near their Michigan home — intended as a place of reconnecting with his three outdoorsman sons — Dean and his brothers were intrigued, but reluctant to take him seriously.

But the land captured their imaginations, even as Bruce strained to maintain the same autocratic control over the wild space that he wielded over his family. The brothers gradually eroded their father's stubbornness, initiating a project to restore the land, and as the environmental scars of the deer camp were healed, the old familial wounds became manageable, if not eradicable. The book is raw, personal, and deftly written, and it seems likely that it was both a necessary and difficult project. The Deer Camp will please readers of two kinds of history: natural and family.

But before he was a writer of wilderness-tinged autobiographies, Kuipers chased music stories. His work appeared in numerous notable outlets including Spin, Rolling Stone, and the sadly, somewhat short-lived Ray Gun. Created by Marvin Scott Jarrett, this striking monthly grew out of the early '90s 'zine culture, focusing on music and pop culture while adding a heavy dose of cutting-edge graphic design, which remarkably still holds up. Kuipers wrote and edited for the magazine, publishing features and interviews with artists ranging from the underground to the iconic. Earlier this year, Kuipers revisited Ray Gun along with Jarrett and a host of contributors including Liz Phair and the Flaming Lips' Wayne Coyne. Their efforts are manifested in Ray Gun: The Bible of Music and Style, a deluxe retrospective that resurrects many of its best articles for new readers while faithfully replicating the vision of the original.

Here Kuipers shares his thoughts on Ray Gun, followed by an excerpt including part of his March 1997 feature on David Bowie.

Dean Kuipers on editing the new book: Ray Gun: The Bible Of Music And Style

Ray Gun was more than a glossy magazine about the best indie rock or post-punk music of the 1990s; its real subject was graphic design. It was journalism rendered as artwork. Sometimes that was hard for journalists like me to accept. We wanted the words or photos to shine. But when Ray Gun publisher Marvin Scott Jarrett called me in 2017 and said he wanted to put out a book of the best spreads and covers, I was right there. It didn’t have anything to do with the environmental writing I do now, and yet it did, because sometimes you have to follow the infinitesimal detail to get to the big picture. The 60 issues of Ray Gun anthologized in this book are a big-picture bible.

The fanzine’s stock in trade is to feature stars “as they really are,” trading in gossip and so-called facts about their lives. Ray Gun worked differently. Its superstar designers David Carson, Chris Ashworth and Amanda Sissons, Robert Hales and others assumed instead that readers are more than smart enough to understand the music as art, so used the work of Bjork or J. Mascis or Massive Attack as a jumping-off point for creating new art. David Bowie, Michael Stipe, and a huge cadre of top photographers and illustrators volunteered to create work for Ray Gun because it was a place for them to experiment.

Ray Gun has aged brilliantly. Partly because editor Randy Bookasta picked great music to cover in the magazine. But these pages also look like they rolled out last week. They were definitely of a time, but evidently that time is still now. As a writer-editor for the magazine, I was lucky to have been able to interview my heroes like Bowie and Kim Deal and Iggy and Neil Young. But we’re all lucky that these pages exist – like online media cannot – as an immersive document of the now. Want to know how artists in the 1990s shaped pop culture today? Dive in.

Excerpt from Ray Gun: The Bible Of Music And Style 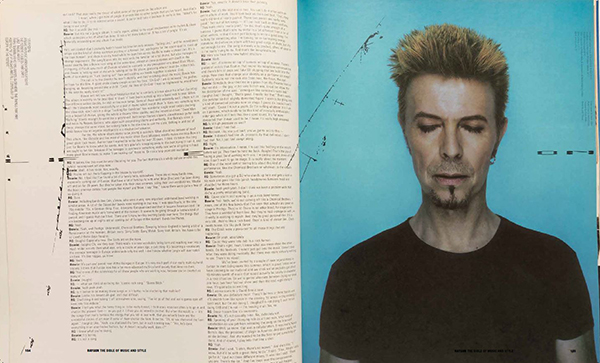 David Bowie and I first met in 1995 at the Chateau Marmont for a feature I was writing for huH magazine. He ushered me into his room, thin as an alley cat, chatty, putting me at ease; as I set up at a small table, Bowie talked excitedly about the graphic possibilities that he saw in RAYGUN’s stable of magazines, which included huH. In them, he saw a graphic analog to the hybrid approach he’d used to make his new album, Outside.

We got on famously after that. He was fascinated by the idea that a magazine might be deconstructed to the point where unforeseen communications might emerge. It was another venue for the birth of the radical. He and Brian Eno had written Outside in a studio process meant to purposely evade regular songwriting practice, beginning by interviewing outsider artists at a psychiatric hospital. During the recording, Eno had created characters to get the band members out of their heads. For example, he told bassist Erdal Kizilcay: “You are a musician in a soul-Arab band in a North-African role-sex club.” Because it’s Bowie, the experiment almost inevitably turned up a few memorable songs, including “The Heart’s Filthy Lesson.” But a lot of the album was about turning mainstream rock inside out. Similarly, he was curious to see whether the visual treatment of our story would reveal anything new. But what did he mean by “new”? Something new about him? Something new about the function of media or music? What was he hoping for that could be conveyed in a magazine layout?

At the root, he was hoping for a new world. I know that’s a bit much to ask from a magazine, but it didn’t matter what the medium was, really: in almost ten years of talking and working together with Bowie, I learned that he had a deep faith in art as cultural transformation. If a song were a pathway to another way of being or a different society, why not a magazine page? Why not a restaurant menu or a pair of pants? Bowie’s faith in art assumed this new and better world was just there, just to the left (as it were) of the one we already know, and that one day it would reveal itself. A shift of perspective might put it in reach. The graphic treatment of RAYGUN was that kind of shift.

The Deer Camp: A Memoir of a Father, a Family, and the Land that Healed Them
Dean Kuipers
Print Book Kindle Book
Ray Gun: The Bible of Music and Style
Marvin Scott Jarrett et al
Print Book