We recently had the opportunity to chat with bestselling author Rosamund Lupton about her debut novel (and one of our Best Books of June), Sister. Read on to see what Rosamund had to say about London, sisterhood, her next novel, and more. --Lynette

Amazon.com: Before writing Sister, you worked for many years as a screenwriter. How does the process of writing a novel differ from writing for television?

Rosamund Lupton: When I was writing screenplays I was just one part of a creative process, it would take the talents of many other people to bring the screenplay to life. With a novel, you know what you type is the finished thing--there’s just me--and that feels both daunting and liberating. As a screenwriter I was often ticked off for "directing from the page" or "writing a novel not a script!" Now, I love being able to use as many words as I like to tell the story--a hundred thousand in the case of Sister--and being able to write the interior life of a character as well as their surface interactions.

Amazon.com: I love the way London almost becomes a character unto itself in this story. The city seems to mimic Beatrice’s emotional state while she searches for clues about Tess’s death. Why did you select London as the setting? Did you spend time exploring the places Beatrice visits? 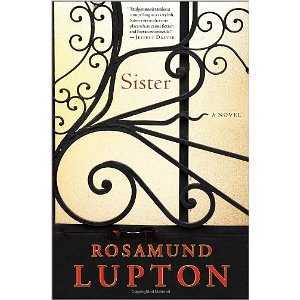 Rosamund Lupton: I chose London as I know it so well, I’ve lived here for many years, and because, as you say, it possesses a chameleon quality to show a state of mind. For example, Hyde Park in the depth of winter is covered in snow and silent, with leafless trees and is so different from a bright Spring day when the trees and grass are green and there’s children paddling in the fountain. I’m not surprised its been used so often for films; it has a cinematic quality and at the beginning of the book it’s like a black and white film set to me. I already knew all the places Beatrice visits as they are close to where I lived for many years, or worked, so the city is like an old friend.

Amazon.com: Sister is written as a letter from Beatrice to Tess. Why did you choose to structure the novel this way?

Rosamund Lupton: At one point, Beatrice says to Tess, "it’s a one way conversation, but one I could only have with you." I felt that writing it this way continually demonstrates their intimacy. Also, as a former scriptwriter, I found it easier to tell the story as one character speaking to another; as if it’s one half of a dialogue.

Amazon.com: Did your relationship with your own sister impact how you crafted the relationship between Beatrice and Tess?

Rosamund Lupton: I know as an older sister how protective and responsible I’ve always felt towards my sister and I posed the question, what would you do if your sister went missing? I knew that Beatrice in the book would drop everything and get the first flight to find Tess--as I think almost any sister would do. Although Beatrice and Tess are very different from my sister and myself, the emotional truth of their relationship is one I know well. Like my sister and I, the closeness between them is made up of a million tiny details rather than simply the "big things." Some small details are drawn directly from my own life. For example, my sister and I wrote to each other at boarding school, and used jigsaw letters and ones with invisible ink.

Amazon.com: Can you tell us anything about your next novel?

Rosamund Lupton: It begins with a mother running into a burning school to rescue her teenage daughter. The book continues to be about how far a woman will go to protect her family. It’s ultimately about love not recognizing any boundaries.

Amazon.com: Sister is bound to be on a lot of summer reading lists. What are you looking forward to reading this summer?

Rosamund Lupton: I have a big pile of books that are looking so enticing, I can’t wait to have time to read them! At the top are Jennifer Egan’s A Visit from the Goon Squad and Sarah Winman’s When God Was a Rabbit.