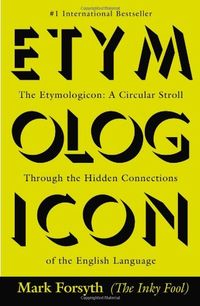 "If there's one thing that etymology proves conclusively, it's that the world is a wretched place," Mark Forsyth cheerfully informs us in his bestselling language guide The Etymologicon, out in a bright yellow paperback edition this month.

Marrying cheek and melancholy as only the British can (full disclosure for new readers: I'm half-English and addicted to Beyond the Fringe), Forsyth walks us through the workings of his frenetically interesting mind while unpeeling the layers of history behind common words and phrases. He traipses seamlessly from Pantheon to pandemonium, bunkum to bunk beds, pausing along the way to explain how fool's finger and leech finger evolved into their much less colorful modern counterparts, middle finger and ring finger. More's the pity.

I've read more books about words and language than the average bear, and sometimes (spoiler alert for future columns) they turn out dry and impenetrable. The Etymologicon is the opposite in all the best ways—easy to follow, free of jargon and footnotes, and uproariously funny—and I had trouble putting it down, even as Mr. Forsyth overstuffed my brain with obscure knowledge.

When a chapter on heroin follows a chapter on SPAM and the transition seems perfectly logical, you know you're in expert hands. The consequences of both words may be wretched, but you'll keep reading all the same.

Like the sound of The Etymologicon? Here's a treat for you: Forsyth's next book, The Horologicon, lands in the UK on November 1. Feel free to join me for a cuppa as I await the import.