Don Winslow on "The Border" 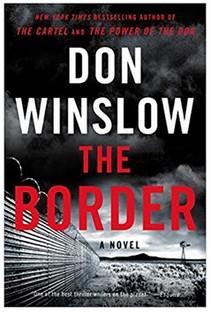 This week, Don Winslow released the highly anticipated conclusion to his much lauded Power of the Dog trilogy, The Border. Of this timely crime saga, Stephen King said: "Everyone in America--left, right, and center--should read this book. It's social fiction to rival Tom Wolfe and John Steinbeck." Here, Mr. Winslow describes what drew him to write about such a complicated subject.

I write about the border because I live there.

It’s not the crime ridden terror zone certain people would have you believe, but an area of great scenic beauty, open spaces and a beautiful blend of Anglo, Mexican and Native American culture. My neighbors are from all three groups, or a mélange of all three, and we look out for each other.  I share one fence line with an old cowboy straight out of a Marlboro ad and another with a group of Mexican horse breeders. We’ve never had an argument.  We don’t lock our doors in case someone needs a drink of water or a beer. We go to each other’s birthdays, weddings and funerals. I treasure those people. It makes me red-in-the-face, fist-clenching angry when people call them names.

I eat more tortillas than bread, on any given day have conversations that are part English, part Spanish and part Spanglish, I can talk football or fúbol, and the mothers at the school bake sales bring in bowls of flan so delicious I can taste it now.  I live on an old ranch that has relics of the Kuumeyaay people who used to collect acorns here, and who still live just over the ridge.  The ranch was once part of Mexico and before that was a Spanish royal land grant. I’m aware of that history every morning when I look out from my porch with that first great cup of coffee in my hand. I have a sense that I owe those people something - to live decently in this place, take good care of it, and give back what I can to the community.

If I want, I can have breakfast in the desert, lunch in the mountains and dinner at the beach. I hike verdant hills, run sere canyons, watch the sun set over the Pacific. I write about the border because I find the edge of things more interesting. I write, yes, about the physical border – and I have hiked, ridden, or driven every mile of it – but I also like to write about internal borders – the lines of morality, ethics, emotion and intimacy that we will or will not cross. And, if we do cross them, can we ever cross back? Those borders are fascinating to me. To me, they are at the heart of crime fiction.

I live on the border because I guess I like living on the edge. In my twenty-odd-years here we’ve lived through fires, floods, landslides, blizzards, droughts and recessions and we’re still here. Sometimes I’ll see an old neighbor across a restaurant or something and we just shake our heads and smile, sort of surprised that we’re still here, that our town hasn’t burned down, dried up, drowned or just withered away as so many small towns have. We know we live on the edge of being gone.

I wrote about the border because you write what you love.

You’d better, or else you probably shouldn’t write at all.